Fishing Cats Face Many Human Threats. What Can Be Done to Save Them? 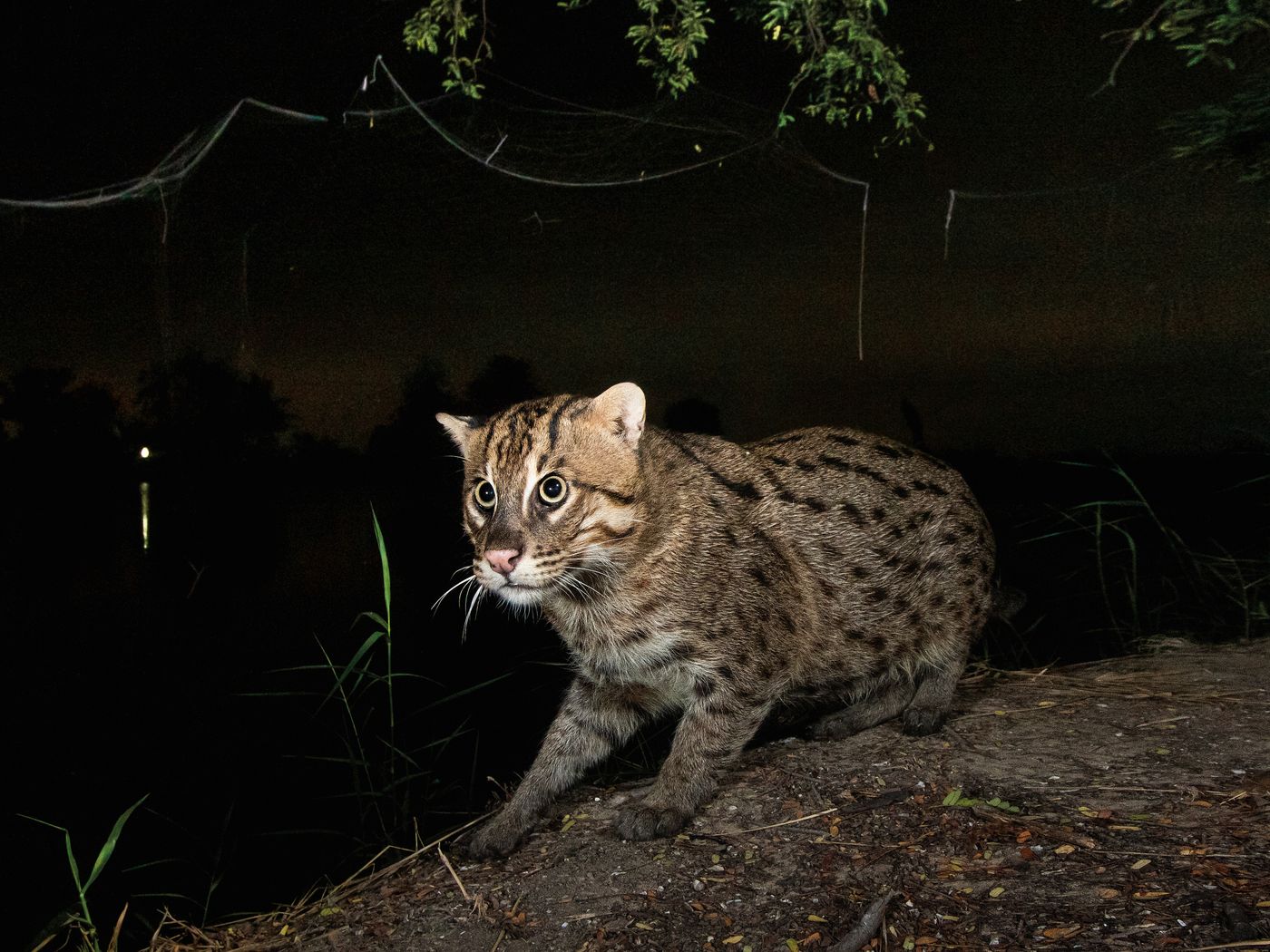 A fishing cat, Prionailurus viverrinus, in Koh Mon, Thailand, at a shrimp farm. Such facilities reduce the area inhabited by the shy animal, contributing to its decline.

The cry of the fishing cat sounds like the quack of a duck, and the rest of this midsize feline also seems tailor-made for the life aquatic. Its narrow, streamlined head is ideal for dips in the mangrove swamps and wetlands of South and Southeast Asia, its habitat, and its pointy ears even fold down during a dive, serving as earplugs. The short, stout tail works like a rudder; the back feet are partially webbed. The unusual half-retractable claws sweep through the water like anglers’ hooks, snagging prey, and the extra-thick coat guards against the damp.

“Fishing cats are habitat specialists, wetland specialists,” says Tiasa Adhya, an ecologist and co-founder of The Fishing Cat Project, a research and conservation group based in eastern India. Her research recently showed, via camera trap footage, that the shy animal has two distinct methods of catching the fish that make up the bulk of its diet. In deep water, the cat waits motionless on the banks for hours, very much like a domestic kitty contemplating a goldfish heist, before plunging in for the kill. (A favorite, naturally, is catfish.) In the shallows, though, the cat actively flushes prey from weedy hiding spots by stomping wildly about, like a kid in a puddle.

Now the fishing cat is facing another challenge: humans. The world has lost almost 90 percent of its wetlands since the 1700s, with Asia suffering the greatest decline. These days, intensive aquaculture, pollution and upriver damming destroy freshwater fish habitats and pit fishing cats against farmers, as the hungry felines swipe farmed carp and even the odd chicken or goat, and the farmers retaliate with poison, traps and knives. Once found along river systems from Pakistan to Vietnam, and from the Himalayan foothills to the tropical island of Java, the cats have vanished from large swaths of their range and are classified as vulnerable.

Casting about for solutions beyond the standard wetland-protecting litigation, conservationists are testing new approaches, including the commercial launch this winter of a type of indigenous (and by all accounts delicious) rice variety. Available only locally until now, its global sale could improve small-scale rice farmers’ profits and prospects, making the switch to industrialized aquaculture less alluring. Thriving on nutrients washed in by monsoon rains rather than on chemical fertilizer, the native rice also creates habitat for the fishing cat and its prey. The idea is that in healthy communal lakes where there is plenty to feed felines and fisherfolk alike, retaliatory killings are unnecessary. “Nobody takes a loss,” Adhya explains, “when somebody takes a fish.”