When Scott Kelly completes his year at the International Space Station in 2016, it will be the longest stint that any American has spent in orbit. It’s a privilege, he says, to be “the first U.S. crew member that’s asked to stay in space that long.”

Luckily for NASA, when Scott launches into space this coming March, he will leave behind a copy of himself—his identical twin brother, Mark Kelly, a retired astronaut. Because the Kellys have virtually the same genetic material, NASA can study how long-duration space flight affects the body and mind, using Mark as the control.

The twin study will help NASA prepare to take humans farther than ever before. “The horizon destination is Mars,” says NASA scientist Craig Kundrot. The idea to study the twins came after the agency first announced Scott’s ISS mission in late 2012. While preparing for a press conference following that announcement, Scott asked how he should address reporters' questions about having a twin brother who has also traveled in space. That got NASA thinking and the agency put a call out for study ideas. In March 2014, NASA chose 10 of the proposals from researchers at the agency and universities, and the twins signed on.

Before, during and after Scott’s flight, the Kellys will undergo physical and cognitive tests. “The weightlessness, the radiation, the isolation and confinement, there are a number of things that are really affecting the space traveler,” Kundrot says. Mark will undergo six tests; Scott will have about 11. One will assess how fluid in the body gets redistributed in microgravity. Another will gauge changes to blood cells and the immune system. The twins will provide blood, urine and fecal samples, have blood pressure and other measurements taken and use laptops to answer arithmetic and risk-taking questions. Scott says he’s excited “to do as much science on this flight as I can,” but he’ll leave the analysis to the scientists. “I’m an operator and a guinea pig,” he says. (A NASA spokesman says that the recent launch failure of an Antares rocket carrying equipment to the ISS will not affect Scott’s mission.)

The experiment isn’t perfect; the sample size is small, and Mark won’t be eating space food for a year while earthbound. “What we’re hoping for is a large number of clues as to what’s going on that can be followed up in subsequent studies,” Kundrot says.

The Kellys, 49, are from New Jersey and the only twins to have traveled in space. (A second pair may not be far behind.) Perhaps their following similar career paths—both were Navy captains before joining NASA—stems from some brotherly competition. “I do everything better than him,” jokes Scott, who is the younger of the two by six minutes. Mark’s response: “He’s actually worse at everything.”

Scott’s year at the ISS will be more than twice as long as his previous space mission. “Being any place for a year is somewhat of a challenge, especially when you can’t go outside and it’s kind of a confined, closed environment,” he says. While in space in 2011, that confinement proved even more challenging when Scott received word that Mark’s wife, then Arizona Congresswoman Gabrielle Giffords, had been shot.

“The control center called me and said…‘We’re going to privatize the space-to-ground comm. system in five minutes. The chief of the astronaut office wants to talk to you.’ When you hear that, especially on a weekend day, you definitely expect some kind of bad news,” Scott says. He still had two months to go before he could return to Earth.

Looking down at his home planet from the cosmos during trying times, Scott says, helped him notice “the lack of borders between nations and how fragile…it looks and how beautiful of a planet it is.” But, he adds, “despite its beauty and how serene it looks from space, there’s a lot of bad stuff that goes on here. And when your sister-in-law gets shot it emphasizes just bad things that people can do to one another.”

After his wife’s shooting, Mark participated in one final space shuttle mission and then hung up his spacesuit three years ago. Now he and Giffords run a political action committee, Americans for Responsible Solutions. In September, he and his wife released a book, Enough: Our Fight to Keep America Safe from Gun Violence, that revisited Giffords’ shooting and proposed changes to gun ownership rules. “She’s doing really well,” Mark says about Giffords.

Mark is excited to stay involved with NASA, though he concedes, “Nothing compares to just looking out of the windows of the space station. You look out the window for 10 minutes and you can see both the Pacific and the Atlantic Oceans. So I miss that. And when I think that it’s very likely that I’ll never see that again, I get a little bummed out about it.”

The Kellys say that even when one is earthbound and the other is in space, people confuse them for one another. Hopefully that won’t happen on launch day. 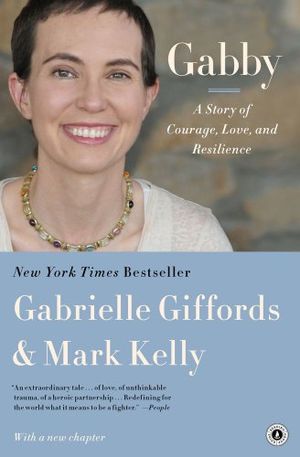 Gabby: A Story of Courage, Love and Resilience