The butterflies’ path, which stretches thousands of miles, is endangered by an array of challenges, including changes in climate and pesticides 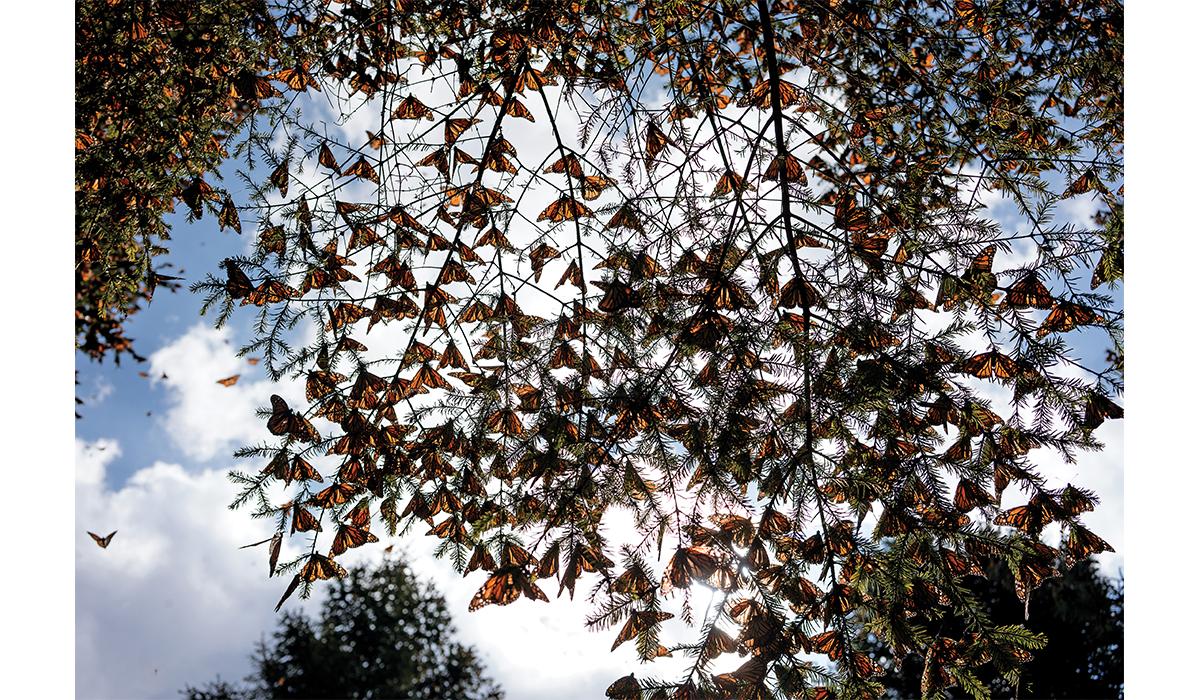 One of nature’s most extraordinary spectacles unfolds in the 10,000-foot-high conifer forests of Michoacán, Mexico. In mid-November, swirling orange-and-black clouds appear in the skies above the Monarch Butterfly Biosphere Reserve, a 139,019-acre sanctuary carved out of the Transvolcanic Belt by the Mexican government in 2008. Millions of butterflies alight on oyamel firs, pines and junipers. As the late-year temperatures dip toward freezing, the beautifully patterned insects fall into a sort of hibernation, after their several-thousand-mile migration. “The area has the microclimate the monarchs need to slowly consume their stored fat and stay alive,” says Alfonso Alonso, a conservation biologist and butterfly expert at the Smithsonian’s National Zoo & Conservation Biology Institute.

Only in the last couple of decades have scientists begun probing the central mystery of this astonishing odyssey: How do monarchs find their way to a tiny patch of forest in Mexico? A breakthrough came when researchers discovered that the butterflies possess a finely calibrated navigational system. It consists of a light-sensitive “sun compass” embedded in their antennae that directs them due south from their summer habitat in the eastern and central United States and southern Canada, and an internal clock that prevents straying off course as the sun moves across the horizon. “We still don’t understand how they find their precise way to the overwintering sites,” says Steven Reppert, a retired neurobiologist at the University of Massachusetts.

One theory is the butterflies use natural barriers—the Appalachian Mountains, the Rockies, the Atlantic Ocean—to channel themselves from north to south toward Michoacán, says Ryan Norris, an ecologist at the University of Guelph, in Ontario. He posits that monarchs—capable of flying 85 miles in a day—may rely on olfactory cues to reach the Mexico reserve.

Research by Norris suggests it may take three to four successive generations for monarchs to fly north out of Mexico, as far as southern Canada, before returning to the overwintering site the following year. His team captured monarchs from 17 states and two Canadian provinces, then tested their wings for atomic variations, or isotopes, of carbon and hydrogen, acquired from milkweed. Monarchs lay eggs on the flowering plant and feed on its nectar, which also furnishes toxins that make the insect unpalatable to predators. The researchers compared each butterfly’s carbon and hydrogen isotope signature with isotope signatures of milkweed varieties in different parts of North America. Thus they drew a map that traced the insects’ origins and movements.

“Monarchs don’t fly at night when they migrate; they need to be warm, and need the sun to orient themselves,” Alonso says. Some fall victim to strong winds, ending up off course. “There have been reports of butterflies that get pushed into the Gulf of Mexico and try to land on oil rigs.”

The epic migration faces increasing threats, from pesticides to climate change. Warming temperatures could be affecting cues that trigger the butterflies’ autumn and spring journeys. Also, farmers across the United States have been ripping up milkweed, which the butterflies depend on. In Mexico, the protected overwintering sites were under siege from illegal loggers, and a few avocado plantations have been established in the buffer zone. Last January, Homero Gómez González, manager of part of the biosphere reserve, who waged a vocal campaign to protect the land, was found strangled to death and dumped in a well. A tour guide was fatally stabbed days later; neither crime has been solved or a motive definitively established.

Tensions are also rising on the border, near Mission, Texas, where We Build the Wall, a privately funded anti-immigration group, constructed a three-mile-long barrier along the river, destroying habitat containing plants that migrating monarchs feed on. Marianna Wright, executive director of the National Butterfly Center, in Mission, which opposed the wall, had noticed a decline in migratory populations even before construction. “We could see the end of migration in my lifetime,” she says.

Monarch populations in Mexico have fluctuated in the past decade, reaching the lowest level ever recorded in the states of Mexico and Michoacán in 2013 to 2014, when the butterflies occupied only about 1.66 acres. During the 2020-21 overwintering season, though, monarchs covered 5.19 acres—an observation that some experts and advocates see as cause for optimism. Researchers estimate that 6.5 million to 8.1 million butterflies may occupy an acre of the reserve.

Few natural phenomena, Steven Reppert says, are more “mesmerizing” than millions of monarchs in the skies on their purposeful journey: “It’s a remarkable piece of biology that we need to understand and preserve.”