A new study shows that bramble and brush help the canines avoid attacks by the big cats, and may offer clues about where to reintroduce the dogs 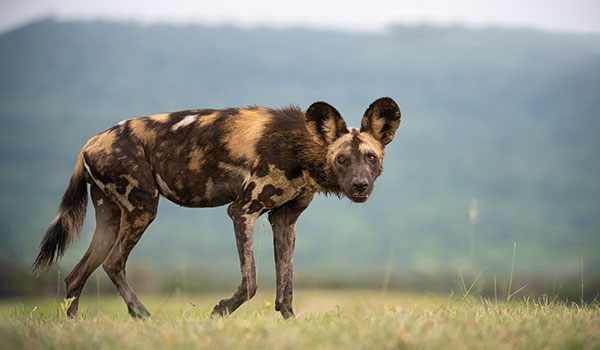 Mottled black-and-brown African wild dogs often prance and squeak through grasslands, chattering like birds. Weighing around 50 pounds, these canines may look cute with their pink tongues protruding from beneath their black noses, but tight-knit families and cooperative hunting techniques put wild dogs among Sub-Saharan Africa’s top predators. Packs can easily take down an impala or a wildebeest. But despite their prowess, there’s one animal wild dogs won’t take on: lions.

Even a small 300-pound female lion can easily kill a dog. Lions and wild dogs share some of the same prey species, like impala, so lions view dogs as threats to their food supply, and try to kill any dogs they can catch. For that reason, conservationists have long focused on reintroducing wild dogs—an endangered species—to areas where lions are scarce.

Andrew Davies had a feeling this didn’t need to be the case. Now an organismic and evolutionary biologist at Harvard University, Davies grew up in South Africa near Hluhluwe-iMfolozi Park—a 370-square-mile nature reserve that supports a healthy wild dog population despite also being home to many lions. “Lions and wild dogs have coevolved,” he says, adding that it makes sense that wild dogs have figured out ways to survive with lions around. Hluhluwe-iMfolozi is known for its highly variable landscape, with rolling hills, grassland, wide rivers and large floodplains. Davies had a hunch that all these features helped dogs survive in the presence of lions.

Through an international collaboration, he and other scientists combined a high-resolution map of the park with data from tracking collars on dogs and lions. They found that wild dogs are experts at hiding, and that taking cover in scrub brush, holes and gullies helped them circumvent lions and escape death. This finding, published recently in Ecology, shows that wild dog conservation projects can succeed in areas with lions, if these areas have highly variable landscapes. Davies hopes this information will inform long-term conservation strategies that will hopefully rescue dogs from the threat of extinction.

“There’s this prescription that’s emerging for how you build a diverse park setting that will hold a diverse number of animals that can coexist with very lightweight management,” says Greg Asner, the director of Arizona State University’s Center for Global Discovery and Conservation, who was also involved in the study. His prescription involves building parks on land with many types of interconnected habitats so that dogs can easily access a variety of hiding places. “The habitat in that land that you’re protecting really matters,” he says. “Just as much as how much land you’re putting in for protection.”

British colonialists established Hluhluwe-iMfolozi Park in 1895. Hunters had driven popular game animals, like the white rhinoceros, to the brink of extinction. Even decades before the environmental movement, colonialists sensed that they should set aside space to preserve the region’s wildlife. Wild dogs—which kill livestock—were viewed as vermin, and were not on the list of animals to be conserved. By 1901, colonial officials had placed a bounty of one pound on the head of every wild dog. Farmers and hunters nearly eliminated them from Hluhluwe-iMfolozi and the rest of the region by the 1930s.

In 1980, a governmental wildlife conservation agency that’s now called Ezemvelo KZN Wildlife reintroduced wild dogs to Hluhluwe-iMfolozi. Scientists had come to appreciate these canines’ complex social structures and the role they play in balancing ecosystems. By eating impala, for example, wild dogs limit how much vegetation these grazers consume and allow plants to flourish. But despite conservation efforts, African wild dogs now occupy less than seven percent of their historic terrain. Scientists want to understand the conditions wild dogs need to thrive so that they can again offer ecological benefits throughout Africa.

To save wild dogs, conservationists need to learn how they interact with other predators. For their study, Davies and colleagues sought to understand the relationship between dogs and lions. To do so, the researchers combined LiDAR-generated maps with signals from radio collars placed on the different predators. Invented over 50 years ago and often deployed from an airplane, LiDAR bounces lasers off the surface of the Earth to glean information about the structure of the land below. The scientists paired their LiDAR maps with tracking data to create representations of what each animal saw as it moved through its surroundings. The researchers then assigned dogs numerous numerical scores that described characteristics like their proximity to lions and the ruggedness of the terrain they chose to move through.

Davies and his colleagues put these scores in ecological models and produced results that supported their hypothesis that dogs hide to avoid lions. Although Davies suspected the result, he was still surprised to see how often dogs stuck to moving through scrubby thickets. Even when the closest lions were roughly a mile away, the dogs still avoided being out in the open.

Scott Creel, a conservation biologist and ecologist at Montana State University who was not involved in this research, says he’s not surprised by these new findings because ecologists have long known that dogs go to great lengths to avoid lions, but that this study is a great step toward understanding how this avoidance happens. “This new study is a great contribution,” he writes in an email.

“This paper, what it does that’s different from others is that it really looks at the nuance of how that avoidance happens,” says Harriet Davies-Mostert, the head of conservation at South Africa’s Endangered Wildlife Trust, who is no relation to Andrew Davies. Since 2006, Asner and colleagues have been perfecting the combination of LiDAR and animal trackers. In this study, they analyzed the landscape with much higher resolution than would have been possible a decade ago. They also measured dog and lion movement more frequently than many previous publications. “As technology unfolds, you can make use of much more fine scale information to really tease apart what the mechanisms of spatial ecology are,” Davies-Mostert says.

Davies-Mostert joined the wild dog research community as a PhD student in the early 2000s and has long collaborated with the study’s authors, although she was not involved in the recent publication. She thinks that understanding the importance that rugged terrain holds for wild dogs may motivate ecologists to design new parks to include variable habitats with many hiding places. At the same time, she thinks current reintroduction efforts, which do not necessarily emphasize varied terrain, are still worth continuing. “Very rarely is conservation a perfect art,” Davies-Mostert says. She thinks that introducing dogs to landscapes that have other advantages, like ample prey, still have the potential to be successful.

And success with wild dog reintroduction positions parks to successfully conserve other animals. Davies-Mostert says that in addition to helping balance ecosystems, wild dogs indicate how healthy ecosystems are as a whole. Each pack needs around 200 square miles of range to thrive, so conserving dogs pushes park managers to establish large regions of undisturbed wilderness. In that wilderness, everything from plants up to top carnivores can thrive, and complex ecosystems can develop.

“If you’re successful in conserving an area that can contain wild dogs and secure them,” Davies-Mostert says, “the knock-on effects of that for many other species is really significant.”

The original photographs and extracts within this article are from Africa’s Wild Dogs: A Survival Story, by Jocelin Kagan. The book is published by Merlin Unwin Books, and is available from neighborhood bookstores and via online booksellers.