The mummy of Egypt's most famous—and most provocative—female pharaoh was identified this week. Queen Hatshepsut, who ruled Egypt for two decades in the 15th century B.C., was most likely obese and diabetic judging from her mummy, scientists said.

Her mummy had actually been discovered in 1903, but was deemed unimportant and laid in storage until the Discovery Channel funded a $5 million DNA lab at the Egyptian Museum in Cairo. 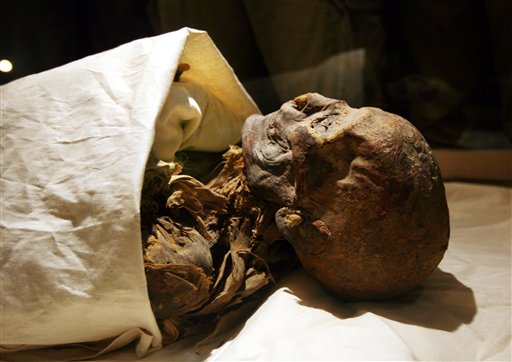 Hatshepsut is probably best known for her habit of wearing men's clothes, sometimes with a ceremonial beard (to emphasize her authority, some Egyptologists say), but she was also a skillful ruler under whom the Egyptian empire expanded and erected numerous monuments.

More powerful than Cleopatra or Nefertiti, Hatshepsut was widely depicted in carvings and hieroglypics, but after her death her successor (stepson Thutmose III) systematically defaced nearly all images or mentions of the queen. She was recently the subject of a blockbuster exhibit at New York's Metropolitan Museum of Art.

Cats, worshiped as divine by the Egyptians, also had a scientific breakthrough this week. DNA analysis of more than a thousand domestic and wild felines showed that they all evolved from a "single wild ancestor"--Felis silvestris--who prowled Middle Eastern deserts up to 131,000 years ago. Domestication, though, didn't happen until only 10,000 years ago, about the same time agriculture developed in the region.

Quite possibly, experts say, grain stores attracted rodents which, in turn, attracted cats. But it is unlikely that we domesticated them as in the case of cows or dogs; rather, they chose to domesticate themselves in order to continue access to easy and abundant prey.