For decades, people have written off birds as witless, driven solely by instinct and incapable of clever behavior. But now we know it isn’t so. Birds are smart, good at solving problems, learning, remembering, way-finding, even conversing in a meaningful way. And, like humans, some are smarter than others.

But how do you take the measure of a bird’s mind?

Scientists will tell you it’s a tricky business. There’s no standard avian IQ test, so researchers try to devise puzzles for birds in the laboratory, problem-solving tasks that will reveal their cognitive abilities—the capacity to open food containers, for instance, by pushing levers, pulling strings, swinging caps aside, or to navigate around barriers to find hidden foods. But all sorts of variables may affect a bird’s failure or success. For instance, boldness or fear. Individual birds that are faster at solving tasks may not be smarter; they may just be less hesitant to engage in a new task in a laboratory setting. So a test designed to measure cognitive ability may really be measuring fearlessness. 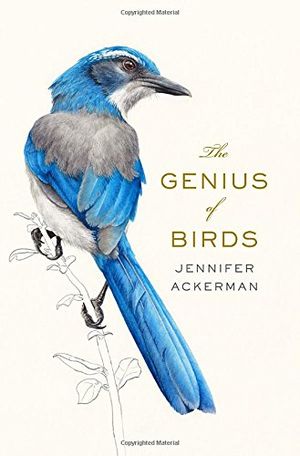 The Genius of Birds

In The Genius of Birds, acclaimed author Jennifer Ackerman explores the newly discovered brilliance of birds and how it came about.

Some years ago Louis Lefebvre, a biologist and comparative psychologist at McGill University who studies the bird mind, was struck by the possibility for another sort of measure, one that would gauge a bird’s cognitive ability not in the laboratory but in the wild. What about a scale of intelligence based on the idea that smart birds do new things—they innovate—in their natural settings? Birds with lesser mental skills are more set in their ways and rarely invent, explore, or dip into the novel.

Over the next years, Lefebvre scoured 75 years’ worth of bird journals for reports featuring key words like “unusual,” “novel,” or “first-reported instance,” and came up with more than 2300 examples of innovative behavior from hundreds of different species.

Some of these were daring discoveries of strange new foods: a roadrunner sitting on a roof next to a hummingbird feeder and picking off the hummers; a great skua in the Antarctic snuggling in among newborn seal pups and sipping milk from their lactating mother; a pelican in London swallowing a pigeon.

Other examples involved ingenious new ways of getting at food. There was the cowbird in South Africa using a twig to pick through cow dung. Several observers noted instances of green-backed herons using insects as bait, placing them delicately on the surface of the water to lure fish. One of Lefebvre’s favorites was the report of vultures in Zimbabwe that perched on barbed wire fences near minefields during the war of liberation, waiting for gazelles and other grazers to wander in and detonate the explosives. It gave the birds a ready-made meal, Lefebvre says, already pulverized.

Once the anecdotes were gathered, Lefebvre grouped them by bird family and calculated the innovation rates for each family. He also corrected his analyses to account for possible confounding variables, especially research effort: Some species are simply more often observed, so they’re more likely to be seen doing novel things. Later, he showed that birds with a lot of innovative behaviors in the wild tend to have bigger brains.

What are the smartest birds according to Lefebvre’s scale?

Crows, ravens, jays and other corvids were the clear outliers, along with parrots. Then come grackles, raptors (especially falcons and hawks), woodpeckers, hornbills, gulls, kingfishers, roadrunners and herons. (Owls were excluded from the search because they are nocturnal and their innovations are rarely observed directly, but rather inferred from fecal evidence.) Also high on the totem pole were birds in the sparrow and tit families. Among those at the low end were quails, ostriches, bustards, turkeys and nightjars.

When Lefebvre presented his findings at the annual meeting of the American Association for the Advancement of Science, the press picked up on the study, calling it the world’s first comprehensive avian IQ index. Lefebvre found the IQ idea “a little cheap,” he said. “But why not?” The notion caught on, and Lefebvre ended up being quizzed closely by interested journalists.

When one asked him to name the world’s dumbest bird, Lefebvre answered, “That would be the emu.” The next day’s headlines read, “Canadian researcher names National Bird of Australia ‘World’s Most Stupid Bird.’” This did not make Lefebvre popular in Australia. But his position was buoyed when he appeared on an Australian radio show, and one caller related a story of being in the outback with aboriginals, who told him that if he lay down on his back and raised his foot, the emus would come to investigate, thinking he was one of them.

Easy to laugh. But you have to remember that emus have been around for a very long time, a lot longer than we have. Who knows? They may possess their own distinctive brands of ingenuity we can’t yet measure.