These Moths Are So Gorgeous They ‘Put Butterflies to Shame’

To celebrate National Moth Week, bask in the beautiful variety of these oft-overlooked insects 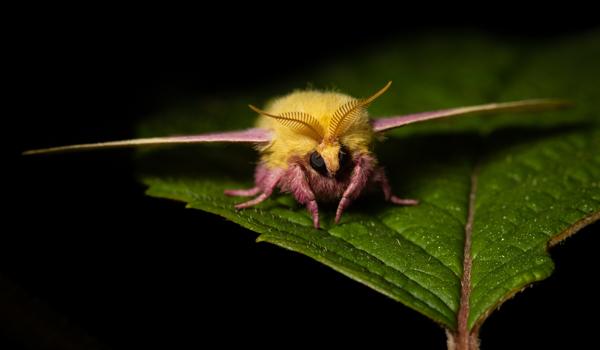 The fuzz of the fingernail-sized rosy maple moth may remind you of a teddy bear. Carla Rhodes

When the night falls and most people start to turn in, wildlife conservation photographer Carla Rhodes grabs her camera and heads outside.

She wanders out onto her yard in Woodstock, New York, and hangs a white bedsheet across two poles or her porch. Then she puts several blacklights above the sheet and waits. Soon, hundreds of moths will flock to the floodlit fabric like actors taking center stage, jostling for the limelight.

Rhodes has been photographing these critters on most nights since May in advance of National Moth Week, which falls this week from July 17 to 25. She picked up her passion for observing moths—known as “mothing”—last year at the height of the pandemic. On top of the lockdowns, she had a foot injury, so she couldn’t venture out on long daytime hikes and keep to her usual hobby of photographing birds. Instead, she found the ideal substitute activity: snapping pictures of moths, which are mostly nocturnal.

“It’s a perfect kind of pandemic activity,” Rhodes says. Mothing can be as simple as turning on the porchlight in your home and watching the moths it attracts. She adds, “mothing could be the new birding.”

Rhodes says every mothing night is different. When the night is colder, moth traffic isn’t so hectic, so she might head in early at 1 a.m. On hot summer nights, so many moths land on her sheet that she stays up until 4 a.m. to photograph the captivating crawlies. “When it’s warm, it’s going to look like Grand Central Station on a busy day in New York City, just insanity,” she says. Even fresh after a rain, Rhodes finds new visitors in her yard transformed—once, she caught a lesser maple spanworm moth in the act of sipping on raindrops.

Rhodes says that each night she’s stunned by the sheer diversity of the moths that drop in. She regularly spies moths so gorgeous they would “put butterflies to shame.” It’s hard to pinpoint a favorite, she says. She’s fallen in love with the giant leopard moth she observed at the start of the summer, its white wings adorned with eye-popping black splotches. The wavy-lined emerald moth is another favorite—she adores their white squiggles streaking across soft green wings. Her latest craze is the rosy maple moth that’s all decked out in cotton candy pink and feathery feelers. They remind her of teddy bears. To photograph this species, Rhodes endured a behemoth, jaw chomping Dobsonfly landing on her face while she captured the perfect shot.

“It blows my mind just knowing that that many creatures come out of nowhere; they're all there just waiting to be seen,” says Rhodes. “I don’t think moths are appreciated in the way that they should be.”

Moths are highly misunderstood compared to the butterfly, says Akito Kawahara, a curator of Lepidoptera at the Florida Museum of Natural History. They’re generally perceived as hairy or drab little things, but he says that they’re no less spectacular than their day-flying cousins. Even the brown ones that frequent the porchlight in our urban homes are beautiful in their own way, he says—viewers who take a closer look will notice the assortment of patterns among these moths.

Appearances aside, moths are ecologically important members of the ecosystem. They pollinate night-blooming flowers when bees and butterflies have closed shop for the day. Moths or their caterpillars are also vital food sources for birds and bats. They’re even valuable to humans too: The silkworm is the larva of Bombyx mori, the domestic silk moth. In recent years, a group of researchers discovered that wax-moth caterpillars can digest plastic, inspiring scientists to further scrutinize them in hopes to solve one of humanity’s biggest waste problems. Moths are diverse jacks-of-all-trade, says Kawahara, and they’ve wormed their way into all kinds of ecological and economical niches. “’Why study butterflies,’ I oftentimes say this in the field,” says Kawahara. “I still study butterflies, but the unknown in the moth world is extraordinary.” He adds, “they're doing things that we can never imagine.” He gave his daughter the middle name Luna, after his favorite moth—the luna, whose spinning hindtails scatter bat sonar.

Moths species outnumber butterflies by almost ten to one. There are some 160,000 species of moths in the world and even more that scientists still have yet to discover. But time is running out for scientists to study these creatures of the night. Around the world, moth numbers are plummeting. In the United Kingdom, moth populations have declined by over 30 percent since the 1960s. The main drivers of this trend are habitat destruction and climate change. Kawahara says that as temperatures rise due to global warming, moths in some places emerge too early from their cocoons after the pupal stage, so they overshoot flowering season. Without any available nectar for food, they starve to death.

“The situation with moths is pretty dire,” says Kawahara.

There’s one way the public can help, he says. People can volunteer as citizen scientists to document the moths they encounter. If a large enough number of households around the world participate, their efforts could help scientists track moth distributions and trends across the globe. The data will aid scientists in correlating the shift in moth numbers and movement to the shifting climate.

Officially declared by the New Jersey non-profit Friends of the East Brunswick Environmental Commission, National Moth Week is one of these efforts to spark public interest in moths. Participants host public moth nights, drawing regular hobbyists and first-timers to document moths and submit their observations to online research databases. Mothing can also be a private affair—National Moth Week’s organizers encourage the public to participate even from home.

The goal is to inspire people to take stock of the common creatures that go unnoticed in our backyard, says citizen scientist Liti Haramaty, who is one of the co-founders of National Moth Week. She says awareness will beget appreciation, which will spur the drive to protect our moth neighbors. “It’s a race against time because we're still documenting the natural world, but it's already changing.”

Haramaty studies marine microorganisms by day, but she's an avid moth-er by night. She became hooked ever since she saw six thumb-sized io moths, a genus with prominent hind wing eyespots, one night in 2012. The encounter, which she describes as “life-changing,” inspired her to organize a larger mothing event in the same year. This year, National Moth Week has registered over 1,200 mothing subevents across more than 60 different countries. Haramaty says one of her proudest achievements is converting her late father from a detached urbanite into a mothing fan. He was a frequent National Moth Week participant and a lifelong moth-er until he died in 2020.

As her father demonstrated, it’s never too late to start mothing, says Haramaty. The recommended tools are basic enough: a white sheet for the moths to land on and any light to attract moths. Black lights might draw more moths because the insects are more sensitive to their wavelengths. Haramaty also suggests brushing the sugary syrup from fermented fruit onto nearby tree trunks to lure in a greater number of moths, as they can’t resist snacking on this feed. She encourages participants to take photos and upload them through citizen science websites or apps such as iNaturalist.

Haramaty warns that the congregation of moths on a sheet can be a feeding bonanza for their predators, so people should moth responsibly. She advises to turn off the light lure before dawn, so that the moths scatter before birds arrive. And she adds viewers should never trap moths and respect nature.

Most of all, she says, have a good time mothing, just as her father had—as she, Rhodes, Kawahara and countless moth-ers all around the world have. “Having fun is rule number one,” she says.