This Winter, if all goes as planned, a caravan of livestock trucks will carry dozens of American bison out of Yellowstone National Park on a 500-mile journey into the past. Unlike their ranched cousins, which are mainly the result of 20th-century attempts to cross bison with cattle, the Yellowstone animals are wild and genetically pure, descendants of the original herds that once astonished visitors to the Great Plains and made the bison the symbol of American abundance. Until, that is, rampant hunting made it a symbol of mindless ecological destruction.

When the mass slaughter of 30 million or so bison finally ended at the turn of the 20th century, just 23 wild bison remained in Yellowstone, holed up in Pelican Valley. Together with a small number of animals saved by ranchers, that meager herd became the basis for the recovery of the entire species, Bison bison, which has been nurtured back to strength in the park.

Yellowstone has done its job so well, in fact, that the herd now consistently exceeds 4,000 bison, a number large enough to provoke fears of overgrazing in the park and of bison roaming beyond its boundaries. Park rangers have thus had the disheartening annual job of rounding up “excess” bison for slaughter or watching some step across the park’s northern border into a hunt that critics deride as a firing squad. Relocating the animals would be the humane alternative, except for a scary problem: Ranchers and others have long maintained that bison spread brucellosis, a bacterial infection that is devastating to cattle. A 2017 study by the National Academies of Sciences, Engineering and Medicine, however, determined that every case of brucellosis in cattle in the region over the past 20 years came from infected elk, not bison. That finding has made it harder to argue that wild bison shouldn’t be allowed out of the park.

The park service will ship the bison to the Sioux and Assiniboine tribal nations at Fort Peck Reservation, in northeastern Montana. A small herd of Yellowstone bison has been thriving there since a modest 2012 feasibility experiment. The plan is to build up that herd and to create a bison pipeline, says Robbie Magnan, the reservation’s fish and game director. As more animals arrive from Yellowstone, the Fort Peck tribes will gradually export bison—commonly called “buffalo” on the reservation—to start protected herds on other reservations and conservation lands.

On a practical level, the relocation program is simply a way to keep the Yellowstone population in check. But it is also much more than that. The move begins to restore wild bison to the Great Plains and the Plains Indians, who depended on them for food, clothing and shelter. “It has a real spiritual meaning for us,” says Magnan. “The buffalo were taking care of Native Americans from the beginning of time, and now we need to help them.” The fates of indigenous people and bison have long been intertwined in the eyes of the government, too: Federal agents 150 years ago proposed exercising control over the Plains Indians by eradicating the bison, in what Gen. William Tecumseh Sherman called “one grand sweep of them all.”

Renewed interest in the future of wild bison—including its 2016 designation as the U.S. national mammal—comes as the conventional account of their near extinction is facing fresh scrutiny. The story that eyewitnesses and historians have told since the 1870s is that the destruction of the bison, almost overnight, was the work of ruthless white hunters arriving by railroad and armed with the latest weaponry. But that account may be too simple.

Citing fur trade records, archaeological data and contemporary accounts, environmental historians such as Andrew Isenberg at the University of Kansas and Dan Flores at the University of Montana argue that white hunters administered the crushing final blow—but only after a century of environmental challenges and Native American over-hunting. The spread of horses on the Great Plains in 1680 onward gave tribes a new, highly efficient means of pursuing their prey. More Native Americans were also eking out a living from the fiercely variable Great Plains environment, as settlers displaced them from traditional territories, and commercial demand meant a huge market for bison hides.

Other researchers worry that this contrarian version of history will invite misunderstanding. “People hear only ‘Indians were involved, too,’” says Philip Deloria, a Harvard professor of Native American history, “and that has the effect of letting the others off the hook, and of letting the explicit military strategy of destroying Native American resources off the hook.” Deloria argues that the Native Americans’ culture, based on the idea of subsistence, prevented them from annihilating the bison in the same way white market hunters did.

It’s tempting to see a happy ending to this story in the restoration of the American bison: People working together can pull a species back from the brink; today bison are considered “near threatened” by the International Union of Conservation of Nature. But another battle over this shaggy, snorting symbol lies ahead, as ranchers face larger fears about a resurgent bison herd—competition for grass, water and other limited resources vital to their own uncertain future.

If we hadn’t been so busy hunting animals and destroying their habitats, where would they be living today? Biologists in Sweden and Denmark take aim at that question. Their innovative new database estimates the “present natural” ranges of all 5,831 mammals known to exist in the last 130,000 years. Most “current” ranges are smaller, but not all. Here, some notable changes in the Lower 48. 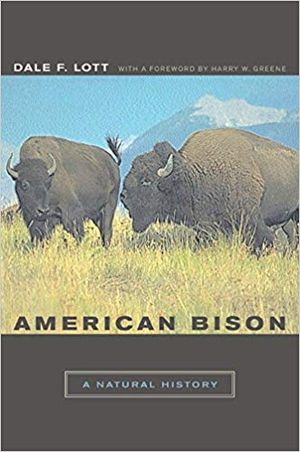 Richard Conniff, a Smithsonian contributor since 1982, is the author of seven books about human and animal behavior.