Evolution has become a bad word in some households. To the ire of scientists, roughly 42 percent of Americans don’t believe that humans are the product of evolution, and three states (Louisiana, Texas and Tennessee) have enacted legislation to allow the teaching of alternative theories, namely creationism, rooted in religious teachings in science classrooms.

Science and religion have always made strange bedfellows. Darwin himself had trouble grappling with the two. And the recent controversy isn’t even the first time evolution has been debated on the national stage. The 1925 Scopes “Monkey” trial remains ingrained in the American popular psyche. Last February, Bill Nye (of science guy fame) and creationist Ken Ham stepped into the well-worn shoes of Clarence Darrow and William Jennings Bryan to duke it out once again for three hours over Youtube. It got a lot of hype to say the least, and it’s hard to say who won. In part, that’s because the value of debating evolution is debatable in itself.

Nye is the first to admit that he isn’t an evolutionary biologist, but he does know a thing or two about teaching kids about science. Following the debate, the former television personality has embraced the role of evolution’s public champion with a new book, Undeniable: Evolution and the Science of Creation. This week we talked to Nye over the phone about his new book and America’s evolving view of science education:

Does evolution have an image problem?

No. I think humans have an unwillingness to face the facts problem. And by that I mean what I think makes us all have trouble with evolution is the clear, the obvious end to it all in which we die. I’m the first to admit it’s undesirable from my standpoint. Nevertheless, it seems to be the way of the world and that just makes us a little crazy.

In Undeniable, you mention death as one reason that some people find it difficult to accept evolution. What do you see as the other main reasons that people have so much trouble with it?

Most people cannot imagine how much time has passed in the evolution of life on Earth. The concept of deep time is just amazing. 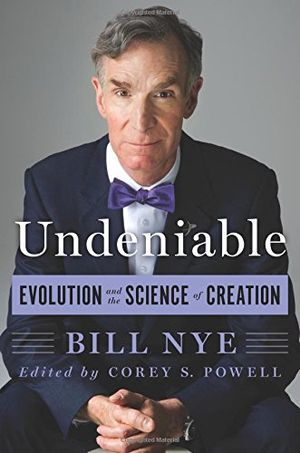 Undeniable: Evolution and the Science of Creation

Sparked by a controversial debate in February 2014, Bill Nye has set off on an energetic campaign to spread awareness of evolution and the powerful way it shapes our lives.

Who do you see as the primary audience for Undeniable?

People from 14 to 114—I don’t want to exclude anybody. I would say people who are interested in evolution. I would be delighted if creationists managed to read the book, but my experience is that once you’re a grownup, once you’ve made up your mind, you’re not going anywhere. You will outwit yourself and justify not accepting it at every turn.

Some social scientists would argue it’s near impossible to change what people believe. Let’s say a creationist does read the book. Do you think you’ll succeed in winning hearts and minds of creationists?

What I have found in this sort of thing is you don’t do it the first time. A person hears the arguments or is exposed to the arguments. He or she is not going to change his or her mind immediately. It takes several times through, so I hope this will plant a seed—that it will be a start of people discovering the fundamental idea in all of life science.

What do you hope readers take away from the book?

I encourage everybody to think about two things. First, really try to understand deep time. It’s an astonishing idea. And second, everybody take time to realize how close we are to investing in discovering life on another world. How easy it would be to do those last few investments to really look for life on a nearby world.

Some people criticized you for even showing up to the debate with Ken Ham. What would you say to those scientists who argue that evolution shouldn’t be debated because it’s not debatable?

Here’s what I acknowledge. In the past, scientists who debated creationists have been embarrassed or outwitted or outcompeted in the debates or in the discussion or presentation. I was not outcompeted or outmaneuvered. The idea is to draw attention to these people and their pseudoscientific belief systems, so that the next generation is not susceptible to these myths and they can become productive members of society and innovators and change the world. I think I did draw attention to this in a way that many people did not expect. And so the test of whether or not this was a good idea is not over the next six months so much as over the next six years. Because of the number of views on the Internet, this one was different from many of the debates in the past.

Did the debate change the way you think about creationism or creationists?

Well I spent a lot more time with it than I ever had. What’s so troubling for me is how diligent or focused they are—and by they I mean let’s say the management of Answers in Genesis—how focused they are on indoctrinating kids. They’re not messing around. They spend what looks like an enormous fraction of their resources on creating pseudoscientific curriculum materials, things that look like science quizzes or science workbooks all end with and there’s a book to make you ignore all of this. And that’s very troubling.

What do you think that Darwin would make of the skepticism about his theory today?

I don’t think he’d be that surprised. You know what he would be delighted at, though, is learning about radiometric dating.

Evolution is part of the basic foundation of biology, but you actually cover a lot of scientific ground in Undeniable. What sort of threat does skepticism of evolution pose to other fields of science?

The scientific method—this idea that humans have [come up with] as a means to discover what goes on in nature—is certainly, I believe, the best idea that anybody’s ever had. So, if you choose not to accept what you discover using that method, what else are you not going to discover? I guess it threatens everything: Our ability to generate energy, to build cars, to fight diseases, to regulate traffic. So not accepting the method by which we discovered evolution, you really are combatting all sorts of things you may not have intended to combat or ignore.

Do you think science and religion are reconcilable?

Well, they have to be. I’m not troubled by people’s religions the way many of my colleagues are. But, no matter what you believe, the Earth is not 6,000 years old. So if you have a religion that insists the Earth is 6,000 years old, I would encourage you to rethink that.

If you could take people anywhere in the world to show them evolution in action, where would you go?

Ellesmere Island, Canada, where Tiktaalik was found. Tiktaalik is the fish-apod. Its fins became feet and here we all are. People predicted they would find fossils of it, and they did. They predicted where, or what type of place, they would find it. The place used to be a swamp but now it is in the Arctic because of continental drift. That to me is extraordinary.

What puzzle of evolution would you most like to see solved?

Where viruses came from. Viruses cause us a lot of trouble. They cannot reproduce on their own. They wouldn’t exist without other living things off of which to exist.

What do you think was the most transformational moment in human evolution?

No one is sure what happened when we got speech, when we were able to communicate with language. And that sure made a heck of a difference.

I am charmed by the giraffe vocal chord nerve, the laryngeal nerve, that runs from the brain down along the lungs and the heart and back up to the vocal chords. It’s a long way around. If you were going to design it, you’d make the vocal chord barely the width of your hand in length. Because it evolved, it is descended from previous versions of animals that weren’t giraffes. This is the situation we find ourselves in. Each generation has to work with what came before. You can’t start over.

It has been 90 years since the Scopes trial, but many Americans don’t believe in evolution. Will we still be debating it in a century?

I think there will always be religious fundamentalists who have trouble accepting evolution. That said, I’m confident there will be a lot fewer of them. In 100 years, we won’t have much of it. In the next 50, there will be plenty.

Has your taste in neckties evolved?

Yes, I like them narrower now. I prefer ties of finer fabric. In other words, I can afford nicer ties.

Bill Nye will be speaking at a Smithsonian Associates event on November 19. For more information and to buy tickets, check out the event website.