Astrophysicist Mario Livio on the Intersection of Art and Science 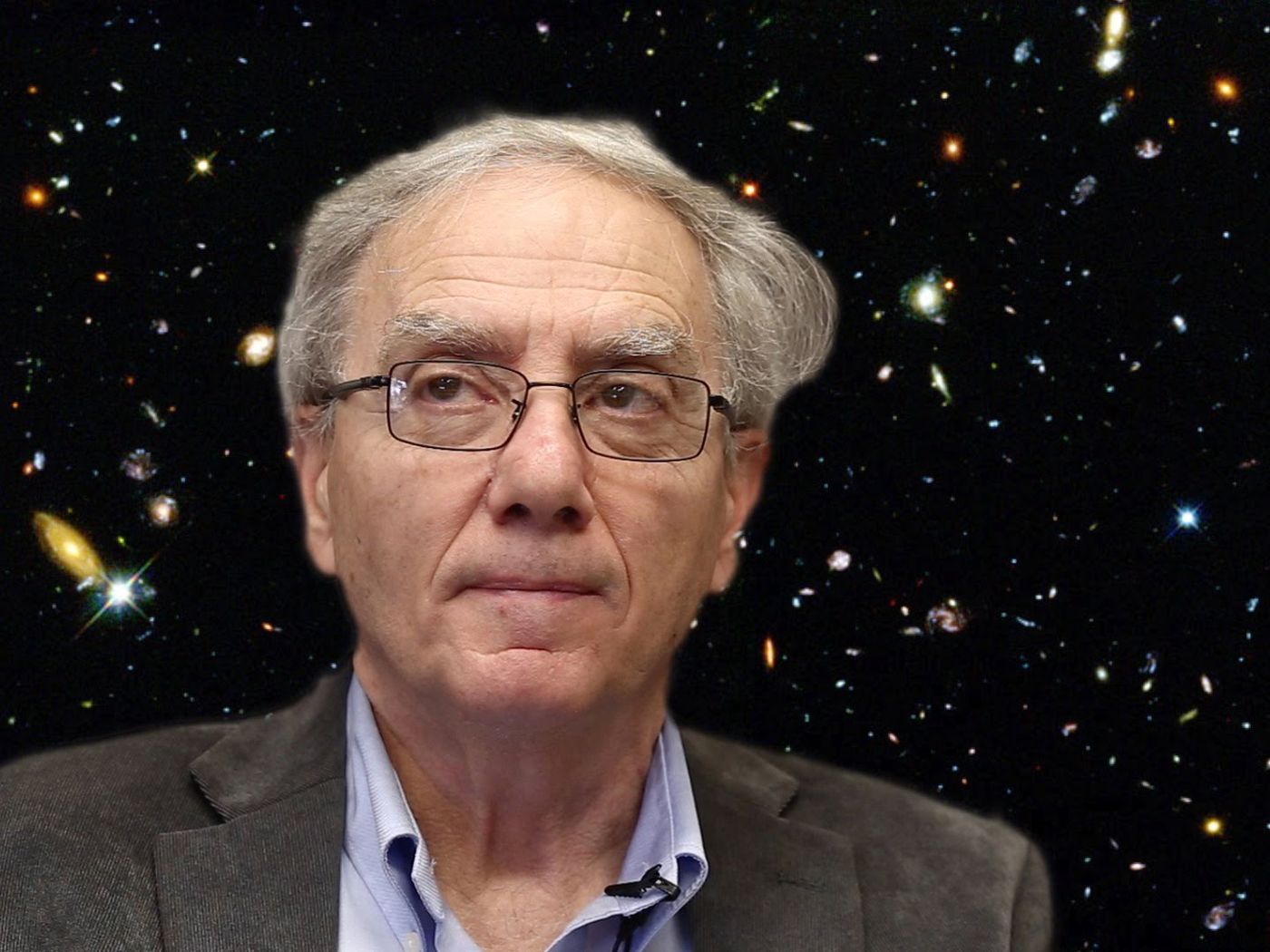 Mario Livio is an astrophysicist and author who worked on the Hubble Space Telescope (HST) for over two decades. Born in Romania and raised in Israel, he studied physics and mathematics, theoretical physics, and theoretical astrophysics before moving to the United States for the second half of his career. His research includes supernovae, dark energy, and the expansion rate of the universe. Livio often works at the intersection of art and science, which makes him uniquely qualified to expound upon our place in the universe, both scientifically and philosophically.

Livio has written several books about the role mathematics and nature including the golden ratio and symmetry as well as the origin of mathematics itself. His most recent book, Brilliant Blunders, talks about the importance of failure in the pursuit of scientific truth. He is the “Science Advisor” to the Baltimore Symphony Orchestra, and has recently collaborated with composer Paola Prestini on “The Hubble Cantata,” an orchestral piece inspired by Hubble images.*

You can keep up to date with Livio’s work via his blog for the Huffington Post and by following him on Twitter. I also highly recommend his TEDxMidAtlantic talk on curiosity.

I spoke with Livio last week about his experiences working on Hubble and how science informs our understanding of the world around us.

What drew you to science in the first place?

I always liked mathematics. Even as a child, I looked at things mathematically. I was also extraordinarily curious. I always wanted to know things like, why is the universe like this? Why are stars like that?

Did your interest in math and science come from your parents?

No, it was certainly not influenced by my parents—neither mathematics nor science. It's not something I saw at home. My mother was a singer and my biological father, whom I didn't grow up with, was actually a writer. The older generations in my family were Jewish and they moved from place to place in Europe; they didn't have much opportunity to study and so on. So even if some of them were extremely talented as mathematicians, they never had any opportunity to explore that talent. It had to do with some innate ability of sorts that I cannot trace to anybody.

In your experience, is science viewed differently in Israel than it is in the U.S.?

Learning in general was perhaps more emphasized in Israel at the time I was living there. Part of it is, in some sense, Jewish tradition. Learning was very much emphasized, in part to do with the tradition that the rabbi—the most learned person—was the most important person in society over many years. In fact, the first president of Israel, Chaim Weizmann, was a scientist. He was a biochemist. And a later president, Ephraim Katzir, was also a biophysicist. The fact that scientists were elected as presidents tells you something.

What brought you to the US from Israel?

Hubble. I was already a professor of physics working in astrophysics in Israel, and they (the Space Telescope Science Institute) asked me if I be interested in that. This was immediately after Hubble was launched, so I basically said to myself, "Look, if you're in astrophysics, this is a great place to be with the Hubble Space Telescope."

Before you worked on Hubble, were you already interested in science communication?

Yes, I was always interested in that. I always thought that it was very important for the education system, to inspire the younger generation and so on. While I was still in Israel, I did two NOVA-like programs and I was giving lots of popular talks, but I didn't always write books. At some point after giving so many talks I said, "Well wait a second, maybe I can take some of this and turn it into books."

My first book was directly related to astrophysics, and I had to do almost no research for it. I basically took my day job and translated it into popular language. While writing, I realized that the part I enjoy the most is the research. So I decided that I would try to write books that are not intimately related with what I do everyday so I would be required to do a lot of research for them.

My following three books were therefore more on mathematics. I wrote The Golden Ratio, which was about one number and everything it does, and I wrote The Equation That Couldn't Be Solved, which was really a book about symmetry. My next book after that was Is God a Mathematician? which is not about God so much but what the physicist Eugene Wigner called the “unreasonable effectiveness of mathematics”: why mathematics works so well in explaining everything in the universe.

I’ve always been intrigued by that question. In your opinion, is mathematics invented or discovered?

There are many mathematicians who think that it is discovered, but I think that the question is actually ill posed. I think mathematics is both invented and discovered. I believe that we invent the concepts, but then we discover all the relations, all the theorems around these concepts. When I say this to some mathematicians, they tell me I'm just hedging my bets, which I'm not. I'm saying that I think it's a statement of fact that mathematics is both of these things.

For example, imaginary numbers are not numbers. Humans had to invent them when they tried to solve certain equations. Once they invented them though, they discovered the whole world of the complex algebra that deals with imaginary numbers and a whole host of theorems about them. Those were discoveries. We had no control over those once we invented the concept.

You’ve been involved with several projects at the intersection of art and science. What do you think attracts artists to science, and vice versa?

I think the main connection, at least in my mind, is that scientists look at the universe around them, and on one hand they are in awe of it and on the other hand they are puzzled as to how it came to be. So they try to understand it and to explain the phenomena that they observe.

Artists also are in awe in the universe around them, but they don't necessarily try to understand how it works; they try to give their emotional response to what they see. In some sense, the scientists and the artists are both responding to the universe, but they respond in complementary ways.

Would you say religion is also a way of responding to the universe?

I'm not a religious person myself, but I became interested in this because for my new book (in progress, Why?: An Exploration of Human Curiosity). I looked into the “evolution” of curiosity. There is no doubt in my mind that the very first myths and spiritual quests in religion came as a result of the fact that people were curious about the world around them. They looked at this incomprehensible universe, and they tried to find reasons for how this or that came into being. In some cases, they decided on deities, but it as all part of the same type of curiosity.

At least I believe that at first it started as something like that, as this spiritual quest, and later evolved into things more like science and so on. It is interesting that in today's society, we see some conflict, but I believe that the origins actually came from the same thing.

When people take the scriptures and try to introduce them as if they are science (which was never meant to be the case), that's the conflict. If you want to use your religion to guide your moral, ethical behavior, and so on, there is absolutely nothing in science to prevent you from doing that. In principle, there is no conflict between science and religion. It is the introduction of an artificial conflict though when you try to use one as the other.

Do you think Hubble has had a significant impact on changing the public’s philosophical view of the world—not just their scientific view?

It certainly had an enormous—in fact, unique—impact in terms of bringing the excitement of discovery into people’s homes. Scientists are very enthusiastic about what they do and they are extraordinarily excited by new discoveries, but before Hubble, their findings were really almost exclusive to the scientists themselves. Maybe the newspaper said something about this or that, but people did not feel very connected.

The fact that Hubble images in particular were as stunning as they are, and coupled with a very efficient and innovative outreach program, has enabled many more people to participate in the excitement. I have no doubt about that.

And as part of that, there are certain scientific facts that were brought to the attention and appreciation of the public. Maybe part of that changed also their philosophical outlook if you like. There are people now who know through Hubble, that in our observable universe there are over 100 billion galaxies like the Milky Way. That has some philosophical implications.

I think for some people it's changed the relationship between the common person and science. When they are told we’ve discovered that not only is our universe expanding, but in fact it's accelerating, that also changes a bit your philosophical perspective. That gives you pause as to think, "Okay, where are we in all this grand scheme of things?"

Has your own experience working on the Hubble Space Telescope changed how you view your place in the world and in the universe?

On one hand, what we’ve discovered with Hubble and other telescopes is that, from a physical perspective, we are really nothing but a speck of dust. We are on a small planet around an ordinary star in a galaxy where there are hundreds of billions of stars like ours, and we now know that there are hundreds of billions of galaxies in the observable universe alone. There are even some people who speculate that there is a multiverse, and our entire universe might be only one of a larger ensemble of universes. So from a physical perspective we are nothing.

Yet, at the same time, everything I just told you, every single word, that we live on a planet that is around an ordinary star, etc.—everything single thing I told you was a human discovery. In other words, our universe expanded just as fast as our human knowledge expanded. In that sense, we are not just a speck of dust; we are absolutely central to all of this. We are central because it is our knowledge that taught us all of this. I think that is a very powerful concept. That on one hand our physical existence is insignificant, but on the other hand our knowledge of our existence is absolutely crucial.

*Editor's Note, September 15, 2016: An earlier version of this story erroneously stated that Livio was presently affiliated with the Space Telescope Science Institute (STSI). He resigned from the institute in 2015. Additionally, the story misstated that Livio collaborated with composer Russell Steinberg.