Long victimized by poaching and deforestation, the primate species is in the midst of a surprising rebound that is sparking new hopes of recovery 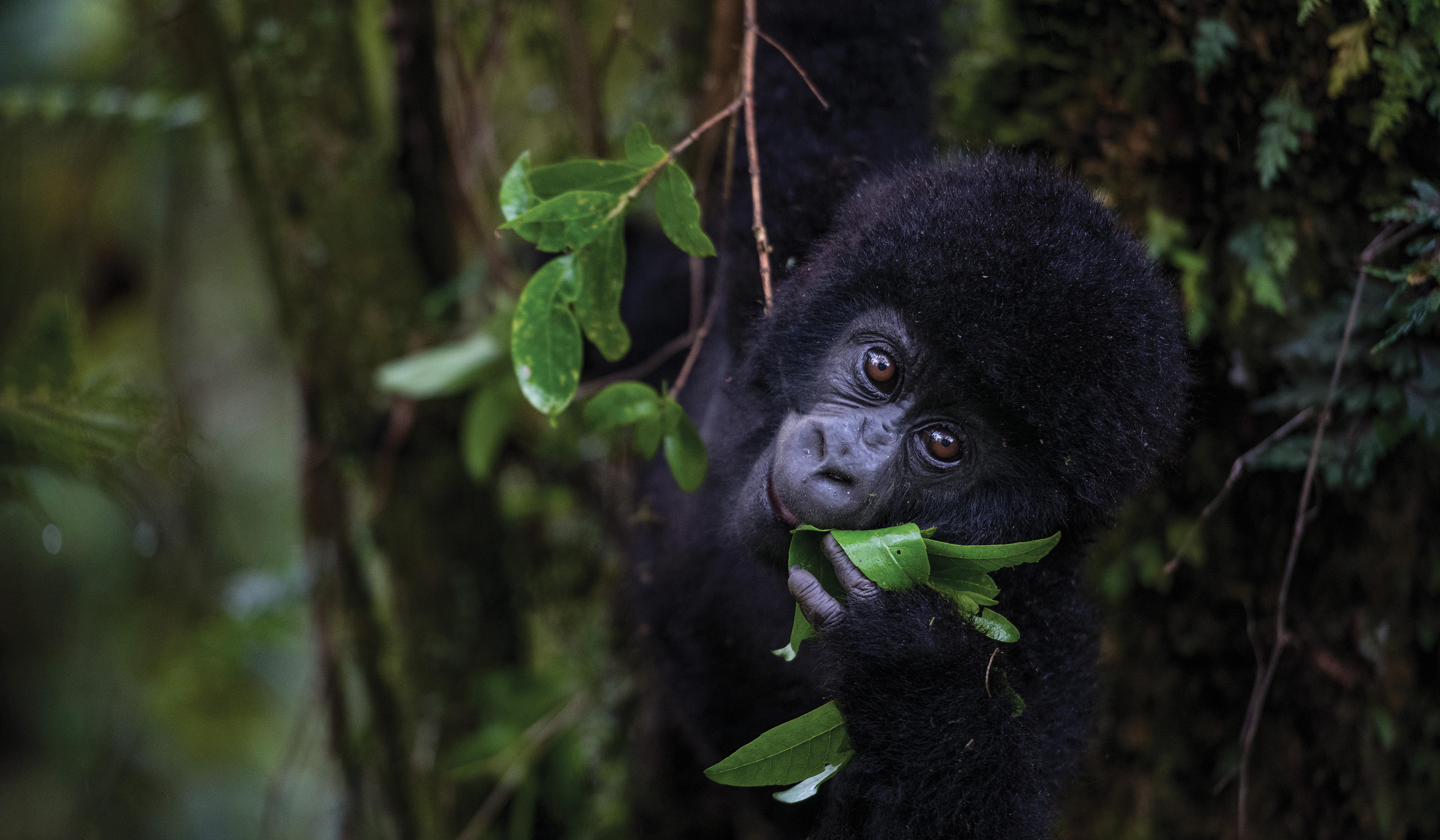 In Uganda’s Mgahinga National Park, a 14-month-old male named Imbanzabigwi is poised to transition from mother’s milk to foraging. Neil Ever Osborne

Photographs by Neil Ever Osborne; Text by Mark Jenkins

Mountain gorillas, today one of the most beloved wild animals on the planet, were little known four decades ago when the American primatologist Dian Fossey, commenting on a spate of brutal killings by poachers, warned that only around 220 of the animals were left. “The mountain gorilla faces a grave danger of extinction—primarily because of the encroachments of native man upon its habitat,” she wrote. Her 1983 book, Gorillas in the Mist, an affecting blend of field journal and memoir, and especially the 1988 feature movie of the same name, brought global attention to the animal’s plight. By then, as all the world was shocked to learn, Fossey, too, had been murdered, in her cabin in Karisoke, a research site in the Virunga Mountains of Rwanda.

She would not be the last person to put her life on the line for this noble creature: In the past 20 years, more than 175 park rangers in the Democratic Republic of Congo’s Virunga National Park, home to many of the world’s mountain gorillas, have been killed in the line of duty, with eight gunned down in 2018 and another killing last year. The park’s director himself, Emmanuel de Merode, survived an attempted assassination in 2014, just hours after submitting a report on illegal oil exploration in the park. Years after Fossey sounded the alarm, the killing of mountain gorillas continued. In 2007, Congolese mafia henchmen executed seven of the animals, reportedly to discourage officials from enforcing bans on producing charcoal in the park. Brent Stirton’s photograph of park rangers carrying the giant corpse of the silverback Senkwekwe stunned the world, renewing speculation that the mountain gorilla might not survive the rapaciousness of its primate cousin, Homo sapiens.

And yet: Despite a 20-year civil war in the Democratic Republic of Congo (DRC) that has killed millions of people, relentless poaching and an exploding human population, the mountain gorilla is making an amazing comeback, thanks to the selfless commitment of countless Africans. In 2008, field surveys estimated 680 mountain gorillas. Today, according to the most recent studies, there are 1,063. The new data prompted the International Union for Conservation of Nature (IUCN) to change the mountain gorilla’s status, from critically endangered to endangered.

“These population survey results signal a real recovery,” says Anna Behm Masozera, director of the International Gorilla Conservation Program (IGCP), based in Rwanda. “This doesn’t mean we’re in the clear. These are still very fragile populations. But the increase is incredibly encouraging.”

Living in cloud forests at 8,000 to 13,000 feet, mountain gorillas are entirely covered in long black fur, an adaptation to cold that distinguishes them from lowland gorillas. Their habitat is limited to just 300 square miles, divided between two locations. One is the Virunga Mountain Range, including the Mikeno Sector of Virunga National Park in DRC, Volcanoes National Park in Rwanda and Mgahinga Gorilla National Park in Uganda. The other habitat is located in the Bwindi Impenetrable National Park in Uganda and contiguous Sarambwe Nature Reserve in DRC. Both locations, once heavily wooded, are now surrounded by intense agriculture and dense human populations.

The mountain gorilla rebound is impressive in the light of the animal’s unhurried reproductive biology. Male gorillas reach adulthood at 12 to 15 years, and each social group of 5 to 40 individuals is led by a dominant silverback, a mature male, which lives up to 35 years. Females reach sexual maturity at 8 to 10 years. Gestation is typically 8.5 months and a newborn is a mere four pounds. A baby nurses for two to four years. A female gives birth to one baby every four to six years. For these reasons—delayed maturity, long gestation, predominantly singleton births and long intervals between births—mountain gorilla populations increase slowly. (By comparison, a female lion has one to six cubs after a four-month gestation and full maturity requires only three to four years.)

One key to the gorilla population increase, says Behm Masozera, is “long-term, high-level political support.” In 2015, DRC, Rwanda and Uganda signed the Greater Virunga Transboundary Collaboration, a treaty to foster conservation and develop tourism, including antipoaching efforts, habitat protection and wildlife surveys. “There is serious political will in all three countries,” says Masozera, and governments as well as NGOs such as the World Wildlife Fund are also working together.

Of course, gorillas don’t care about legal agreements and national borders. “One troop has migrated from the DRC to Rwanda,” says Andrew Seguya, executive secretary of the Greater Virunga Transboundary Collaboration. “Another troop has been moving back and forth across the border. The goal of the treaty was to create one landscape where all wildlife can find a home that is not limited by political boundaries. That the gorillas have responded so quickly is a reflection of the success of the treaty.”

But high-level diplomacy isn’t the sole reason for success, or maybe even the main reason, Seguya says: “What has really brought mountain gorillas back from the brink of extinction is community engagement and cooperation.”

Not long ago, people in communities adjacent to the parks tended to view the mountain gorillas as competitors. People were grazing cattle and hunting for bush meat in the parks, and sometimes facilitated the capture of baby gorillas in exchange for cash. Protecting the gorillas meant protecting the parks, which seemed to threaten the livelihoods of local residents.

A conservation initiative set to work raising awareness of the potential economic value of the mountain gorillas, especially to ecotourism. A gorilla guide would earn more than a gorilla poacher. Selling produce to a local lodge would bring in more money than hawking it on the street. Working as a manager in a hotel would pay better than herding cattle in the park. “Education and real opportunities have completely flipped their understanding of the situation,” Seguya says of the residents.

IGCP’s Behm Masozera agrees: “Village-level buy-in has been critical to the gorilla success story. People now feel heard by park officials. They partner with the park whenever an issue arises. Ten years ago the question was: Will mountain gorillas survive? Today, the question is: How can we sustain, even increase, the current population?”

According to the IGCP, there are a remarkable 45 gorilla groups that have now been habituated to tourism and research: 28 groups in Virunga National Park, 17 in Bwindi-Sarambwe.

Behm Masozera says money—cash from regulated tourism—has “been a great benefit to local and regional economies.”

A mountain gorilla tour is costly: approximately $1,500 in Rwanda, $700 in Uganda and $400 in DRC. A significant share of the proceeds and park entry fees goes back to the villages. These revenues are being used to build schools, roads, cisterns and other infrastructure. Better roads mean local farmers can more easily get their products to market, and kids can more easily get to school. Community members are being hired to serve as porters and guides for gorilla tours.

A beneficial relationship has formed: When mountain gorillas prosper, so do communities. Most of the cattle have now been removed from the parks. Hunters have changed. Previously they “used snares to catch bush meat—small antelope and other game—butgorillas were sometimes caught,” says Seguya. “Many snares have been removed and consequently poaching has been reduced.”

Seguya says park rangers used to be the front line in protecting the gorillas, but now this duty is shared with the villages. “Because the residents are now working with us, rather than against us, information about prohibited activities is passed onto authorities.” Now the poachers, not the gorillas, threaten livelihoods.

Other challenges have arisen, though. Ecotourism itself is not without risk, because people can pass infectious diseases to mountain gorillas. As a result, visitors are asked to wear a surgical mask, keep at least 23 feet away from mountain gorillas, and limit visits to one hour. Anyone not wearing a mask must keep at least 32 feet away. Meanwhile, researchers also worry about the impact of climate change on mountain gorilla habitat, which, according to one recent study, is “likely to be in a worse situation than it is currently if appropriate mitigation and adaptation are not implemented.” Such measures would include ecosystem restoration, fire management, and water management for periods of both flood and drought.

Finally, human conflicts in and around gorilla habitat pose a threat to the animals, particularly in DRC, a country in the midst of an interminable civil war. “Poor people are drawn into insurgent militias for economic reasons,” says Seguya. “They just want a better life. But nobody wants to have the risk of a bullet hanging over their heads. Providing opportunities to otherwise desperate park-side communities, opportunities beyond criminality, insurgency, charcoal production and endangered species trafficking, is our goal in eastern Congo.”

It might be too much to hope that the prospect of aiding mountain gorillas can pacify rebel groups in DRC. But stranger things have happened. Mountain gorillas have magic. People from around the world go to Africa specifically to see the magnificent animals. The experience is one of the most profound of their lives. It certainly was for me.

Watching a mountain gorilla family, the first thing that strikes you is how “human” they are. The massive silverback reclines and allows his kids to jump on him. Mothers nurse their infants, stroking their heads and grooming their hair. Adolescent males wrestle, screeching, laughing and chasing each other. Over 98 percent of the DNA in human beings and gorillas is identical—in evolutionary terms, we are cousins.

I once watched a female mountain gorilla spend hours trying to teach her infant how to walk. She held the little ape’s arms and walked backward. I once witnessed an old silverback simply bare his impressive teeth to an intruder, a blackback apparently on the hunt for a mate, and the younger gorilla immediately turned tail.

The more time I spent with gorillas, the more I wondered about the meaning of being human. Although we greatly enjoy and repeatedly abuse our titular position at the top of the animal kingdom, human beings are often no more kind, caring or generous than gorillas. Mother gorillas coddle and protect their babies just like humans. Silverbacks are exceptionally peaceful beasts (although terrifying, sometimes fatal fights—always over females—are not unheard of). “The gorilla is one of the most maligned animals in the world,” Fossey wrote two generations ago, trying to dispel the King Kong myths. “After more than 2,000 hours of direct observation, I can account for less than five minutes of what might be called aggressive behavior.”

The heartening rise in mountain gorilla numbers may be the most important ecological success story of our time. It has been based on collaboration rather than competition, on communication rather than isolation, on selfless commitment rather than selfish greed. In other words, it is based on a rather encouraging change, or even evolution: Humans have been acting like gorillas.

Mark Jenkins is an explorer and journalist. His writing has appeared in National Geographic and Outside Magazine, among others.