The Veterinarian Brings His Healing Presence to Pets of the Unhoused

Kwane Stewart discovers the little-known world of generosity and love 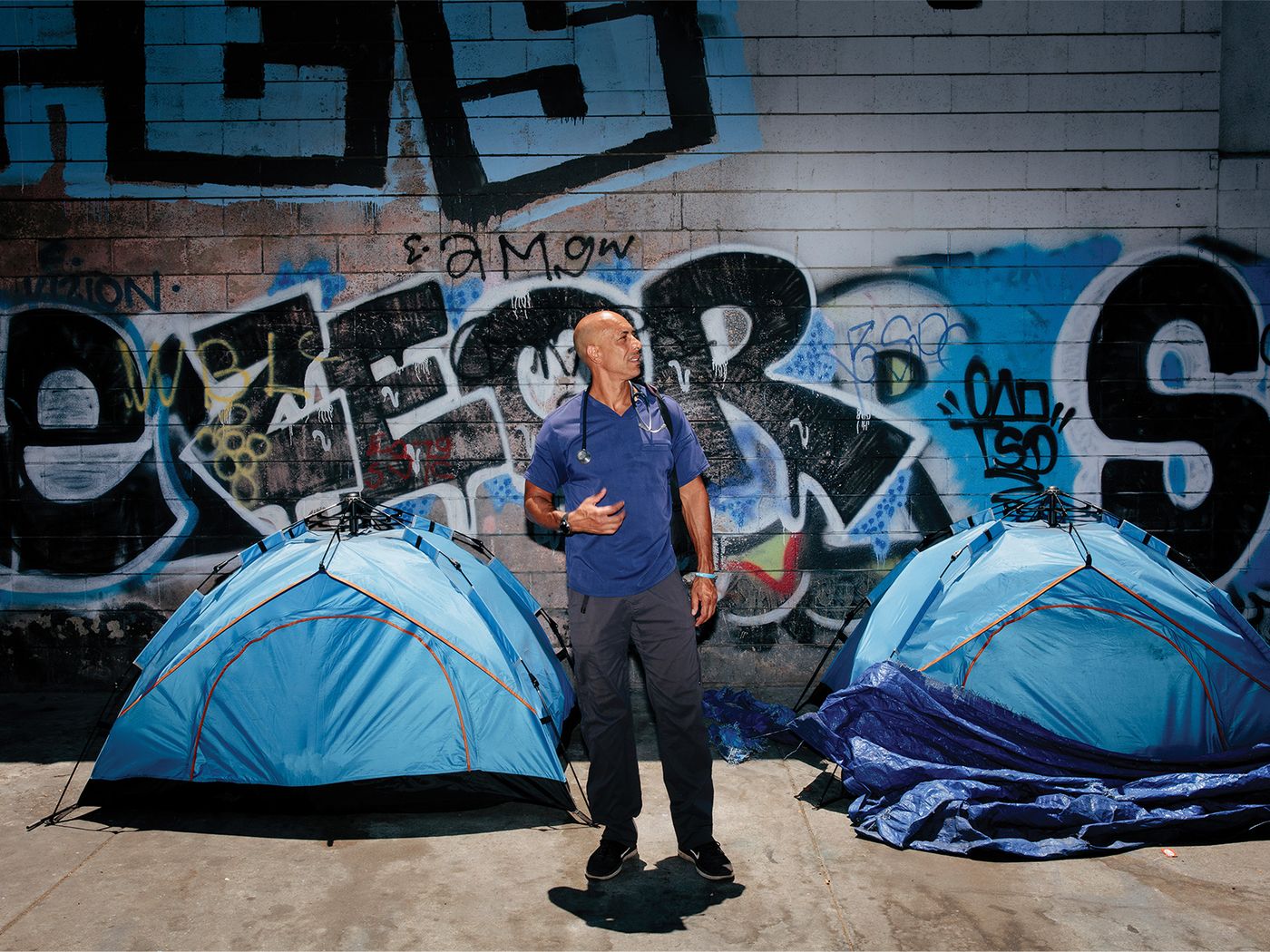 “You become a little bit of a fixture in the community,” says Stewart, seen here in San Diego. Kendrick Brinson

The man standing outside the tent on Skid Row in downtown Los Angeles clearly doesn’t live in the neighborhood. Tall and fit, he’s dressed in jeans and a doctor’s blue scrub shirt and carries a medical bag. The tent, one of many rough structures on the stained sidewalk, sits amid heaped wooden pallets, old furniture and trash. But the man’s eyes are fixed on the dog lounging nearby.

“Hi, how are you?” he says when the tent flap opens. “I’m a veterinarian, Dr. Kwane Stewart, and I offer free pet care to people experiencing homelessness.” He gestures at the dog. “Can I examine your pet?”

First comes confused silence—you’re who?—then suspicion: Is this animal control, here to take my dog? Finally, a slow nod. Stewart, who calls himself the Street Vet, kneels, pulls out his stethoscope and goes to work.

These Skid Row streets hold the nation’s largest concentration of homeless people who are not staying in a shelter, and at first glance it’s an unrelieved landscape of despair: mental illness, poverty, addiction. But love exists, too, including the love of pets. Across the nation, 10 to 25 percent of the people who are homeless keep pets, and there’s no reason to think the number is lower in sunny Los Angeles. Cats sit on sleeping bags, pit bulls, scruffy terriers and mutts trot alongside filled shopping carts, and chihuahuas ride in bicycle baskets and the laps of people who themselves are in wheelchairs. Various local groups and volunteers help the owners of these animals care for them, with weekly and monthly clinics, mobile spay and neuter vans, handouts of flea meds and food.

Stewart, 50, has usually worked solo, walking the streets and looking for animals and people in need. “Maybe it’s because when I began this work, it wasn’t uncommon to find a pet that had never received care,” he says. “Everyone I met looked at me as if I’d just dropped out of the sky.”

Stewart grew up with dogs, loved them and science, and by the time he was 10 knew he would become a veterinarian. It was an unusual ambition for a Black track star in Albuquerque. Once, a coach asked about his future plans and laughed with disbelief when Kwane told him. “I’ve never met a Black vet,” the coach said. Stewart goes on, “At the time I didn’t think much about it. But here’s the thing: He was Black himself.” Decades later the number of African American veterinarians is still so small the Bureau of Labor Statistics has reported that it might as well be zero.

Stewart graduated from the University of New Mexico, got his DVM degree from Colorado State University College of Veterinary Medicine and Biomedical Sciences, and headed to San Diego. He spent a decade there treating a suburban clientele with “bottomless bank accounts.” Then, in 2008, he relocated to Modesto, in California’s Central Valley, for a job as the veterinarian for Stanislaus County. And everything changed.

The Great Recession flattened Modesto, a city of around 200,000, with plummeting home prices and 17 percent unemployment. And when humans go broke, animals often pay the price. Pet surrenders surged until the area’s aging shelter, built for 200 animals, held twice as many, and its euthanasia rate became one of the nation’s highest.

“I was destroying 30 to 50 animals every morning,” Stewart says softly. “Healthy dogs and cats. It was killing my soul. I felt like God was keeping score and I was losing. I didn’t go to school all those years to destroy animals. I wanted to help and save them.”

At first that meant he helped a homeless man he encountered almost daily by treating the man’s dog, which suffered from a bad flea bite allergy. Then he held a free clinic at a local soup kitchen. And then, on his own time, he began to walk around Modesto and some Bay Area sites looking for pets to help. He moved to Los Angeles to serve as chief veterinary officer for the American Humane Association, which makes sure animals are treated well on film sets, and his ramblings shifted to San Diego and Los Angeles. He wore scrubs to identify himself, carried a bag filled with meds, vaccines and syringes, nail trimmers, and he did what he could, free of charge.

He was stunned by what he found. Like many people, he questioned why homeless people had animals to begin with—if humans couldn’t take care of themselves, how could they be responsible for pets? And yet they were. In fact, numerous academic studies over the years have revealed the vital role pets play in the lives of unhoused men and women—providing structure, purpose, meaning and love. “Researchers have consistently found very high levels of attachments to pets among the homeless,” Leslie Irvine, a sociologist, writes in her 2012 book about the phenomenon, My Dog Always Eats First.

Stewart agrees. “Pets were a lifeline to the people I met,” he says. “Most of them were great pet owners. They did remarkably well with the resources they had, and made sacrifices for them well beyond what you or I would. The bond between them was on a completely different level. They needed each other.”

For five years, his efforts were a kind of secret hobby that he says even his family—he has three children—didn’t know about. Then, in 2017, he and his brother, Ian, produced “The Street Vet” as a reality TV series­—it has aired on broadcast TV in Scandinavia and Eastern Europe and in the States on a Utah cable channel­—and Stewart acknowledges he’s now a “media personality.” These days he’s founding a new veterinary practice in San Diego and writing a book about his experiences on the street.

Last September he started a nonprofit, Project StreetVet, raising money on GoFundMe to cover the cost of treating pet medical problems beyond the scope of a sidewalk exam. He has occasionally volunteered with larger organizations assisting people who are homeless. Though he says “there are probably more efficient ways I could spend my time,” he likes doing it his way.

“The wound is healing well,” he reassures a man named Ben, whose pet rat had been attacked by a cat. (“I’ve seen birds and snakes, but this was my first rat.”)

“The puppies look great,” he tells Julian, a tattooed man who has lived on the same stretch of pavement for two years and whose dog recently gave birth. (He also vaccinates the pups.)

Stewart marvels at the generosity of a young man named Reggie, who lives in a school bus and uses his own cash to make lemonade that he gives away to his neighbors. Stewart vaccinates the man’s dog, Daisy. “You’re doing a good job,” Stewart says.

“Oh, this is such a blessing,” the young man replies.

Carol Mithers is a journalist and dog owner in Los Angeles who is working on a book about pets and poverty.