The natural world is filled with visual variety, and the reasons for an animal's appearance can differ even with a single genus. Leaf beetles of the genus Chrysochus, for instance, can be found across a broad geographic range, and they come in a shimmering rainbow of hues.

Found from Laos in the north to Australia in the south, a few Chrysochus species "are virtually the same beetle, and it is the locality largely that determines their color," says Oregon-based artist Chistopher Marley. Temperature, humidity, diet and adaptation to predators are all factors that can affect the shade of some beetles' exoskeletons. As larvae pupate, for instance, the chemical processes that control pigments happen at a faster or slower rate depending on temperature, resulting in different colors.

For Marley, this visual complexity can sometimes feel overwhelming. Messy even, he says. That's why he is driven to organize beetles, butterflies, sea urchins and other creatures into beautiful mosaics. He collects the materials for his art from far-flung places around the world or reclaims specimens from scientists and institutions. His latest book, Biophilia, published by Abrams, features exquisite photographs of more than 200 of his three-dimensional artworks.

Marley started with beetles. He gathered specimens of similarly sized species and tucked their legs underneath them, so that they were basically all the same shape, with oval, almost cigar-like bodies. This way he could focus on the brilliant spectrum of colors and textures in the insect group, arranging them like jewels in a pendant.

While his work is motivated by aesthetics, many of the artist's mosaics tell scientific stories, particularly those that include organisms that are genetically related but live in different parts of the world. The leaf beetles feature in a piece he calls Chrysomelid Arrayal No. 3 (above), which he painstakingly arranged according to color to highlight their striking visual relationships.

"My philosophy is to try and isolate one or two variables in a mosaic, so that the general populace is able to comprehend this amazing variety without it being a mess," says Marley. "As much as I can isolate the variables, it makes it more approachable and comprehensible, and a cleaner presentation." 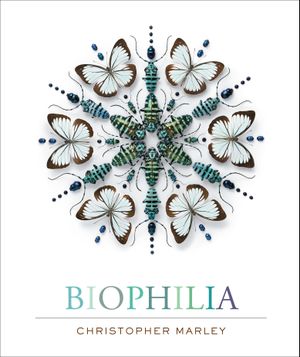 Beginning with insects and moving on to aquatic life, reptiles, birds, plants, and minerals, Christopher Marley has used his skills as a designer, conservator, taxidermist, and environmentally responsible collector to make images and mosaics that produce strong, positive emotional responses in viewers.