Across the South, some 500 modest structures still stand as monuments to an extraordinary partnership formed more than a century ago between Booker T. Washington, founder of the Tuskegee Institute, and philanthropist Julius Rosenwald, the chief executive of Sears. Under Jim Crow, most schools available to African Americans were inadequate and underfunded. But between 1912 and 1937, the Rosenwald Schools program helped black communities build 4,978 new schoolhouses. “They fundamentally changed the educational experience of African Americans,” says photographer Andrew Feiler, whose new book, A Better Life for Their Children, documents 105 of the remaining buildings. Most closed soon after the Supreme Court ruled segregated schools unconstitutional, in 1954, but by that time they had already helped to educate the civil rights generation—among hundreds of thousands of alumni were Medgar Evers, Maya Angelou and U.S. Representative John Lewis. 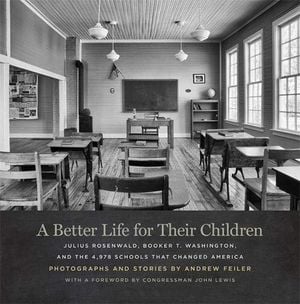 A Better Life for Their Children: Julius Rosenwald, Booker T. Washington, and the 4,978 Schools That Changed America

Andrew Feiler is a commercial and editorial photographer with a special passion for portraiture.