Glass. Refrigeration. Recorded sound. Water purification. Clocks. Artificial light. Modern life is made possible thanks to these monumental inventions and the many technologies they have spawned.

At least that is the argument that Steven Johnson makes in his new book, How We Got to Now, and a six-part PBS series premiering October 15.

The prolific author traces the unpredictable course of human invention, showing how one great idea inadvertently leads to a multitude of others. Murano glassmaker Angelo Barovier’s creation of clear glass in the beginning of the 14th century, for instance, led to the invention of spectacles, the microscope and the telescope, even the fiber-optic cables of the Internet.

Thomas Edison invented the phonograph to send audio letters, and Alexander Graham Bell intended for people to use the telephone to listen to live orchestra music. What does this say about innovation and unintended consequences?

It says that part of the process of innovation comes from the consumer side of the equation. You can invent the telephone and put it out in the world and say, "This would be fantastic for you playing cello on one end and someone else listening to you playing cello on the other end," but it gets out into the world and people start using it. They say, "That would be a terrible way of using the telephone. But it is really great for calling my grandmother." That is always the case with technology when it gets unleashed into the world. People end up pushing it in directions that the inventors never dreamed of.

You refer to the “adjacent possible.” What is this?

It is a term originally coined by Stuart Kauffman, a brilliant complexity theorist. Basically, when someone comes up with a new idea, technology or platform of some kind, it makes a whole other set of new ideas imaginable for the first time.

So, however smart you may be, there is no way to invent air conditioning in the 1650s. You just can’t do it. There are too many fundamental ideas about physics, industrial engineering and electricity that just aren’t understood yet. There is no way to have that breakthrough. But what happens over the course of history is that as someone understands one thing and if someone else understands another thing certain ideas, inventions or technologies become thinkable. They become part of what Kauffman calls the “adjacent possible.” 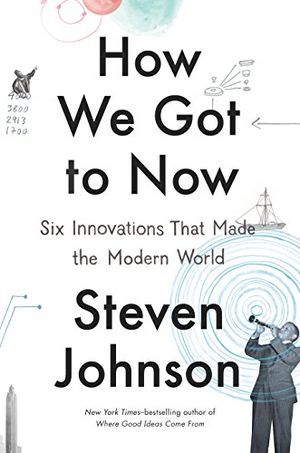 How We Got to Now: Six Innovations That Made the Modern World

In this illustrated volume, Steven Johnson explores the history of innovation over centuries, tracing facets of modern life (refrigeration, clocks, and eyeglass lenses, to name a few) from their creation by hobbyists, amateurs, and entrepreneurs to their unintended historical consequences.

You tell the history of the modern world through six innovations: glass, cold, sound, clean, time and light. How did you choose?

One of the goals of the book and the show is to celebrate a different kind of innovation then we normally do. There is a lot of talk about innovation in our society, but it is almost always focused on Silicon Valley and the new Apple Watch or some 25-year-old billionaire. The history of innovation is much bigger than that. It is people like John Leal, John Snow and Ellis Chesbrough, who helped create the fact that we can now drink water from a tap and not worry about dying of cholera 48 hours later. They didn’t become famous. They didn’t become rich. But, we are completely indebted to their work. I find myself being really drawn to those folks. They are the kind of heroes that we need to celebrate—as much as the Mark Zuckerbergs and the Steve Jobs.

Most people are familiar with the “butterfly effect” from chaos theory—the premise that a butterfly flapping its wings in California could trigger a hurricane on the East Coast. But, when it comes to innovation, you are a big believer in the “hummingbird effect.” What is this?

Some new idea is invented by either a person or a group of people trying to solve a specific kind of defined problem. In solving that problem, they have set ideas about what their invention is going to be good for, but what they can’t see is that there are going to be all these strange, unanticipated secondary effects that will ripple out from that innovation. The world gets transformed in all of these really surprising ways that would have been very hard to predict in advance. In almost all cases, the inventors had no idea they were going to unleash these effects.

We see this phenomenon again and again in history. I wanted to give it a name. I was writing the book at our house in California, and we have all these hummingbirds in our garden. Here you have this funny thing that happened in evolution where flowers and insects developed this complicated relationship of pollination. They have this long evolutionary dance together. But then this bird comes along and evolves this crazy strategy, which involves re-routing the muscle and skeletal structure of its wing so that it can behave like an insect and hover next to flowers and drink nectar. It is very similar in my mind. You would think, in evolution, this would just be the relationship between a flower and an insect, but it ends up transforming the wing structure of this bird. I started calling it the “hummingbird effect.”

Gutenberg's printing press is an example of an invention that had a number of unanticipated effects.

Once people started to read, and once books were in circulation, very quickly the population of Europe realized that they were farsighted. This is interestingly a problem that hadn’t occurred to people before because they didn’t have any opportunity to look at tiny letter forms on a page, or anything else that required being able to use your vision at that micro scale. All of a sudden there is a surge in demand for spectacles. Europe is awash in people who were tinkering with lenses, and because of their experimentation, they start to say, “Hey, wait. If we took these two lenses and put them together, we could make a telescope. And if we take these two lenses and put them together, we could make a microscope.” Almost immediately there is this extraordinary scientific revolution in terms of understanding and identifying the cell, and identifying the moons of Jupiter and all these different things that Galileo does. So the Gutenberg press ended up having this very strange effect on science that wasn’t about the content of the books being published.

The lightbulb has come to represent a “lone genius” theory of invention, when in fact Edison was just one of many in a network of thinkers that helped bring it into being. Why is this important for people to know?

If you believe that invention comes from single, solitary geniuses working on their own, trying to invent something that will make them fantastically rich, then you have a set of policies and prescriptions as a society that encourage that kind of invention. You have a really strong patent protection, so that when someone comes up with this brilliant idea, no one can steal it, and the inventor will be able to maximize the value that he or she gets from the invention.

But if you believe, as I do, that most important ideas come out of these collaborative networks, where one person comes up with one thing and the next person says, “I want to modify it a little bit and try this version of it,” then, in fact, patents can hurt as much as they can help. People are not free to share, remix and improve on other people’s ideas. It is not that patents are entirely a problem, but we live in this age where there is such incredible legal infrastructure around this. There are patent trolls, and there are firms that buy up thousands of patents randomly and hold them to see if they become valuable.

While it is the exception, not the rule, you acknowledge that there occasionally are “time travelers,” people who somehow make huge leaps in innovation. What is it about these people that make them capable of such thinking?

The French inventor Édouard-Léon Scott de Martinville invents recorded audio 20 years before Edison’s phonograph, but he forgets or fails to even think of the idea of playback. He invented this amazing technology for recording the sound of the human voice, but there was no way to listen to the recordings afterwards. It is this brilliant failure.

Particularly in the 19th century, it was unusual to be a full 20 years ahead of the competition. While he couldn’t conceive of this idea of actually listening to the audio, he was able to come up with the idea of recording the audio because he was influenced by a bunch of seemingly unrelated things. He was really interested in new anatomical drawings of the human ear. He was also a printer. He understood the idea of transcribing and coding. Then, he was really interested in stenography and how people could learn to take dictation at these incredible speeds. What inspired him to build this contraption was this idea that he could somehow record the sound of a spoken voice by translating the sound waves into these little scribbles on a page. Eventually people would learn how to read those scribbles just as they learned how to read alphabets. It was logical that maybe people would be able to read sound waves, but it turns out that people can’t. It’s not part of our neural tool kit to be able to do that.

I think he was able to conceive of recorded audio so far ahead of everybody else in part because he had all these different interests. It is that diversity of perspective. If he had just been looking at it from one perspective, he probably wouldn’t have been able to come up with it. But because he was interested in printing, stenography and the anatomy of the human ear, you put all those things together and it suddenly becomes possible to imagine a machine that could capture audio.

So if we aspire to be great innovators, we should take up a bunch of hobbies.

Yeah. Think about Darwin. Think about Ben Franklin. These are people that had a thousand hobbies. They would focus on their primary projects at various different points in their lives. Darwin had the theory of evolution, but he also had a beetle collection, and his beetle collection shaped his interest in evolution in all these subtle ways. Focus is overrated.

What is the biggest invention that we are on the cusp of now, and what pieces are coming together to make it part of today’s adjacent possible?

When they [IBM employees] trained [the supercomputer] Watson, they trained it by having it read the entirety of Wikipedia. The teacher for this new machine was basically all of us. Millions of people have collectively authored this global encyclopedia. We took all of that intelligence and set it into a computer, and the computer somehow became smart on a level that no computer had been smart before. There is something kind of lovely in that.