"Bitcoin" is one of the most confusing buzzwords in recent years. Thankfully, Paul Vigna and Michael Casey, two financial reporters at the Wall Street Journal, explain how the digital currency came to be, what it is and the potential it has to transform banking, finance and many ingrained systems within governments and beyond in their new book, The Age of Cryptocurrency.

The technological infrastructure behind bitcoin, though not quite as talked-about in pop culture as the currency itself, is what the authors find to be truly revolutionary. Simply put, the two argue, bitcoin provides people the opportunity to have a new relationship with money.

Smithsonian.com spoke with Vigna and Casey over the phone about this, as well as the tremendous ability for digital money to provide access to the approximately 2.5 billion people worldwide who are “unbanked,” meaning they do not have an account with a financial institution.

How would you describe bitcoin to a layperson?

Vigna: The easiest way to describe it is digital money. I know that brings up a whole host of subsequent questions, but after you absorb and figure it all out, that’s really all it is, digital money. This is money that is maintained by software, rather than being backed by a government, and that’s the biggest twist that people can’t get their heads around. How can you have money that’s not backed by a government? Bitcoin is a decentralized system, there’s no one computer that controls it.

Money is a system for valuing things and creating a medium of exchange between individuals. What bitcoin did was to revolutionize that system. Currently, that system is centralized through banks. Banks run our monetary system. Without banks, we wouldn’t have the money we have. Well, this is a system that allows us to send money to each other without those banks sitting in the middle of it all. Bitcoin is a digital, decentralized monetary system.

If a regular person wanted to start using bitcoin today, what does that look like, and how could they start doing that?

Casey: The wallet is the most important tool you have as a bitcoin holder. A lot of the wallets are also connected through an exchange or brokerage service, so what you do is you buy bitcoin through the wallet provider who then fills it with bitcoins. Most ordinary people will go to a service such as Circle or Coinbase. Coinbase will both buy bitcoin for you and provide you with a wallet to manage them. The other way to get it is to set it up through a company like Blockchain, which doesn’t provide any brokerage services. You have to buy your bitcoin elsewhere. 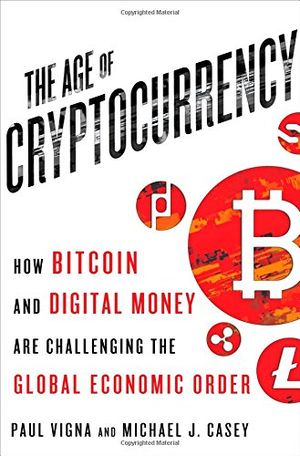 The Age of Cryptocurrency: How Bitcoin and Digital Money Are Challenging the Global Economic Order

Bitcoin became a buzzword overnight. A cyber-enigma with an enthusiastic following, it pops up in headlines and fuels endless media debate. You can apparently use it to buy anything from coffee to cars, yet few people seem to truly understand what it is. This raises the question: Why should anyone care about bitcoin?

Right now, why would someone want to use bitcoin instead of traditional money or in addition to traditional currency?

Vigna: It’s still not the easiest things to use. For a lot of people, it’s actually intimidating, and I think that is one reason why it’s very limiting. What it really comes down to is a preference. You want to do commerce this way; you want to do it between you and somebody else without any middleman. I think people start using it because they agree with it philosophically, or they are tech geeks, and they agree with the technology.

Casey: Our book is not a book that talks about how the average Joe should start using bitcoin. I personally think that’s a pipe dream, certainly in the short term. The idea that bitcoin is going to take over the dollar anytime soon is just not going to happen, not soon. I’m not of the belief that the average American consumer is going to be particularly drawn to this on a voluntary basis, because the incentives aren’t strong at that level.

What we stress in the book is that the technology, the capacity to transfer value through a decentralized system, goes much farther than whether mom and pop are going to buy their groceries with bitcoin. Whether it be a mom and pop or a multinational company, bitcoin is cheaper for the transactional cost. Credit cards charge between 2 and 3 percent for every transaction we make. It just happens to be charged toward the merchant, so we're all paying that with our credit cards as it is now, but we just don’t see it. It goes into our credit card fees and the prices of what we buy.

The use case for bitcoin that is most appealing is far bigger than that, it’s that companies, banks, governments even, will use the backbone of the technology, this decentralizing technology, and save billions, if not trillions of dollars, in the transfer of value around the global economy. That’s the key point we’re trying to drive home in this book.

Bitcoin has been a big distraction for the last two years because people are focused on how it’s a very volatile currency connected with criminals. They wonder why Silicon Valley keeps pouring money into this crazy thing that is never going to beat the dollar. Well, the fact is the underlying technology allows institutions to manage far bigger amounts of money on a lot lower cost base.

How do you see this currency and technology impacting the "unbanked?"

Casey: For immigrants and the poor, people who don’t have bank accounts, this is the backdoor way to gain access to the financial system. They don’t need to submit documentation, and the system allows the transfers of very small amounts of money without having to incur major costs. You have the capacity to integrate 2.5 billion people, currently unbanked, into the financial system with this technology.

Why do you think this is a revolutionary way to handle banking, finance and many other things moving forward?

Casey: You can actually go back centuries and think about how money has developed. Banks themselves were a technological advance. They solved a problem. The problem was: how do you send money or anything of value, over a distance, when two people don’t trust each other? It’s actually impossible, because you have to just trust that you’re not going to get robbed. So banks play the intermediary role of standing behind everything and standing behind everyone’s debts, debits and credits.

All of a sudden, we went from a system that was hand-to-hand cash transactions to one that could happen through the intermediation of debt and credit—over a much larger scale. Banks became these intermediaries, but the problem is they became all-powerful. They sat in the middle of everything; virtually every single transaction in the global economy goes through a bank. Banks charge a fee for that, and they become, as we learned in 2008, “too big to fail.” They become giant repositories of information and value, and we depend on them not to collapse—this is the power they wield.

What this [bitcoin] does is it resolves the problem of trust: you don’t have to have intermediaries such as a bank acting as the trusted party. Instead, you have a network of independent computers; they don’t belong to anybody but the participants themselves. Through a special algorithm—they all follow the same set of instructions—they’re incentivized to double check and audit all the information that people in the system are providing whenever they may a transaction.

If I’m going to send money through the bitcoin network to somebody on the other end of the world, the system will check that what I’m declaring I have is, in fact, what the entire system knows to be the case. The blockchain is an ongoing public ledger—a way to keep track of everybody’s balances—and it’s updated and maintained in a way where we can trust that it is being done fairly, rather than having to trust that some intermediary is fairly managing the information.

Vigna: This is all still very much an experiment, but this is the first time we’ve had what seems to be a viable alternative to the bank system. This is literally just a new way of doing what the banks have been doing. Bitcoin seems like it came out of nowhere, but people have been working on digital money and a digital ledger for twenty-some odd years.

You lay out a few different scenarios for what could happen to bitcoin. Where will bitcoin be in a year, or five years?

Bitcoin is not a corporation, it’s not a company. Bitcoin doesn’t have a profit and loss statement. Bitcoin doesn’t need 10 million people a month to adopt it. Bitcoin can exist on its own, as long as it has a core group of people using it and right now it actually does.

Casey: My personal view is that the back office is where this ends up. Last week, we had the big news that Coinbase, which is a wallet provider and broker, landed the largest amount of venture capital funding ever for a bitcoin company: $75 million. But more importantly, it had backing from the New York Stock Exchange; from BBDO, which is a very big Spanish bank; and from USAA, which is a large U.S bank. Having those three players along with some very powerful individuals behind it speaks to the idea that the financial establishment is thinking really hard about the ways that the blockchain could be used to resolve some of the inefficiencies that continue to make finance expensive and also risky and unstable.

There are a lot of interesting conversations going on in the cryptocurrency world. People from companies like Ripple, which is a form of cryptocurrency, have been talking to people at the Federal Reserve and big banks, for example, about ways in which the back office payment systems, the plumbing around which our whole market of payments and receipts works, is going to be built around these kinds of systems.

I think that’s where it’s going to go. Mom and pop aren’t going to notice; they’re going to keep using dollars and not realize that, behind it all, the financial system is moving to this decentralized model.