Andrew Parker, an English inventor, artist and zoologist at the University of Oxford, thinks color is not a thing. The world’s best colors, he says, come not from pigments or dyes, but from materials arranged into crystalline nanostructures that scatter light into “structural colors.” And when the $36 billion color industry—which is focused on dyes and pigments—takes notice, Parker think, we will have hues far richer and more dazzling than the comparatively drab tones that surround us today.

Structural color was first documented in the 17th century, in peacock feathers, but it is only since the invention of the electron microscope, in the 1930s, that we have known how it works. Structural color is completely different from pigment. Pigments are molecules that absorb light, except for the wavelengths corresponding to the visible color, which are scattered. In contrast, the intricate nanoscale architectures of structural color, some only a little larger than an individual atom, do not absorb light but reflect it into particular wavelengths. The results are vivid, often shimmery.

Parker has been working for over two decades on a method to replicate these nanostructures in a lab, to produce the most brilliant of nature’s colors artificially. “The brightest colors,” says Parker, “are being produced from completely transparent materials.” He was determined to replicate this phenomenon. Many pigments are toxic, and some are mined from the earth. Plus, creating products based on principles that have evolved in nature “helps people learn a bit more about the natural world,” he says.

In nature, structural colors are as abundant as pigments, if not more, Mathias Kolle, a mechanical engineer at MIT, tells me. Optical structures in peacock feathers called photonic crystals cause iridescent color. These feathers are actually pigmented brown—they owe their stunning hues to nanostructure. The shiny, metallic colors of many insects are created by multiple layers of transparent materials organized into complex, reflective patterns. Even the blues and greens of the human iris are structural. The interesting question, Kolle tells me, is whether we can recreate these forms: “Can you make the material structures that nature has grown over millions of years of evolution?”

In the early 1990s, Parker was an art student at the University of Sydney—but spent his time behind a dive mask, admiring resplendent marine life. Come twilight, he would see how the animals colored by pigments would fade, while the iridescent hairs of a lobster, say, were still visible. He wondered how they were doing it.

Underwater, Parker came face to face with the importance of vision in nature. Take the weedy sea dragon, a sea horse-like fish that waves its body like seaweed. The entire animal is devoted to sight, Parker tells me—its morphology and behavior are dedicated to camouflage and disguise, to leaving an image of itself in the lenses of other animals. He started to realize this was the case with more and more animals he looked at. Vision, he was coming to see, was at the heart of life—“the most dominant sense on the Earth,” says Parker.

Parker put his art on hold to focus on the science of sight. Following a PhD in zoology, he worked in museums, including at the Smithsonian’s National Museum of Natural History in the mid-1990s, where he studied fossils from the Cambrian explosion—the event when animals first evolved from single-celled organisms into diverse and complex life forms. In the Smithsonian’s paleobiology collections, he encountered a fossil of Wiwaxia, a bizarre, spiny ancestor of the mollusk, which dragged itself along the ocean floor 520 million years ago with its single foot.

Through an electron microscope, Parker saw that Wiwaxia had a diffraction grating on its body, meaning a nanostructure composed of a series of parallel grooves that split wavelengths of light into colored rays, like the bottom of a CD. Wiwaxia, Parker realized, would have glimmered as it crept across the murky bottom.

Why did Wiwaxia evolve to reflect structural color? “The answer,” Parker says, “is the same as today. Because eyes exist.” Wiwaxia’s iridescence was likely a warning signal to predators. This discovery sent Parker in search for the first eye in the fossil record—in a trilobite, around 520 million years ago—and, in 1998, Parker announced his “Light Switch Hypothesis.” He argued that the evolution of vision had sparked the Cambrian explosion. The eye, Parker thought, had caused an arms race, propelling the evolution of hard body parts, like shells and bones.

The notion of a let-there-be-light moment in the story of life was not widely accepted by paleontologists. Parker pivoted. He began inventing new technologies that mimic the natural mechanisms that fascinated him. In his biomimetics lab at Oxford, he designed a way to make solar panels 10 percent more efficient by mimicking the reflector of a 45-million-year-old fly preserved in amber. He discovered the mechanism used by beetles in the Namib desert to extract water from fog, then applied the technology to remove condensation in air conditioning systems.

It was color, though, that still really fascinated Parker. He started rearing vivid butterflies and beetles, examining them under electron microscopes. Parker and his team discovered an opal structure—a complex, crystalline architecture—in an Australian weevil. Each beetle, it seemed, was producing a gemstone-like material on its body. This, Parker thought, could offer a new way of synthesizing opals.

Structural colors have many advantages over pigments. The nanoscale technology can be easily controlled—the nanostructures can be tweaked to adjust brightness, hue and the angles of reflection. Structural colors are a safer and more sustainable alternative to many pigments that are mined from the earth, some of which, like cadmium reds and yellows, are toxic.

While pigments often fade, structural colors do not: As long as the nanostructure remains intact, the same structural color will shine on indefinitely. They also tend to be lighter than pigments. A jet covered with paint containing flakes of structural color, says Parker, would weigh up to one ton less, increasing fuel efficiency.

Though it is possible to fabricate structural colors in laboratories, scaling up production has long been a challenge. It has also been difficult to design structural colors that look the same from all angles. Recently, though, Parker’s company, Lifescaped—founded in 2015 with the support of Britain’s then-Prince Charles—has been making impressive advances.

First, Parker tried growing the cells of a morpho butterfly, whose wings are composed of Christmas-tree-shaped nanostructures that reflect wavelengths corresponding to a rich blue. It worked, but only once—the cells could not produce the color repeatedly. Then, he tried copying natural photonic architectures in the lab, but he found this was not scalable. It can take a week for a machine to sculpt a nanostructure the size of a pinhead out of silicon.

Parker has now found a way to make sheets of what he calls “Pure Structural Color” in large quantities. Deep, resonant oranges that maintain their intensity at all angles and will never fade in the sun, blues (from violet to cyan) of impossible brightness, and purples like thick velvet have rolled out of a factory in a market town in the English Midlands. Parker calls them the brightest colors in the world, and he is guarded about the specifics, other than to say that the precise mechanism is not found in nature. “It’s reflecting 100 percent of the light,” says Parker. “It can’t get any brighter.”

According to the patent, Pure Structural Color is made of several extremely thin sheets of nonconductive material. These layers are stacked together and imprinted, or stamped, with a nanoscale pattern of rods with curved ends. This pattern scatters light into colors that are visible from all directions, and different hues can be produced by changing the dimensions of the pattern. The sheets can then be used to cover objects, as was the case in 2021 when Nike stuck sheets of Parker’s Pure Structural Color onto the surface of a prototype pair of blue and green Air Jordans.

Other researchers have had breakthroughs in structural color, too. At the University of Cambridge, a team led by Silvia Vignolini, a chemist and expert on biomaterials, has developed a potentially scalable way to make structural color using nanocrystals made of cellulose. Last summer, Benjamin Miller, Kolle’s PhD student, discovered a way to produce, in large volumes, malleable materials that change color as they are stretched. These could be applied to the design of touch-sensitive robots, and to make bandages that switch color as they are tightened.

The biggest obstacle to structural color is cost, but Parker believes this problem has been cracked. “We’ve solved it,” he says, but refuses to elaborate on the specifics. “That’s the bit that gives it away.”

Next, Parker hopes to harness the way moths shimmer gold and silver to make nonmetallic paints, and to learn from the flamboyant cuttlefish how to make objects change color like chameleons. Parker sees a future in which structural color replaces pigments at large scale, a vision that is shared by Kolle.

“I think it could,” says Kolle. “Otherwise I wouldn’t work in this field, right?” 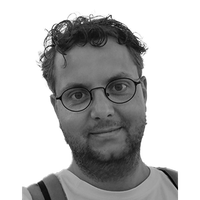 Tomas Weber is a freelance journalist based in London.