Have an older child who still loves playing with cars? Maybe it’s time for an upgrade to a toy moon rover. Or your daughter really digs magnetic puzzles—she might like to try her hand at solving tougher logic problems.

Honestly, maybe you just want an excuse to play with a funny little robot.

But if you’re feeling overwhelmed by the sheer number of science- or tech-themed toys out there, fear not. A team of testers and engineering educators at Purdue University has done some of the heavy lifting for you.

At Purdue University’s INSPIRE Research Institute for Pre-College Engineering, Monica Cardella and Elizabeth Gajdzik plucked 10 stand-out gifts from a suite of more than 130 toys either submitted by toymakers and publishers for evaluation or requested by the researchers. After rigorous testing by dozens of kids, parents, college students and engineers, the group compiles an annual Engineering Gift Guide.

When they’re not testing toys for the guide, the institute’s researchers study how children learn about engineering concepts inside and outside of school, with the goal of helping kids of all interest increase their interest in engineering-related disciplines.

The institute’s researchers judge books, games, apps and toys not only on their fun factor, but also on how the products help develop “engineering thinking.” With the U.S. Bureau of Labor Statistics predicting a sharp increase in jobs in science, technology, engineering and math (STEM) disciplines, there is a critical need to get the next generation of students and workers ready to step into those roles. Intangibles like creativity, perseverance, learning from failure, and evaluating the effectiveness of a solution are necessary skills for those jobs, not to mention valuable for life outside of them. Even very young children benefit.

“There are toys for kids as young as one and a half that let them put pieces down and see a different reaction or result,” adds Gajdzik. “Little kids do realize those things happen, and make different choices the next time they play. That’s an example of computational thinking that helps them become better problem solvers.”

John Mendoza-Garcia, a recent Purdue doctoral graduate, was able to test out a variety of the lab’s toys at home with his wife and 5-year-old daughter. Even though he’s an engineering educator himself, he says the testing gave his family a deeper appreciation of the power of toys to shape valuable life skills.

“Engineering and science are disciplines that try to make people’s lives better,” Mendoza-Garcia says. “Toys like this help to shape that understanding. Plus, as someone who learns about how people learn, it was amazing how different that experience is when you play along with your kids.” From the 77 pieces in this set, budding engineers can hoist up their Lego figurines in a homemade drawbridge, zip line or bucket escalator. Guided at first by an illustrated manual and some adult help, kids can go on to put together simple machines of their own design after getting comfortable with the mechanics of a pulley system. “Engineers have to get creative in their projects along with the math and applied science they use,” Gadjzik says, and adds that this toy is on the top of her own 4-year-old son’s wish list. (Brackitz, $39.99) Gajdzik and Cardella say the fact that Purdue claims 24 astronauts as alumni had no bearing on their recommendation of this toy, whose rotating planets may very well inspire cosmic curiosity in some of the kids who play with the crank-and-gear toy this holiday season. The endless variations for stacking and interlacing the chunky cogs encourages repeat play, all while building problem solving and design skills as you talk to your kids about the solar system and outer space. (Learning Resources, $39.99) Though “preschooler” and “logic” may seem like odd bedfellows, Gajdzik and Cardella say Smart Games’ Snow White Deluxe puzzle game strikes the right balance between imaginative play and problem solving. With prompts from an illustrated story book and an instruction booklet with 48 challenges, kids employ logical reasoning and critical thinking to arrange the Seven Dwarves correctly to keep the Wicked Witch away from Snow White. And when they tire of the game, kids enjoy just playing with the set’s sturdy figurines. (Smart Games, $26.99) Magnetic toys are another perennially popular category with the Purdue lab’s young testers. Easy to put together, take apart, and re-arrange into new configurations, magnetic toys readily foster creative design and intuitive play. GeoSmart’s Moon Lander adds a dash of robotics to the mix with a motor and remote control, giving kids the ability to put their vehicles through their paces. But they’ll need to think critically about how the various components work together and where to make connections to have the motor drive the rover. The “Mars Explorer” is a similar option, though at a slightly higher price point. (GeoSmart, $59.99) In a crowded field of toys, games and apps intended to help kids learn the principles of computer coding, Gadjzik and Cardella say that Osmo’s new offering has drawn young testers in like the Pied Piper. By snapping together “coding” blocks that the game’s app reads and then translates into animated musical compositions, kid-users make music through programming. Though families do need an iPad or iPhone to run the app and play kids’ pop hit creations, this open-ended digital toy encourages creative thinking, spatial reasoning, critical evaluation and computational logic. “Kids may not know they’re interested in engineering until they know their interests can relate to engineering,” Cardella says. (Osmo, $59.99. Does not include base) What kid doesn’t dream of building their own playground? Along with blanket forts and castle doodles, kids can use this kit to construct fantasy-land playgrounds, either from their own imagination or with help from one of the 20 challenge cards included with the 104-piece set. The included parent guide offers open-ended questions to get kids thinking about prototyping and refining their initial designs. The company offers several similar sets, but Gadjzik and Cardella say they liked this one best because slides, merry-go-rounds, swings, zip lines, bridges and see-saws appeal to kids everywhere. (Learning Resources, $24.99) What if your Legos could make a fan spin, or play a little tune? That’s the idea behind the 120 circuit-building projects kids can build with the bricks in this electronics learning toy—and they’re compatible with the aforementioned Danish bricks (and others.) Builders can also design their own circuits, creating linkages to light up blocks, or turn on a noisemaker to annoy their older sibling. Similar to Snap Circuits, Gadjzik says they appeal to kids because they’re a bit more intuitive to use, and can be used with other toys likely to already be in the household. (E-Blox, $44.99) The blocky, pixelated dog on this puzzle-game’s packaging will draw in Minecraft enthusiasts, but the magnetic board game is completely unplugged. Players work to correctly arrange nine tokens on a grid by following an incomplete series of clues, and fill in the gaps, Sherlock-style, based on what they know must be true or false. Don’t be fooled by the game’s low price point: by following clues to the logical solution of each puzzle, kids develop valuable reasoning skills that are central to success in math, science and engineering. (ThinkFun, $9.99) 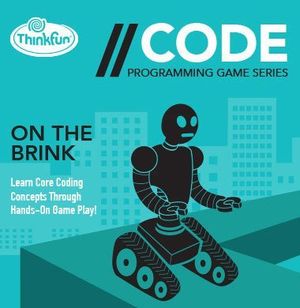 Developed with the help of NASA programmer Mark Engleberg, these board games teach computer coding techniques—without requiring hours in front of a screen. Players angle to “program” a path for the game’s robot to get it from start to finish, and each game includes 40 puzzles of increasing complexity. Beginning with the set’s entry-level game, On the Brink, players gain ever-more advanced programming skills by building on concepts and skills acquired by solving easier puzzles. “I’ve had undergraduates flip to the back of the puzzle book, thinking the starting puzzles would be too easy for them, but the entry points get you in the right mindset to solve the harder problems,” Gadjzik says. Rover Control and Robot Repair are the second and third games in the series, respectively. (ThinkFun, $14.99) “Everyone from three-year-olds to university level students get excited about Cozmo,” says Gadjzik. While there are many coding toys and games that aim to get kids to move a robot from point A to point B, half of the fun of doing that job with Cozmo is the little robot’s attitude. A little bulldozer with shifty, expressive eyes, the bot reacts with glee or indignance as he wins or loses games, rolls past the resident cat or dog, or works with you to solve the daily challenges it puts forward. Gadjzik and Cardella say that hands down, Cozmo wins for fun—while also effectively teaching coding principles and problem solving. The downside is the somewhat hefty pricetag: this might be your big gift of the season. (Anki, $179.99)