The Quest to Shoot an Arrow Farther Than Anyone Has Before

In dogged pursuit of an exotic world record, an engineer heads to the desert with archery equipment you can’t get at a sporting goods store 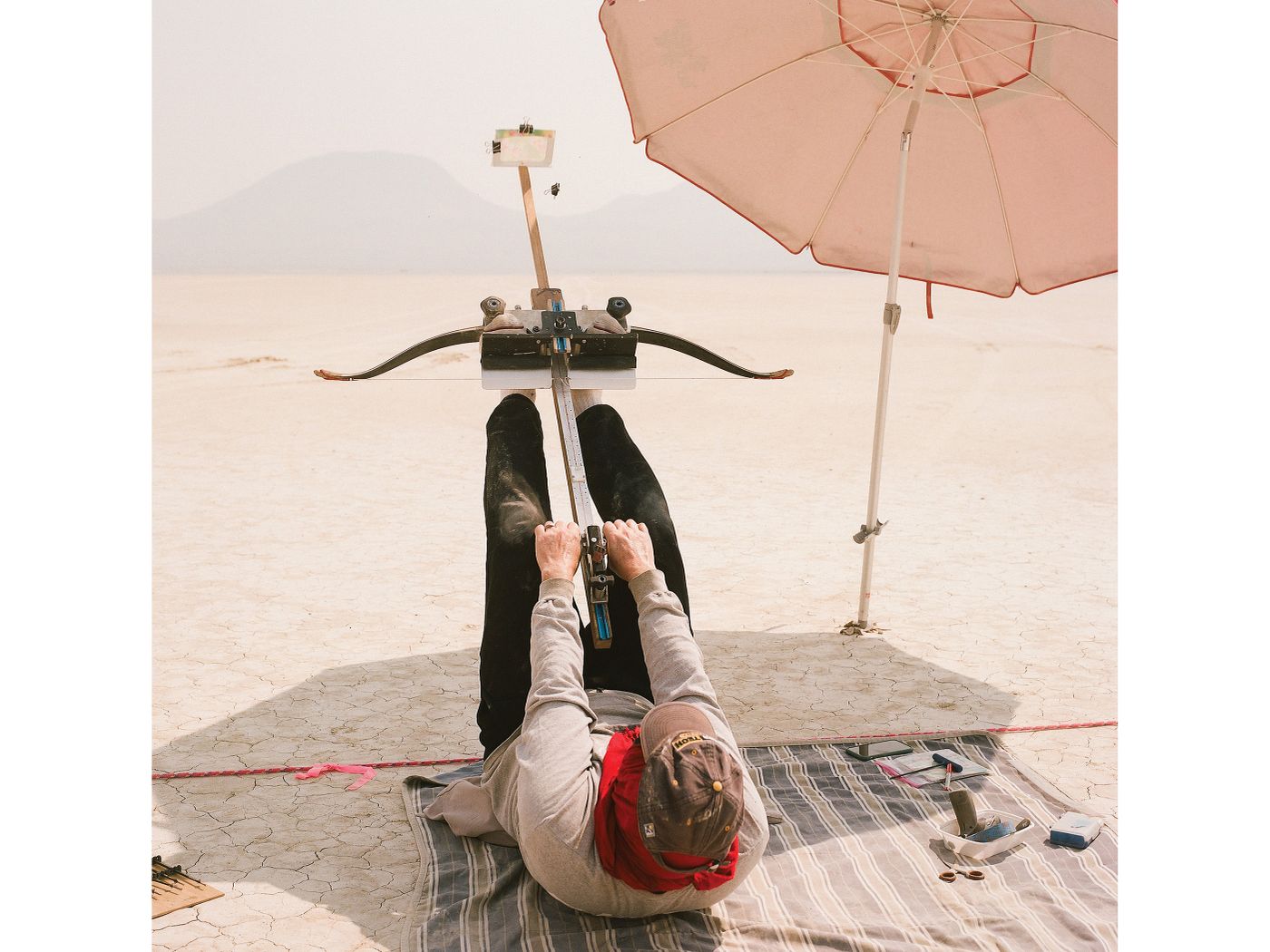 Poised on a Nevada salt flat, Alan Case, one of the world’s top practitioners of flight shooting, aims his custom-built bow, which requires so much strength to draw he must use his legs.

In an ancient white salt flat, 30 miles south of Nevada’s Route 50—“The Loneliest Road in America”—a man is looking up into a blue sky. His head is wrapped in a makeshift keffiyeh scarf to protect him from the sun. In a few moments he will lie down on his back. Between his upraised legs he will cradle a contraption akin to a medieval crossbow, and point it at an angle of roughly 40 degrees in the direction of a hazy mountaintop some four miles away. He is preparing to shoot arrows out into the thin desert air, one of which he hopes will break archery’s worldwide distance record of 2,028 yards, or 268 yards beyond the one-mile mark.

“This is about to get interesting,” he says with a nervous laugh. Alan Case, a bemused engineer and designer from Beaverton, Oregon, has spent the past 15 years chasing that distance record, which was set in 1971 by an archer named Harry Drake. The champion used a muscle-powered device called a footbow, similar to the one Case is warming up with this morning 6,100 feet above sea level at Smith Creek Dry Lake. It is nearly 50 years to the day that Drake set the record. At 55 years old, Case is Drake’s age at the time. “After about four or five practice shots I start to have fun,” Case says.

Despite the heat, one might assume that archery fans would be thronging to the desert to witness such a milestone. Yet there are no crowds. Footbow archery, or “flight shooting” or “flight archery,” has no following. Once popular, distance shooting in America waned when it was believed that an arrow had been shot as far as it could go. A handful of archers around the world, though, imagined there might still be records to set. But where do you find a space wide and empty enough to practice and compete? Beaches are windy and often full of people. Arrows get lost in flora-filled parks—also full of people. In the United Kingdom, they’ve tried competing on airfields.

There’s another reason for the lack of popularity: the equipment. You can’t just buy a footbow at a sporting goods store. Building your own and tuning it precisely is onerous. “This guy is unbelievably committed to getting this done,” says James Martin, standing alongside a worktable Case has set up next to his minivan on the flats. “It’s astonishing. He works year-round every evening computer-modeling ways to get more energy into the arrow.”

Inside Case’s van are tools, spare parts, a sleeping bag, food wrappers and his family dog, Buddy. Roughly 15 friends and family members have caravanned here to erect a pop-up tent amid the alkaline hummocks and spiny shrubs. They are also putting in place an electronic distance-measuring device of the type highway surveyors use. It will compute the winning shot to within one centimeter from the firing line over a mile away.

The gregarious Martin, a physicist at Sandia National Laboratories in New Mexico, is also a distance shooter, and holds records using specialized hard-to-draw bows made for him by Case. Like many archers, he has a bone-crushing handshake. He is something of a Boswell to the reserved Case whom he has known for several years.

To shoot an arrow the length of more than 20 football fields defies traditional notions of archery, says Martin, beginning a staccato tutorial. “What is a bow? There’s the longbow like the English used to shoot, a D-shaped design, very simple thing. Those shoot the least far. Then there are recurve bows with curved tips that create more energy than the longbow. Those shoot farther so that’s another category. Last are compound bows. Those have confusing-looking pulleys and multiple cables.”

He continues. “Bows are classified by how hard they are to draw back. So if it takes 35 pounds of force to pull it back, that’s a 35 draw-weight bow—or 35 weight class. Then there’s a 50-pound class and a 70-pound class—70 pounds of draw weight would be a very heavy hunting bow. People hunt grizzly bears with them. Last is the unlimited class where anything goes. The most extreme stuff. That’s what we do and why we’re here today.”

Case’s footbow is not only the hardest to shoot, but also the most unpredictable and dangerous. It requires an archer to place his feet in stirrups and push outward with his legs while straining to pull back on the bowstring with his hands, creating a draw weight of up to 325 pounds. That’s a tremendous amount of brute force to launch an arrow that weighs little more than a couple of pencils at up to 800 feet per second, roughly the same speed as a .45-caliber bullet.

If a bow limb breaks—he has broken more than 40 of them—the entire apparatus seeks the quickest way to dissipate its tremendous energy. Archers call it “blowing up.”

“I’ve had some mishaps with the bow,” says Case. Actually, he clarifies, “a whole lot of mishaps. It plays in the mind a bit.”

Footbow “arrows” are perhaps the most fickle variables in a long shot, and they compound the sport’s danger. Case produces a metal coffer he calls his “jewel box.” Inside are perhaps 20 arrows of various lengths—as short as 8 inches, not longer than 13 inches—some for practice, some for competition. They appear quite different from the Paiute Indian arrows that Pony Express riders once dodged along the nearby mail trail in the 1860s. These resemble slender knitting needles.

To build one, Case starts out with an ultralight carbon fiber rod and carefully fashions it into a streamlined shape, often using model rocketry software as a guide. He then applies a stainless steel tip and a nock, the grooved end that fits on the bowstring. A serial number is etched on each shaft. Instead of feathers, the traditional fletching at the rear end of an arrow, Case uses fragments from a safety razor blade. “The blades are hard to find,” he says. Longer arrows are more forgiving than shorter, but neither is dependably stable, and if one goes awry on launch it can come back at the archer with a vengeance.

This morning, Case has been shooting practice arrows, pulling the bowstring back little by little, limbering up for the big shot that will occur in the cooler evening. He is confident, partly because he’s certain he has already beaten the record, just not to the satisfaction of the official USA Archery rules book.

The competition today is a solo affair—Case versus history, with no other competitor or official on hand to witness the feat, which is supposed to be documented and attested to by Case and his retinue. The only person who can psyche him out before the official shot is himself. I ask Case if he ever gets the yips—a subtle but disabling mental attack that afflicts golfers when they putt. “If I think about it too much I get nervous,” he says. “It’s weird. [Archers] sometimes develop something called target panic. It starts when they maybe think too much about hitting the target, and the pressure. It builds up and it gets so bad sometimes they just start to pull and they let go. It takes years sometimes to get over it. I try to think differently. If I just tell myself it’s my job, I’ll do okay.”

Case decides to take another practice shot, increasing the pull weight. Soon some members of the caravan will drive out and begin looking for his arrows. Finding an eight-inch black carbon rod against the white flats and a backdrop of shimmering mirages is nearly impossible for the untrained eye. “You have to know how to look for an arrow,” says Martin. “It hasn’t gone anywhere. It’s out there.”

In the merciless heat, Case lies down on his shooting blanket. The wind cups of his portable weather station are nearly still, although dust devils are visible in the distant west. The onlookers, their legs and shoes covered in white dust, stop what they are doing and fall silent. He pushes outward on the bow with his feet, struggling to aim, strains to pull back on the bowstring, then releases.

It is perhaps best that the archer’s next utterance be forever lost on the desert wind, but it consists of equal parts pain, surprise and intense anger. In a split second his arrow has bored itself deep into the top of his right foot and shattered a bone. He reaches down and pulls out the carbon rod, and with it comes a rush of blood. Alan Case’s quest for the official title is ended, for now.

Bulls buck cowboys. Mountaineers miss handholds. Surfers wipe out. The next morning I visit Case in his small room at the Cozy Mountain Motel in nearby—by Nevada standards—Austin (pop. 113). Doctors 111 miles away in Fallon had patched him up. His new crutches lean in the corner and his foot is elevated. He is surprisingly good-natured.

“I don’t know what happened,” he says. “It’s crazy. I was starting to feel good. Just keeping it on the target.” Ever the scientist, he calculates that the entire incident probably lasted no more than 0.005 of a second. “It doesn’t take much to deflect an arrow, but it takes a lot to stop one head-on.”

He vows to be back. I remind him of a historical fact he already knows well: The last great culture to prize long-distance archers were the Turks in the beginning of the 15th century. Some of the best were said to achieve shots up to 900 yards. The most revered champions earned mezils, elaborate stone monuments memorializing their winning shots.

There’s little doubt Case will earn his mezil, even if it’s only a line in a record book; the caravanners found one of his practice arrows at over a mile. Next season the humidity will again be low in the desert, the winds still and the salt flats porous enough to plant arrows. For now, Harry Drake’s record stands. It hasn’t gone anywhere. It’s out there.

*Editor's Note, 11/22/2021: A caption in an earlier version of this story misidentified Alan Case’s wife. She is Adrienne Lorimor-Case.

Erin Trieb is a conflict photographer whose work has appeared in Harper’s and the New Republic, among other places.

Patrick Cooke is a writer and editor in Washington, D.C. His last bylined article for the magazine was about horology.