Playing for the Arizona State University rugby team in a 2011 game, Anthony Gonzales “took someone’s hipbone to the back of my head,” he later recalled. When he got up he tried to keep playing—for the wrong team. After friends led him off the field, he was diagnosed with a bad concussion. Gonzales was lucky his friends recognized he needed help: Continuing to play after a serious head injury risks permanent brain damage, and yet student athletes report as few as 50 percent of their potential concussions to coaches.

Prompted by his own injuries, Gonzales, an MBA student at ASU, has developed FITGuard, along with fellow ASU grad Bob Merriman. The mouth guard is equipped with sensors that measure the force of a hit to the head and calculate the likelihood of a concussion based on age, gender and medical history. If a concussion is suspected, LED flashers in the front light up. At the same time, a smartphone or tablet app connected to the device uploads data describing the force of the hit, then activates a set of protocols, including tests to track symptoms like photosensitivity and memory loss, to guide coaches and parents through the crucial first minutes.

Gonzales intends to release the mouthguard in early 2016. The goal, he says, is “not to replace the physician,” but to help “identify when you need to see the physician”—and, hopefully, help keep more injured athletes from returning to the field. 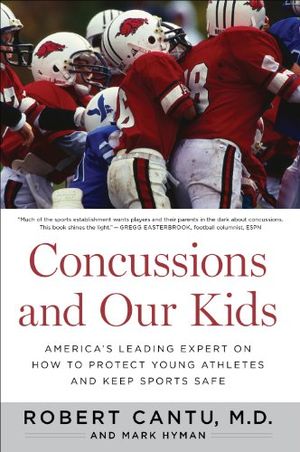 Concussions and Our Kids: America's Leading Expert on How to Protect Young Athletes and Keep Sports Safe

"Concussions and Our Kids" is the first prescriptive book of its kind to address the issue of head trauma in sports and provide preventive solutions to protect athletes and give guidelines for the way sports can be played safely. Dr. Cantu and sports journalist Mark Hyman have crafted a book that is part manifesto, part manual.