searched the shelves for herself as the center,
As the star she knew she was,
As the narrator of a brown girl narrative, a story
she already knew—herself on the page and found
Nothing.

One child in the world for only ten years ALREADY KNEW

Of Tubman, of Chisholm, of Sojourner Truth,
of Angela Davis and Black Girl Magic—this power
running through the blood of her youth.
Still, where was she? How was the world of fiction and history moving
without her in it? Already knew
her country’s, her classroom’s, her world out there’s
audacity. Her journey now beginning.
So many before her making ways out of No Way. Change choosing them to show her
how much SHE MATTERED, how much
a black girl on the page, mattered, fingers moving over
book after book where she didn’t exist—mattered. Her black life

Ruby Bridges at 6—eyes straight ahead toward her parents’ dream
for her, a world that was not separate, but equal. Her fear
like the satchel clutched in her small hand, MOVING FORWARD
through the doorway of a New Orleans schoolhouse
into history.
Through the frustration of fingers searching shelves, came
for Marley, a revelation, an activation
Absence to Anger.
Anger to Hope.
Hope to Action.
Action to Change.

Marley Dias seeing black girls in the absence of black girls, her own
wake-up call, so many books where white boys and dogs crowded classroom libraries
as brown hands reached
for reflections of brown bodies, grasped air. She knew
the books were out there. STARTED A MOVEMENT
to get the stories where they belonged, into the hands
of the young people, who were hungry
for classroom libraries where they, too, existed.
This absence, to Marley, meant
Movement
#1000BlackGirlBooks was born, a hashtag and soon
a revolution—The goal, to collect one thousand books where Black Girls
told THEIR STORIES, she knew the stories were out there
publishers, writers, family friends and strangers got wind of Marley’s story
One to One Hundred, 1000 to Ten Thousand—until,
Thousands of books were going out again—
Five thousand books donated into the hands of many
children across the nation and out into the world
from Newark to the Navajo Nation,
from Flint, Michigan, to Jamaica West Indies, one child on a journey
to erase the erasure, to rewrite an almost-history
of invisibility
But why stop there? Her work not done yet, she began
to host book parties where young people donated, exchanged, discussed
the books they’ve come to love where Black Girls featured FRONT AND CENTER
So many hundreds of girls seeing so many thousands of girls on the page
Finally.

Marley wanted more. Formed #BlackGirlBookClub where black girls
get together to read books that, as Dr. Rudine Sims Bishop, who once herself
was a black girl and went on to change the face of Black Children’s literature,
so beautifully put it, provided windows and mirrors
into their stories of black girlhood and womanhood—the world
growing bigger and stronger and more loving with the turn of every page.

And still and still

With the help of her mother’s Grassroots organization
The books were logged, a list created of 1,000 Black Girl Books
Online now for anyone who wants, needs our stories,
Thousands more books housed in the Grassroots library
near her home in West Orange, New Jersey—until they go out
into hungry classroom libraries, end up in the wanting hands of young people who
for too long have had to read books where they didn’t exist. Tomorrow
they will see themselves—for too many, this will be
the first time.
To date, 10,000 books have been collected
because ONE CHILD was asked the question
So what are you going to do about it?
And did what she had to do.
Then signed a book contract at 12
Marley Gets It Done (And So Can You!), it’s true
One child’s commitment to social justice and change
has changed a nation.
Marley Dias, 21st-Century Hero who knows
what the ancestors knew
that through
frustration comes determination and innovation, who says
I want to use what I’ve learned to elevate the voices
of all those who have been ignored and left out.
Young person turned activist turned friend—I am proud to know
that I get to walk this road
with Marley who, named for Bob Marley, walks with so many who came before her
and knows
her change is part of a continuum—

Yet all HER OWN. 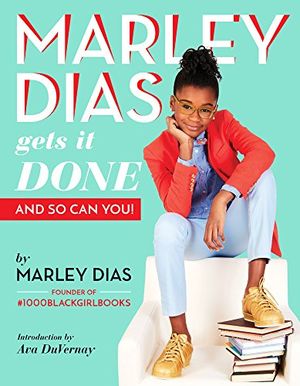 Marley Dias Gets It Done: And So Can You!

Erin Patrice O’Brien is a portrait photographer based in Brooklyn, NY. Her work has appeared in The New Republic and Bloomberg.