“If it’s ever fair to say that anything has ‘changed everything,’ it’s fair to say so about the internet,” Virginia Heffernan writes early on in her new book Magic and Loss: The Internet as Art.

The former New York Times writer has recently written a “poetics” of the internet, critically studying it as an art form and mapping the exciting cultural transformations brought about by the technology.

Magic and Loss celebrates both the sheer ecstasy of the internet, acknowledging the social connectivity and the immediacy of the experience, while also the aesthetic pleasures of new media forms like YouTube or smart-phone games. To Heffernan, these gains all demonstrate the “magic” of the internet. But with highs come lows, and Heffernan also mines the losses largely caused by the internet, including the decline of print in favor of digital reading.

Marrying this study with her own fascinating personal history with the internet as a pre-teen, Magic and Loss is a revealing look at how the internet continues to reshape our lives emotionally, visually and culturally.

What inspired you to write a “poetics” of the internet?

Well, I managed to get on the internet—when it wasn’t called the internet—in 1979. It was on a social network called ‘College XYZ.’ I was a child of 10 or 11, and I had somehow bamboozled my parents into buying a so-called ‘dumb’ terminal on the grounds that I was going to be practicing computer language with the aspirations to work at NASA.

Because of this particular way I came to the internet, I experienced it as a cultural phenomenon—in those days, a game with social elements. It sidelined me from social and real life, but it gave me a very early glimpse of this kind of culture we participate in now. So as I watched the progression of tech history, I became interested in how the arts expressed themselves and evolved online. Now, I see the internet as a great masterpiece of human civilization.

How has your career as a cultural critic shaped your views of the internet?

When I was working at the New York Times and I first saw ‘internet television’—now called online video—I was completely blown away by what was happening on the internet. Online, there was an incredible repository of this kind of video and I didn’t even know what to call it. Eventually, we called the videos YouTube videos, but it wasn’t television. These videos were beautifully unregulated and odd. To see all this diverse ‘flora and fauna’ online on YouTube that wasn’t strangled by hegemony or the networks or premium mainstream culture, it felt so radical to me. That was 2006. I then felt ready, able and empowered to write about this new form.

In your book, you really make the case to recognize the sheer “magic” and wonder of the internet. What is this “magic?”

I have a strong suspicion people actually don’t let themselves feel the magic of the internet that they’re already feeling. Recently, for example, I met a woman from Montana who said to me, ‘Oh, I don’t like the internet or computer.’ But then this woman said that she had made a friend who lived in New York City who also had fibromyalgia, a condition this woman had. They had met on an online message board for fibromyalgia and now she was going to New York to meet in-person. This woman said to me that she felt this friend had become her best friend. I said to her, ‘It actually sounds like you love the internet!’ It’s this incredibly uncanny use of the internet that is part of the magic.

The internet has enlivened and enchanted your life. You’re probably already experiencing the magic of the internet without knowing it. With this book, I want to make that magic palpable and visible. 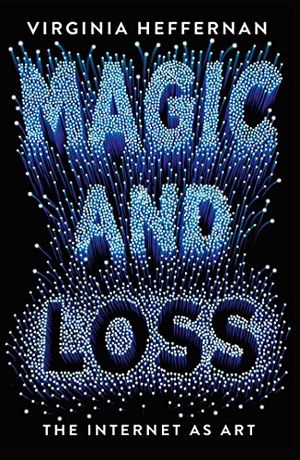 Magic and Loss: The Internet as Art

Buy Magic and Loss: The Internet as Art on Amazon.com ✓ FREE SHIPPING on qualified orders

Magic and Loss is described as following the tradition of other famous cultural critics and how they unpacked technology, including Susan Sontag’s look at photography and Marshall McLuhan’s analysis of television. Did these works influence you at all?

Mandates of investigative journalists are often ‘comfort the disturbed’ and ‘disturb the comfortable.’ I see the critic’s obligation to ‘familiarize the unfamiliar’ and ‘de-familiarize the familiar.’

One thing that Sontag and McLuhan did beautifully was oscillate that way. Familiarizing is like saying, ‘don’t worry, this thing looks strange, but it’s on a continuum with experiences we’ve had in the past.’ And so the de-familiarizing part is kind of the revelations or the problematizing—calling attention to the tricks of something.

With Magic and Loss, it became very important for me to use the methodologies of the humanities, which I’d been trained in, to talk about this particular phenomenon. With this book, I really wanted to map the measure of the magic and the ‘felt’ sensory emotion of the internet.

There is some anxiety about the changes being witnessed on the internet. What would you say to people who mourn the losses the internet has brought about? For example, the move from print books to e-readers.

Let me put it this way. There’s a moment in Moby Dick when Melville describes Ishmael and Queequeg sleeping together in the very cold inn, and they huddle together for warmth since they don’t have a fireplace. Melville makes the case for no fireplace in the bedroom because what you really want are those contrasting temperatures. You want to be huddled under the covers but then to come out into the cold, so you can enjoy that previous warmth, rather than uniform temperatures.

To me then, the internet has created this kind of reciprocal love and idolatry for anti-technology culture that can’t be digitized. There are two kinds of reactions to this feeling of loss brought about by the internet. Vinyl, live music, print books—they are making a huge resurgence, with a renewed appreciation and euphoria for the textures and materials in their physicality.

The other reaction has been this kind of grieving, something I have great compassion for. I found myself missing things because of how our experiences have somehow been flattened because of digital technology. Like vinyl to MP3, it’s the imperfection and the decay of the sound that we now miss.

But all we can do is push back on it, like going to live concerts, and allowing ourselves to feel the difference.