Adam Grant, a professor at the University of Pennsylvania’s Wharton School of Business, had a hit on his hands with his first book, Give and Take: Why Helping Others Drives Our Success, a look at how generosity can drive professional success. With his second book, Originals: How Non-Conformists Move the World, published earlier this month, he questions conventional wisdom about what makes a successful innovator. Over the course of his research, which involved studying and interviewing innovators in different fields, reading up on the history of creative thinkers and analyzing various social science studies, he reached a number of suprising findings.

What drew you to the topic of non-conformism and innovation?

We’re all fascinated by original people in the world. We see this in every domain. The great inventors and creators, the Steve Jobs archetype, the change agents we’ve all looked up to, whether Civil Rights activists or suffrage activists. I guess I was really curious about what these people have in common.

What were some of the most surprising findings in your research?

One, I expected original people to be big risk-takers. They weren’t. They’re not the people who would leap before they look. I love the example of Sara Blakely [the founder of Spanx]. She has the idea for footless pantyhose, but she keeps her day job selling fax machines for two years. She ends up becoming America’s youngest self-made billionaire, but plays it safe by making sure she has some financial resources to make it work.

Two, they feel the same doubt and fear that the rest of us do. They’re not just filled with tremendous conviction from day one.

Three, they procrastinate a lot. They’re able to use procrastination to generate new ideas.

Four, they have tons of bad ideas. I always thought these original people I admire have a perfect batting average. But they actually have more bad ideas than their peers. They just generate more volume.

Why do you think we’re so attached to the idea of entrepreneurs and innovators being risk-takers?

I think the myth persists because it’s more fun to tell that story. I think we love to idolize the heroic entrepreneur who drops out of school to go for broke. It also gives us an excuse to not be that person. We can look at Bill Gates and say ‘he dropped out of Harvard, I would never do that,’ leaving out the part of the story where he doesn’t drop out, he takes a leave of absence and he’s bankrolled by his parents. [Jobs never did return to Harvard.]

In your book, you talk about the “exposure effect,” the idea that successful innovators need to repeat their idea over and over until it’s accepted. Can you tell us more about how that works in real life?

I just happen to love this Carmen Medina example. Carmen was at the CIA and it was the 1990s, and she was really worried that sharing information with a printed report once a day was not enough, that the fax machine and email would be a lot faster. She started talking about this, and people thought that she was insane—that’s dangerous! Email is not secure! Carmen took a look at that and said ‘I need to get people used to that idea.’ So she brought it up in a lot of different contexts with different people, and then started blogging herself. Eventually she ended up getting the green light for the first internal Wikipedia, which seems to have prevented a few terrorist attacks. It takes 10 to 20 exposures to a new idea before people really accept and appreciate it. If you get shot down on a Tuesday, come back on a Friday. It’s about mastering the art of repetition—communicating the message to different people at different times in different ways, and trying to make it familiar.

How do you define “non-conformist?"

To me, being a non-conformist is not about non-conformity for the sake of being different. The goal is to try to make things better. That means someone who thinks for themselves and who doesn’t follow the crowd just because it’s popular.

How can we all become more non-conformist?

I think my favorite strategy is ‘vuja de’ [a concept named for its opposite, déjà vu. It’s when you enter a familiar situation but feel like it’s all new]. You try to look at something familiar in a new way. You’re standing in line waiting for a taxi and you see these cars passing by, which all have empty seats in them. You’ve seen them a thousand times before you start to say ‘why can’t I have one of those seats?’ And Uber is created. 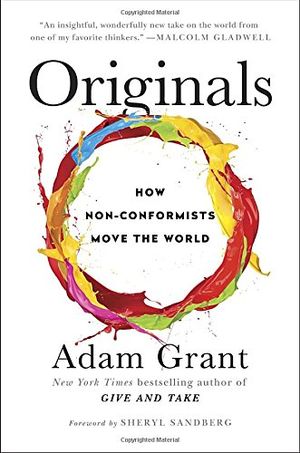 Originals: How Non-Conformists Move the World

The New York Times bestselling author of Give and Take examines how people can champion new ideas—and how leaders can encourage originality in their organizations.

What are some strategies for raising creative, non-conformist children who might grow up to be innovators?

Step one is to focus more on values than rules. One mistake a lot of parents make is they basically prevent their children from thinking for themselves by saying ‘these are the rules you have to follow.’ What parents of highly original children do differently is they focus on values and say ‘these are the guiding principles in our family, now let’s have a dialogue about what this means to you.’ You see kids get to take ownership over their own values and principles. Then when they grow up and confront other people, they’re comfortable standing their ground.

Also, give kids broad exposure to different ways of thinking. The greatest originals are not the ones with the greatest expertise. [They are the ones with the greatest breadth of experience.] Nobel Prize-winning scientists are dramatically more likely to dabble in the arts. Fashion designers who are highly innovative, one of the things that distinguishes them is having spent time not just living abroad but working abroad.

You write that oldest children are less likely to be creative thinkers because they want to please their parents and therefore become rule-followers. I’m an oldest child. Are we doomed?