According to psychologist Angela Duckworth, the personal quality she calls “grit” is more important than talent or intelligence in predicting success. Gritty people are more likely to stick out boot camp, win the National Spelling Bee and succeed in challenging careers (think: New Yorker cartoonist or award-winning novelist). Duckworth, a professor at the University of Pennsylvania, recently released a book, Grit: The Power of Passion and Perseverance, delving into her theory.

Can you give us a simple definition of “grit”?

The definition of grit is 'the combination of perseverance and passion for especially long-term and meaningful goals.'

Why is grit important?

What I discovered is that grit is different from talent or IQ. People for whom things come easily or quickly aren’t necessarily the people who stay with things and work hard to get better. Grit predicts success. It’s not that it’s important and talent’s not, but it’s more predictive for finishing things. For example, at West Point, your Whole Candidate Score [a combination of SAT scores, grades and other achievements assigned to incoming students by the school] is actually a marvelous predictor of how you’ll do at West Point in your four years, but not a predictor of whether you’ll stay your first summer [consisting of a grueling 7-week boot camp known as “Beast Barracks,” with a high dropout rate].... Grittier sales representatives keep their jobs in places where there is a high turnover. A lot of these really challenging arenas where there are a lot of people who give up, we find that grit is important.

What are the characteristics of “gritty” people?

They share four psychology assets, which are all buildable. Two of these [assets] really contribute to passion: interests and a sense of purpose. People who have a passion are fascinated by what they do. Interest is something you can develop. [Then there’s] a sense of purpose. By this I mean a ‘beyond the self purpose,’ where you feel that your work is important to people other than you. That too is something you can cultivate. Both inputs to passion are in themselves cultivatable. Perseverance has two inputs too. There’s perseverance with a lowercase ‘p.’ That’s working on something daily to get better. It’s really not much more complicated than that. People who are really gritty tend to put in daily deliberate practice to get better at what they do. You just have to go in there and work on things to get better. Then there’s upper case 'p' Perseverance, which is perseverance in the face of adversity. What gritty people have is renewable hope in the face of setbacks and real difficulties. No matter how lucky you are in life you’re going to have a few of those. When they have those, gritty people are likely to look at what they can change rather than dwell on what they can’t change. In sum, interest, purpose, practice and hope [are the characteristics], all of which I think can be built.

Is grit something you can cultivate in your children?

I think so. There’s a chapter in my book called ‘Parenting for Grit.’ That was something I wrote as a scientist and also as a parent of a 13-year-old and a 14-year-old. We believe that, and science would affirm, that the thing you are trying to do as a parent is create both a challenging and demanding environment. Kids wouldn’t develop all the skills we want them to have without their parents or hard classes or tough sports teams. But [they also need] support. Parents have to be truly warm and respectful of their kids’ autonomy. I hope my kids know they’re unconditionally loved and that I respect them. They are individuals and they don’t always agree with me.

What surprised you most in your research?

I think the early finding that grit and talent were so independent surprised me. To some extent I’d thought if things come so easily shouldn’t you succeed? So often, people with the greatest potential are the ones who aren’t realizing that potential. That surprised me. It might be because they don’t have a lot of practice getting up and practicing. I talk about John Irving [the renowned author of The World According to Garp and many other novels], who’s severely dyslexic. He said that he learned that if you really work on something you can get better, and he said that was a valuable lesson he didn’t know if he’d have learned if the path had been smoother.

Does grit play a role in innovation?

I do think so, to the extent that innovation requires you to keep considering solutions. Where do good ideas come from? I don’t think they come from the thin air. It does take a lot of passion and perseverance. It takes thousands of hours of dreaming and trying things and failing.

Why is it so common to attribute success to talent or genius, rather than hard work?

I think there’s an ambivalence about talent. In surveys, people say they value effort more than talent. But in other research, when you use measures that get at people’s implicit beliefs, when you describe people as a ‘natural talent’ you get higher ratings of expected excellence than if you describe people as a ‘hard working striver.’ We respect hard work, but there is a bit of magic and mystery to someone who seems to have things come easily.

I give a lot of talks, and more often than I could have imagined people will tell me ‘you’re a natural.’ And I’m just thinking, ‘oh the irony.’ It’s so invisible to them how many talks I’ve given and how much feedback I get. People who have told me I bite my lip too much or I talk to fast or I talk too slow. All those tiny little improvements that are invisible to the world. It’s easy to think someone who’s good at what they do was always good.

There’s been a lot of talking lately about teaching grit in schools. Do you worry that grit could be oversold?

I don’t have a grit curriculum. I’ve never studied one. It’s not that I don’t think these things could be developed. I think the fact that teachers are interested in things that are going to contribute to their kids’ achievement is a great thing, I’m not saying they shouldn’t do it. But there is no grit curriculum [that Duckworth herself has written].

I don’t think grit is enough. If you had all those lessons taught to kids, would it be enough to compensate for poverty or abuse or ridiculously, woefully underfunded classrooms. I worry that people will mistake that grit is the only thing children need. There are so many things children need to thrive. 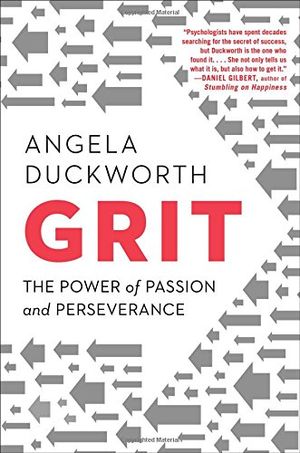 Grit: The Power of Passion and Perseverance

Are there things for which grit is not sufficient?

You have a Grit Scale quiz on your website to evaluate your own level of grit. If someone thinks they’re deficient in grit and this bothers them, what can they do to become grittier?