In 2002, Richard Florida became America’s best known urbanist with the publication of his book, The Rise of the Creative Class. In it, Florida posited that the “creative class,” a group which included artists, scientists and engineers, as well as educated knowledge sector professionals such as lawyers and finance workers, was the main driver of cultural and economic flourishing in America’s cities. The theory was enticing to many urban planners and municipal politicians, and cities across the country aimed to follow Florida’s advice on becoming “creative cities.”

But now, 15 years later, Florida wonders if he might have been too optimistic. Yes, the creative class drives cultural and economic flourishing, he says. But mainly for itself. In fact, the cities that have the most innovative and creative economies often have the worst social and economic inequality. It’s this new, less idealistic theory that his new book, The New Urban Crisis: How Cities Are Increasing Inequality, Deepening Segregation, and Failing the Middle Class – and What We Can Do About It, is based on.

In The New Urban Crisis, Florida talks about “superstar cities”—a handful of global cities with highly disproportionate levels of industry, talent and wealth, which are leaving other urban areas in the dust. And he talks about how, even within successful cities, the gap between the rich and the poor, between the educated and the uneducated, and between various ethnic groups has never been deeper. He discusses how to stop and reverse this trend, a prescription that includes improved transportation between successful and less successful cities, a reform of zoning codes to allow for more affordable housing, and the raising of wages for service workers.

Smithsonian.com spoke with Florida about his book.

In your book, you write that “the problem of inequality is a fundamentally urban one.” What exactly do you mean by that?

What I mean is a couple things. First, we’ve paid a lot of attention in this country and the world to socioeconomic inequality, but really what we are facing is geographic inequality. We have growing inequality between ‘superstar cities’—big, dense cities with finance and media and arts, tech hubs—and places that are either Rust Belt towns built on heavy industry or Sun Belt towns build on sprawl. We find that as a city gets bigger, denser, more productive and more economically successful, inequality rises. In a way, the more successful a city or metro area becomes, the more unequal it becomes, and that is quite challenging.

What do you mean when you talk about the “winner-take-all” city?

There have been brilliant economists who argue that talented people—whether Taylor Swift or Jay Z or Beyonce, whether a CEO or an entrepreneur—take an increasingly disproportionate share of the gains. It’s a winner-take-all, skewed distribution of money. And in my work I simply say that this kind of phenomenon also takes place in cities. The concentration of highly innovative economic activity—finance, journalism, the arts, high tech enterprise—are increasingly clustered and concentrated in metro areas. If you take the San Francisco Bay area, the Acela Corridor [from Boston to New York to Washington D.C., the cities connected by Amtrak’s Acela Express service], Southern California, that’s two-thirds of all tech startups [in America]. That’s what I mean when I say winner-take-all. That’s getting worse, not better. The same clustering of people and talent and immigrants in the Bay Area, in greater Boston, in Lower Manhattan, that same clustering also divides our economy. It has produced this backlash. People in other parts of the country say ‘we don’t like this, they’re pulling away from the pack, we don’t like their values.’ The reaction has been the rise of populism, or Trumpism, if you will. The rise of populism is not only a product of our economic divide, it’s a product of a growing social inequality. These hubs really create a different culture than the rest of America. 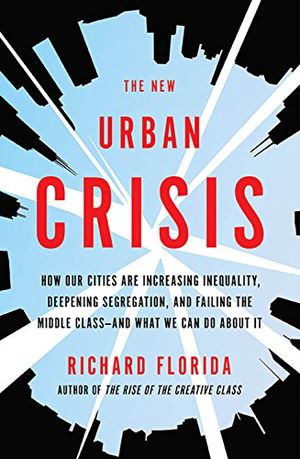 The New Urban Crisis: How Our Cities Are Increasing Inequality, Deepening Segregation, and Failing the Middle Class-and What We Can Do About It

In recent years, the young, educated, and affluent have surged back into cities, reversing decades of suburban flight and urban decline. And yet all is not well, Richard Florida argues in The New Urban Crisis.

Why do you think some people think gentrification is evil, and what’s your own view?

People are naturally scared that people are going to be pushed out of their neighborhoods, and that has certainly happened. Certain parts of New York City and certain parts of San Francisco have really seen this massive influx of the super-rich. But that’s not the whole story. Gentrification is more limited than most people think. It has happened mainly in these superstar cities and knowledge hubs. It has not necessarily happened in Pittsburgh and Cleveland and Detroit. Many of these cities could use more of this ‘back to the city’ movement. The 'back to the city' movement can be a good thing. Gentrification gets a lot of attention, but the problem is how we’re really developing these clusters of advantage in the city, and these clusters of disadvantage out in the suburbs. It could be that the 'back to the city' movement is helping us create the resources we need to deal with inequality. We need to move from a winner-take-all urbanism to a more inclusive prosperity.

You talk about how some neighborhoods in certain superstar cities have gone past gentrification to what you call ‘plutocratization.’ Can you talk about what that means?

Every time I’ve visited London in the past while, invariably a cab driver points at a building overlooking Hyde Park—it’s a lovely glass building, next to a luxury hotel—and says ‘look at this building, its apartments go for 50 million pounds and no one lives there.’ We now have a growing awareness that in London, and in areas of New York City—particularly 57th Street, sometimes called 'Billionaire’s Row,' and the Upper East Side—we have neighborhoods inhabited by the growing global super-rich who are buying properties as status symbols and investments, and they only use them a few weeks a year. That’s happening in parts of Miami Beach too. Some of these cities are becoming hubs of the global plutocracy. But that’s not really transforming cities. All the billionaires in New York would barely fill up one condo building.

Are there any cities that are doing well without rising inequality?

No, and I don’t think there are anywhere in the world. You take the most progressive cities in the world, the metro areas that had the largest number of votes for Mrs. Clinton, and there is a positive and significant correlation between liberalism, however you want to define it, and two things—the level of innovation, and the level of inequality and economic segregation. The densest, most innovative cities are the places that have the highest level of inequality. It’s something that is baked into the structure of our economy. Places that are economically stagnant maintain their middle class. There’s really no place that is avoiding this.

So what are some things cities should be doing to reduce inequality?

There’s going to be no federal salvation under Trump with Republicans in control. Cities are going to have to do this themselves. Universities and other institutions are going to have to come to the table. We know inequality is highest in places with the highest number of innovation workers, like around universities. These so-called anchor institutions have been part of the problem, but now they’re going to have to say ‘we can’t cut ourselves off from the city and build a moat, we have to be part of building an inclusive city.’ Not only is it the local government’s responsibility to build an affordable city, but if you’re a university, if you’re a hospital, if you’re a real estate developer, you’re going to have to come in and help create better jobs and build affordable housing. It’s going to be incumbent upon our anchor institutions to say ‘look, we’re in this, and we’re going to make sure we pay a living wage.’ Real estate developers will have to say ‘we’re going to make sure that our tenants are actually providing people with goods jobs.’

Of course, as a nation we have to invest in transit, to connect our crumbling suburbs to our cities. We need to invest in transit connections and even high-speed rail. If you look at the New York-DC area, you see they’re connected by transit. One way to think about helping places like Cleveland or Akron or Youngstown is to connect them by high-speed rail to hubs of opportunity [more innovative and economically successful cities].

[This change] really can’t come from Washington, because we’re divided. And there’s no one-size-fits-all solution. The problems of Houston are different than the problems of Dayton or Akron. Each one of these places has a somewhat unique set of challenges. Some are overdeveloped. Some don’t have enough economic activity. Some are sprawling and need more transit. Some have great research universities, some don’t. The only way to do this is to take power out of Washington, keep more of our tax revenue at home and enable our cities to build their economies and rebuild their suburbs in the way they know best how to do.

We’ve got no other choice.