Could High-Flying Kites Power Your Home?

Nearly a dozen companies are betting on computer-controlled, airborne wind energy to electrify the future 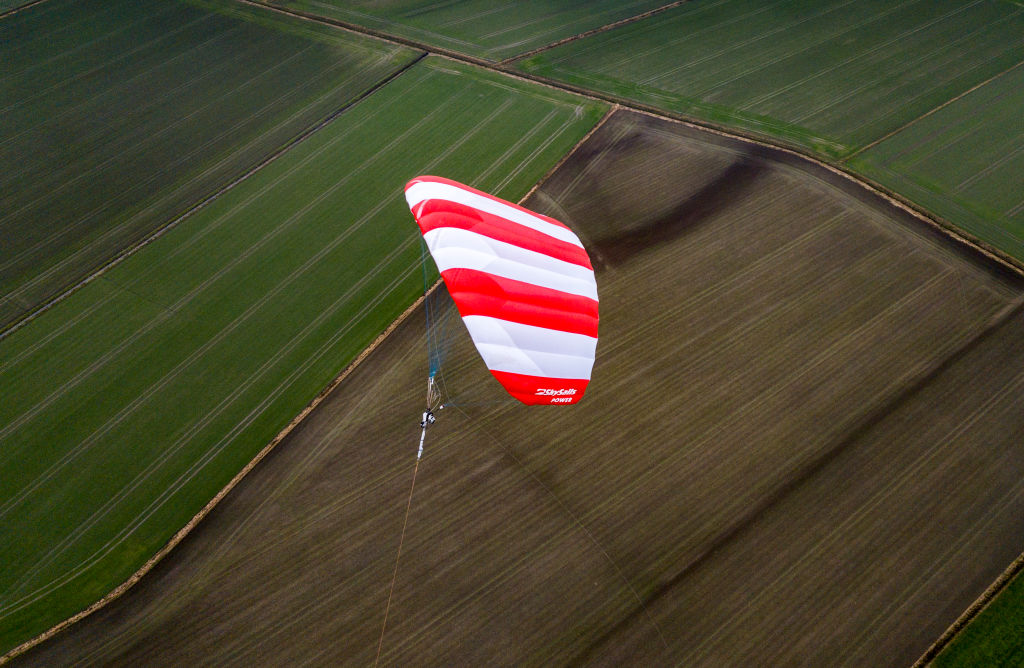 Steered by a computer to loop in the wind, this kite converts wind energy into electricity via a tether attached to a generator on the ground. Currently, such kites can generate enough electricity to power 60 average US households. Axel Heimken/picture alliance via Getty Images

Any kid who’s ever flown a kite has learned the lesson: Once you can get the kite off the ground and high into the air, you’re more likely to find a steady breeze to keep it aloft.

A fledgling wind power industry is taking that lesson to heart. Flying massive kites 200 meters or more above the ground, companies are using the wind they find there to generate electricity.

At least 10 firms in Europe and the United States are developing variations of this kind of kite power. If they succeed, kites could make it possible to build wind farms on land that isn’t windy enough for conventional wind turbine towers. Kites might also be a better choice for offshore wind power, and one day could even replace at least some anchored towers now in use.

“It’s cheaper to manufacture, cheaper to transport and also has higher efficiency,” says Florian Bauer, co-CEO and chief technology officer of Kitekraft, a Munich-based company developing a kite power system. The carbon footprint is also much smaller, he says. “If you have all those advantages, why would anyone build a conventional wind turbine?”

But to become a widespread source of electricity, airborne wind energy, as it’s also called, needs to overcome a number of technological and commercial hurdles, as Bauer and colleagues describe in an upcoming paper in the 2022 Annual Review of Control, Robotics and Autonomous Systems. And it will need to demonstrate that it is safe, won’t harm wildlife and won’t create intolerable noise and visual disturbances for neighbors.

At the moment, kite power is in its infancy. Most companies are working on relatively small pilot projects, and none have scaled up their technology to the megawatt range that would make them comparable to conventional wind turbines. But small versions are already on the market.

In 2021, Hamburg-based SkySails Power became the first company to offer a commercial product. Its production model consists of a soft, steerable kite up to 180 square meters in area. The kite is attached by an 800-meter tether to a ground station contained in a shipping container.

In operation, the kite makes large, graceful figure eights in the sky and powers a ground-based generator capable of an average output of 80 kilowatts — enough to supply electricity to about 60 average US households. That’s small compared with a typical 2.75-megawatt wind turbine but is similar in scale to many portable industrial diesel generators. The unit is designed for use in remote locations away from the power grid.

Eventually, companies want to build larger kites capable of generating megawatts of power. They envision hundreds of kites grouped together on wind farms, providing electricity to the grid.

Wind close to the ground tends to be slowed down by friction with trees, buildings and hills, and the ground itself. So the higher you go, the faster the wind can travel — at 500 meters, the breeze moves between 3 to 7 kilometers per hour faster, on average, than it does at 100 meters. Over the last few decades, there have been a number of proposals for taking advantage of these speedier, elevated winds, including sending turbines up on lighter-than-air craft, or suspending them from stationary kites. But most companies, like SkySails, are pursuing an approach that makes use of steerable, computer-controlled kites that fly patterns in the air to harvest more energy.

Airborne wind energy systems use two basic ways to generate electricity. Ground-based approaches, like SkySails, use “pumping power” to run a generator on the ground. The ground-based end of the tether is wound around a winch, and as the kite flies across the wind it pulls against the tether and unwinds the winch, driving a generator that produces electricity. Then the kite is allowed to float while it is reeled back in, and the cycle starts again.

The other approach is to generate the electricity onboard the kite. Onboard generation uses a rigid kite, similar to an airplane wing, which supports small wind turbines. When the kite flies, the wind runs the turbines and electricity generated by the craft is sent down the tether to the ground station.

Kitekraft, Bauer’s company, uses the onboard method, which allows it to make dual use of the turbine blades. During launch and landing, the blades are powered by a motor and become propellers that allow the kite to fly and hover like an airborne drone. Once the kite is at the proper height, the turbines switch to generating energy from the wind.

Kites offer a potential advantage over today’s wind towers in terms of material used. Wind turbine towers require concrete foundations and steel structures just to keep the turbines at the right height. In kite-based systems, the structures are replaced by a relatively small ground station and a lightweight tether. A study by Airborne Wind Europe, a trade association, found that a 50-megawatt kite farm would use 913 metric tons of material over a 20-year lifespan, compared with 2,868 metric tons for a typical wind tower farm. Using less material could make kite-based systems both greener and cheaper to build.

Kites may also prove useful for deep-water offshore wind generation. Today, when the water is too deep to build a foundation, wind turbines instead float on massive, barge-like structures that must be able to bear the turbines’ weight and keep them stable. Because kites are less massive, they could use lighter and cheaper barges.

But these advantages come at the cost of complexity. For kites to make sense economically, they need to operate for long periods and with little or no human supervision. That presents a tough computerized control problem, says Chris Vermillion, director of the Control and Optimization for Renewables and Energy Efficiency Lab at North Carolina State University and an adviser to Windlift, a kite-power technology company.

The kites aren’t simply floating passively in the air. Instead, they use the aerodynamics of the kite to fly “crosswind” patterns, a bit like a boat tacking back and forth across the wind. Flying perpendicular to the direction of the wind, their wings generate lift and pull even harder against the tether. This extra lift translates into extra speed, which can either pull the tether with more force for ground-based generation or be turned into greater airspeed to drive onboard turbines faster. Either way, the power available increases by at least an order of magnitude compared to flying without the crosswind motion.

But such tricky maneuvers require constant adjustment and control of the kites, by either a pilot or a computer. Rigid kites are controlled by adjusting steering components such as flaps and rudders in the same way that airplanes are flown. Soft kites are controlled by adjusting the lengths of steering lines, similar to the way a parachute is guided.

The most advanced kite systems today are capable of flying under computer control for hours or days at a time, using either onboard and on-ground computers to make constant corrections in the steering. They tend to work very well while the wind remains steady, Vermillion says.

But to go mainstream, the kites will have to be able to deal dependably with sudden and unpredictable changes such as strong wind gusts. They will also need to be able to take off and land automatically, so that they can come down during bad weather and go up when the wind is right.

“More work needs to be done to bring the technology to the level where the operational lifespans of the devices are on the order of years and decades, as opposed to demonstrations that last days and weeks,” Vermillion says.

There’s also the problem of scale. Smaller kites are cheaper to make and easier to develop. But because the weight and drag of the tether increases with height, small kites don’t operate as well at 300 meters or higher, where the wind tends to be strongest. Companies want to scale up to larger, more efficient kites that can fly higher and produce megawatts of power. But that comes with expense and risk.

Scaling up — and striking out

The fate of a company called Makani is a cautionary tale. The California-based company had the backing of Google’s parent company Alphabet and was working toward generating megawatt-scale power. But in 2020, Alphabet withdrew funding, and the company closed.

Makani was a pioneer in the technology, but faced a number of problems, including difficulty controlling the kites and several crashes. In a public report, Makani CEO Fort Felker said the company intentionally pushed ahead quickly, increasing the size of its kites in large steps, often without solving previous technological problems.

Bauer says that by scaling up so quickly without solving technical challenges along the way, the company ended up with a design that was too difficult and expensive to modify. On the other hand, he’s sympathetic. Companies that take too long to scale up to a marketable size may lose the support of their investors.

A final hurdle will be to ensure that the technology has acceptable social and environmental costs. Conventional wind farms often face opposition from nearby residents who are worried about the noise, visual distraction and aesthetics of wind turbines. Advocates of kite farms expect they will have less visual and noise impact than conventional wind towers. But according to an analysis of published studies, there is no empirical evidence that that is true. Although the kites are less massive than towers, their swooping motions and the noise they make might still cause as much or more disruption than conventional towers, according to the authors.

It’s also unclear what impact the kites will have on birds, the report says. Again, advocates think they will likely be safer for birds than wind turbines, since the kites fly higher than birds typically do. However, the tethers themselves move quickly and are hard to see, and birds might have a hard time avoiding them.

It remains unclear how widely used kite-based wind power will become. Advocates like Bauer are confident that they can solve the engineering and computing problems to make the kites cost-effective.

But a 2021 US Department of Energy report to Congress sounded a cautionary note, calling kite power “an immature and unproven technology that requires significant further development before it could be deployed at meaningful scales at the national level.” The cost of electricity created by conventional wind turbines has also continued to fall, making it that much harder for kite power systems to show that they have an advantage, the report said.

“I do not see airborne wind energy systems as a replacement for most existing conventional turbines that are installed on land,” agrees Vermillion. But he does think that they will find a niche over the next decade in military and off-grid uses, potential applications the company he consults with lists as among their targets for kite power. And he thinks that at some point they could be the preferred technology for deep-water wind farms, where their light weight will give them a big advantage over tower-based turbines.

Knowable Magazine is an independent journalistic endeavor from Annual Reviews.