There’s a common misconception about genocide that’s bothered Omer Bartov for a long time. “We tend to talk about genocide as something that calls for dehumanization,” says the Brown University professor of European history. “We think of it as a process where you have to detach yourself from the victims, to distance yourself from them as much as you can, and to create a system of detachment.” The reality of mass murder, he says, is far more intimate.

Bartov should know. For the past 20 years, he’s reconstructed the 400-year history of one Eastern European border town to show the deep-seated roots that led to genocide during World War II.

Anatomy of a Genocide: The Life and Death of a Town Called Buczacz, published this week by Simon & Schuster establishes the longstanding, multigenerational relationships that existed among Ukrainians, Poles and Jews in the town of Buczacz (pronounced Buh-cha-ch) for hundreds of years before the war unfolded and neighbors turned on neighbors. In a few years’ time, the German and Ukrainian police would almost completely eradicate Buczacz’s Jewish residents. Ukrainian nationalists, in turn, would devastate Buczacz’s Polish population. 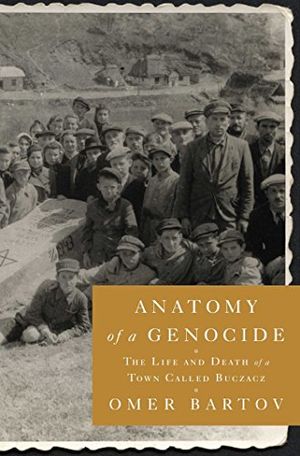 Anatomy of a Genocide: The Life and Death of a Town Called Buczacz

In Anatomy of a Genocide Omer Bartov explains that ethnic cleansing doesn’t occur as is so often portrayed in popular history, with the quick ascent of a vitriolic political leader and the unleashing of military might. It begins in seeming peace, slowly and often unnoticed, the culmination of pent-up slights and grudges and indignities.

The story of Buczacz is the story of genocide as it unfolded in one town, but also the larger story of how such mass atrocities can transpire in communities the world over. “You can take a society in which people had lived together for centuries, and that very proximity, that very relationship between neighbors can have a dynamic of violence and self-justification,” Bartov says.

The historian began to seriously probe the topic of modern genocide in 1989, after moving to the United States in his 40s. In his native home of Israel, Bartov focused on military history, looking into the dynamics of ideology, motivation, indoctrination and war crimes. Those interests led him to focus on modern German history, with an emphasis on Nazi Germany. But he hesitated to study the Holocaust directly, given how such work would inevitably be used within Israeli political discourse.

When he moved to the United States, he felt freer to study the Holocaust. But he soon found himself bothered by how the genocide was being presented. “I became increasingly unhappy with discussion of the Holocaust [as] being unique, particularly as a historian,” he says. “You can’t understand a historical event without contextualizing it—that is putting it in some kind of a context and comparing it to others. When you say some event is ‘unique’ than you are speaking in metaphysical terms. It stops being history.”

On a work trip to Germany, he saw something that also concerned him: Colleagues were teaching the Holocaust with little emphasis on memoirs or first-hand testimonies. “They were very much looking at it from the point of view of the perpetrators and the organization of genocide,” says Bartov. “They said, ‘Well, we as Germans, that's what we need to do. We need to understand why our fore bearers had done that.’ It made sense from their point of view, but it didn't make sense to me so much as an understanding of genocide, as a complete understanding.”

He wondered: how would genocide look when it was studied not through the eyes of the large systematic forces, but rather through the individuals carrying it out?

As it so happened, he already had one town in mind for a case study. He decided to ask his mother, who was in her early 70s, about her childhood in Buczacz, the town that the famous Israeli novelist Shmuel Yosef Agnon also came from.

In the late 1960s, after Agnon had won the Nobel Prize in Literature, his family had hosted the famous author during a period where they lived in London. Bartov remembers his mother coming up to Agnon and saying, “You know, I also come from Buczacz.” He recalls that Agnon answered, perhaps a little arrogantly, “Now that I receive the Nobel Prize, everybody says that they come from Buczacz.”

But Bartov’s mother really was from there. Bartov knew that she had emigrated to Israel before the war in 1935, but up until that point he hadn’t asked her for details about her life in Buczacz. That summer, he paid her a visit in Tel Aviv. When they sat down together in his mother’s kitchen, he asked her about her childhood for the first time.

What she said surprised him. “She knew, of course, what happened there, at least the rough outline, and she knew that all of the rest of her family was murdered,” he says. But she did not speak about genocide. Instead, she remembered friends who were Ukrainian; she remembered studying Polish in school; speaking Yiddish at home. Her memories were fond ones.

“That really interested me,” says Bartov. “What was it in a town like that—and there were hundreds of them—that made it both possible for children growing up there to be quite happy in this multi-ethnic multi-religious environment, and yet that these same places produce so much resentment and rage and envy that when the time came people turned on each other?”

At that time, his idea was to explore the relationship between the victims and perpetrators in the town during World War II. “I thought it would take me a couple of years, because it's a small town,” says Bartov. Instead, he ended up spending nearly 20 years researching, traveling to nine different countries, teaching himself new languages and accumulating a room full of documents.

In Buczacz and other towns, the common narrative of the Holocaust is that Germans entered intending to kill Jews. But in order for them to so completely wipe out Jews, they needed the cooperation—often the all-too-eager cooperation— of townspeople. As Bartov came to understand, there could be no bystanders in a town like this. “This term simply doesn't apply in small towns were mass violence is perpetrated. Everyone is involved,” he says. “Because it's the neighbors who may either save you or betray you. They'll either shelter you or denounce you.”

“The sense of being victim gives you a sense of moral superiority and helps you identify those who are against you, particularly those who are right next to you, “ says Bartov. “What is so, I guess, interesting, but also very troubling, is the extent to which this discourse of victimhood in situations such as World War II gives you license to perpetrate violence.”

As a genocide scholar, Bartov is used to documenting accounts of inhumanity. But at times, even he found it hard to not to let the research get too personal. At one point, he had to pause when collecting accounts of female survivors of these atrocities who were 11 and 12, around his daughter’s age at the time. “There were moments that I just, I could not read or listen to these accounts,” he said, “because I could not connect the life of my little daughter's home with the kind of ... It was simply inconceivable.”

The year many of these female witnesses happened to be born—1924—also shook him. That was the same year his mother was born. “Had she stayed there and had her family not left in 1935, and had she survived, which was highly unlikely, she would have gone through those experiences that these women describe,” he says. “It made it very personal because it was basically a matter of four years. Had they not left in '35, by '39 they would not have been able to leave. Her life and my own life, had it even happened, would have been completely different.”

But the dwindling number of survivors—who until this point had felt no one would ever tell their story—pushed him forward to complete what often felt like a Sisyphean task. He was compelled forward, he says, by a sense of guilt. “They were not young, and I was not fast,” says Bartov. Most of the people he spoke with died between the time he interviewed them and the time he finished the book. One was his mother, who fell ill shortly after Bartov’s visit to Tel Aviv in 1995 and did not live long enough to join him in a return trip to Buczacz.