Gunshots ripped through the late-spring air near a dusty U.S. Army outpost in rural Minnesota in May 1864. Militiamen who were engaged in a campaign against local Indians shot a Dakota man twice: one bullet struck him in the head, shattering his skull; the other tore through his mouth or neck. Either wound alone could have been fatal.

The man likely died instantly or bled to death in seconds. Healthy and strong in life, he now lay on the ground completely disfigured. Described in contemporary newspaper accounts as a “hostile Sioux”—and later by scientists as a man of distant Asiatic descent—he was probably between 25 and 35 years old.

A single incident such as this, even a deadly one, on the distant Minnesota frontier might have soon vanished from memory in a nation focused on violent clashes with Native Americans across the region and the raging Civil War miles away. What happened to the body of this particular young Dakota man, however, was striking. The man’s earthly remains were about to play a small part in an unfolding drama involving major museums, obsessive and sometimes eccentric scientists, and an array of amateur collectors. It is a story marked by evolving efforts to understand the human body in the language of race and human history. These efforts sometimes clashed, competed and even overlapped in complex ways.

Leaving dark trails of blood, the soldiers dragged the corpse across the grass to a nearby fort. Word of the killing spread quickly. White civilians began gathering to celebrate. Settlers beat the lifeless body. Bones cracked. The scalp was cut off and carried away as a souvenir. Once the settlers were finished, someone hastily buried the body in a shallow grave. 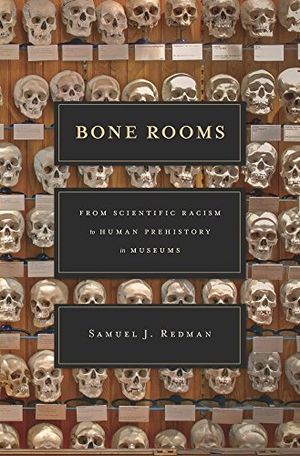 Bone Rooms: From Scientific Racism to Human Prehistory in Museums

Samuel Redman unearths the story of how human remains became highly sought-after artifacts for both scientific research and public display.

In the days that followed, one German-American newspaper reported on the skirmish from the settlers’ perspective. The paper proclaimed, “It is time to hunt down these red beasts with iron pursuit.” Newspapers crowed about the small victory over the Native Americans, but the incident did not settle the tensions that had boiled over two years earlier in the Dakota War of 1862.

The single violent encounter would not have stood out, and the man’s grave might have been soon forgotten. But only a few months after the Dakota man’s death, his skeleton was quietly removed from the ground. The bones were brought to a military doctor stationed at the fort who carefully laid them out on a makeshift wooden operating table.

The acting assistant surgeon, a measured and experienced man named Alfred Muller, lamented the circumstances surrounding the young Native American’s death and mutilation. In a careful hand, he wrote a letter describing the body as having experienced “unnecessary ill treatment.”

Muller no doubt possessed his own vivid memories of violence between settlers and the American Indian tribes residing nearby. Just a few years earlier, he had received high praise for his treatment of wounded settlers following one particularly grisly attack. Despite his firsthand experience with frontier violence, he found the recent beating of the corpse of the American Indian man utterly deplorable. But for Muller, what was done was done.

With the bones now laid out before him, he delicately handled and examined each one, steadily writing his own detailed notes about the body. The smell of the body was different now, many days later, earthier. Bones were indeed badly cut and damaged in some places—however, many individual bones had been spared injury. Muller was fascinated. Despite his feelings about the treatment of the corpse, he did not rebury the body after his careful examination. Instead, he boxed the remains and sent them to Washington, D.C., where the U.S. Army had recently opened a medical museum. Muller believed the skeleton might be useful to scientific endeavors described in a museum catalogue he had read. Several weeks later, he sent a second parcel containing the man’s missing hand, which Muller had managed to procure from some unnamed source in the name of science.

The remains, which were eventually moved to the Smithsonian Institution, were swept into an expanding project to understand humanity through a changing kaleidoscope of ideas about the human body, race and, increasingly, human origins and prehistory. Scientists, eager for evidence to support their ideas, organized spaces colloquially known as “bone rooms.” In these spaces, they studied the bones in an effort to classify the races and develop an understanding of the deeper human past. They relied heavily on collectors of all kinds to gather specimens. Professionals and amateurs alike—influenced by a broad spectrum of ideas—began gathering and organizing human skeletons from around the world. Museums concerned with natural history, medicine and anthropology—in their quest to solve riddles connected to race and human history—turned to human remains for answers.

Starting around the time of the Civil War and stretching deep into the 20th century, gathering human skeletal remains was a common intellectual, cultural and social pursuit. Though not limited to professional collectors, the practice centered primarily on an important, changing and diverse network of scholars and scientists affiliated with a number of museums in the United States. Donations allowed certain museum collections to grow rapidly in major cities across the country. Bones were sometimes sent to museums unsolicited. Others were gathered with more systematic intent—carefully removed from cemeteries or other archaeological sites. The gradual, piecemeal and sometimes haphazard acquisition of human remains and subsequent attempts to draw important ideas from their study eventually developed into an outright competition to fill bone rooms with rare specimens.

The desire for scientific collections and competing ideas about race and the history of humankind fueled the growth of bone collections, which outgrew storage areas and spilled into hallways and occasionally onto gallery floors in exhibitions. Physicians and anatomists who came of age during the Civil War were keenly aware of efforts to systematically utilize human skeletons for science. Some sought out the chance to get involved in the project themselves. Those involved disagreed on how best to categorize the races, care for the bodies, and understand them in the tapestry of human history—but they agreed on the inherent value of the project to establish and build bone rooms.

Packages accompanied by letters, many with stories like Alfred Muller’s, arrived almost daily at the museum from around the American West and from expeditions around the globe. After arriving in Washington, the Dakota man’s bones were placed on display in the Army Medical Museum, though details about any possible exhibit are murky. The skeleton was most likely used to teach visitors about an emerging field called “comparative anatomy,” a long-standing scientific endeavor to classify human races on the basis of physical features and appearance.

The bones would have been identified as those of a Native American man, a Dakota stand-in for many tribes across the Americas—a lone and broken man intended to represent a unique and vanishing race. In some instances, bones were presumed to be similar enough to be simply interchangeable within racial categories; if the jaw was too broken or shattered for display, the museum could replace the broken or missing bone with another, similarly sized portion of a different Native American skeleton.

Medical doctors, anthropologists, and other scientists in the United States and Europe came to believe that perceived behavioral attributes of different peoples—such as intelligence and industriousness—could be directly correlated with physical characteristics, such as the size and shape of the skull. Some even believed that racial attributes could be measured and, indeed, ranked on a grand scale of humankind.

George A. Otis, who personally collected and measured hundreds of skulls for the Army Medical Museum, concluded simply, “The American Indians must be assigned a lower position on the human scale than has been believed heretofore.” His conclusions, though drawn from skewed measurements and based on faulty assumptions about the size of the brain cavity and its link to human intelligence, were nevertheless offered with the certainty that ample evidence was thought to afford. While not all scientists were as bold and direct in their racist conclusions, collecting, studying, and displaying nonwhite human remains largely supported the scientific (and pseudoscientific) racism that dominated the era.

Significant ideas about the human body were hotly contested between the late-19th and early-20th centuries, and scientists frequently turned to human remains collections for evidence to support new theories responding to old questions. These questions touched on many apparent problems and emerged in unique forms over time. Why do humans from distinct places appear different? What happens to our bodies when we age? Are some people inherently better suited to thrive in the natural and modern world, and if so, why? In transitioning from grave to museum bone room, human remains were endowed with new and powerful scientific meaning. By the turn of the century, skeletons became a key tool for testing the numerous theories surrounding race that were developing across a range of disciplines in the United States. At almost every turn, however, the grand vision laid out by the early founders of these collections—who claimed that secrets of racial evolution would be laid bare in the scientific examination of human bodies—seemed to veer further off course. Grave robbing, scientific racism and ethnocentrism ultimately damaged the reputations of museums and scientists on a global scale.

Despite the waxing and waning influence of these collections in American culture, issues surrounding the process of gathering, researching and displaying human remains do not represent a simple declension story; debates surrounding human remains collections reemerged in new forms later in the 20th century. Ethical challenges from indigenous communities—including demands for ancestors to be returned for permanent reburial—reshape the story.

Remains are spread throughout large and small museums across the country, and cataloguing information is often vague and limited, though the information that museums provide to tribes, researchers and casual visitors has grown much more detailed in recent years following the completion of federally mandated surveys. Recent estimates have placed the number of Native American remains in U.S. museums at about 500,000. Adding to this figure are smaller collections of bones from African Americans, European Americans and indigenous peoples from around the globe. It is estimated that museums in Europe have acquired an additional half a million sets of Native American remains since the 19th century. More than 116,000 sets of human remains and nearly one million associated funerary objects are considered by museums in the United States to be culturally unaffiliated, meaning no specific ancestral origin has been ascribed to them. Although potentially surprising to a museum visitor, these estimates of the size of human remains collections in the United States and Europe are conservative.

The history of these collections is dramatic, occasionally punctuated by unexpected twists. The story emerges from an ongoing competition to establish the largest and most prestigious museums in cities across the United States. At times driven by both ego and intellect, scientists established a new field as they collected, their studies working to shape ideas about race and what it means to be human. For scientists who collected the dead, the desire to obtain remains for growing bone rooms often suspended or displaced codes of ethical behavior. Museum curators, as well as amateur collectors, competed and collaborated to understand the body as a scientific object; at the same time, visitors to museums that displayed bodies were continually enthralled, almost surprised, by the humanity of ancient and recent bodies they found exhibited before them.

This is an adapted excerpt from Bone Rooms: From Scientific Racism to Human Prehistory in Museums, published by Harvard University Press.

Samuel Redman is an assistant professor at the University of Massachusetts-Amherst where he teaches modern U.S. history, oral history and public history.