On November 25, 1963, the nation’s gaze was transfixed by the horse-drawn caisson and final burial of President John F. Kennedy. But in the shadow of this grim but stirring procession—on that same Monday—Lee Harvey Oswald was quietly buried in Fort Worth, Texas.

Oswald’s wife Marina, two daughters, brother Robert and mother Marguerite were the only mourners. The public was prohibited from Rose Hill Cemetery, and no friends or other relatives showed up. To avoid argument, the gravediggers were told they were digging a hole for “William Bobo.”

As Secret Service, FBI agents, and a heavy police guard stood watch, seven newsmen serving as volunteer pallbearers carried the pine coffin to the grave. Before the casket was lowered, the lid was opened for the family to see Oswald’s face one last time. As UPI reporter Preston McGraw noted, "One at a time, quickly, the two women bent down and kissed the corpse."

Two Lutheran ministers had agreed to conduct the service at the request of the Reverend Louis Saunders, an interdenominational Christian minister. But both reneged after learning that the funeral would be outside by the grave rather than in a chapel, fearing the potential threat of snipers. Saunders, who came as an observer, was asked by Marguerite to officiate.

After a quick, makeshift service, Marguerite barely missed a beat before stepping up to a television camera: "Lee Harvey Oswald, my son, even after his death, has done more for his country than any other living human being."

It was a statement she memorialized by etching it in copper. It was one of many strange, discordant reactions that led many to question her sanity in the days and years ahead—and to find the likely source of many of her son’s problems.

Several days after the funeral, Texas radio and TV reporter Bob Huffaker arranged a phone interview with her. He had been covering activities at the Dallas Police Department Building for KRLD and CBS News, standing no more than 11 feet from Oswald when he heard Jack Ruby's .38 revolver and saw Oswald fall.

"Having seen Marguerite Oswald's son murdered before my eyes, I dreaded intruding upon his mother's grief," Huffaker wrote. "But she turned out to be aggressive and full of tough rhetoric and I found myself feeling little sympathy... I hung up the phone shaking my head at Marguerite Oswald's dizzying logic. Her coldness struck me. She seemed without grief, filled instead with outrage—icy, edgy, and spoiling to argue."

Under the watch of the Secret Service, the grieving widow and her children stayed with Marguerite at the Inn of the Six Flags Motel outside Dallas. Marina was stunned by Marguerite’s aggressive publicity seeking and despised her incessant focus on money. "She has a mania: money, money, money," Marina told the Warren Commission several months later. And more: "There were some violent scenes. She didn't want to listen to anyone. There were hysterics. Everyone was guilty of everything and no one understood her. Perhaps my opinion is wrong, but at least I do not want to live with her and listen to scandals every day."

John Pic, Lee’s half-brother, took a particularly cynical view toward his mother's behavior after the assassination. "It is my own opinion that she is out right now to make as much money as she can on her relationship with Lee Harvey Oswald," he told the Warren Commission. "That is the only thing—I don't really believe she really believes he is innocent. I think she is out to make money than if she has to say he is guilty. I think she is a phony in the whole deal."

With several months to reflect after the President's assassination and her husband's death, Marina's views had hardened. "I do not think that she is a very sound thinking woman, and I think that part of the guilt is hers," she told the Warren Commission. "I do not accuse her, but I think that part of the guilt in connection with what happened with Lee lies with her because he did not perhaps receive the education he should have during his childhood, and he did not have any correct leadership on her part—guidance. If she were in contact with my children now—I do not want her to cripple them."

Marina kept to her word—after the days surrounding the assassination, neither June nor Rachel was ever allowed to see their grandmother again.

But the unmovable Marguerite remained unapologetic. As she told the Warren Commission during her three days of combative testimony, "It is no crime to sell the pictures. I have no job or income. If I want to sell a picture to a magazine or a newspaper and protect myself financially, I am going to continue to do that."

More than a year after the death of her son, Marguerite was still full of self-pity and anger, concocting new schemes to investigate her son's life—she told everyone he was a government agent despite a lack of evidence—and raise money. She no longer had reason to doubt her grandiose visions, her place in history. She was the aggrieved.

Now and then, she would receive calls from television or newspaper reporters seeking to interview the mother of the assassin, the self-described "mother in history." When money ran low, she sold a letter or document connected to Oswald or an article of his clothing. Sometimes she could be found on Dealey Plaza, selling autographed business cards to tourists for five dollars: Marguerite Oswald, mother of Lee Harvey Oswald.

"I am the strongest person in this tragedy because I have lost everything," she told one journalist who came knocking a decade after the assassination. "I have nothing and I survive."

There was no expression of remorse, no regret, only an unceasing drive to carry on, fight on, despite the abandonment of her family and friends. Her combative attitude never wavered. “I know some who wouldn’t hesitate to try to make a mental case out of me,” she told interviewer Jean Stafford. “Believe me, if anybody’s in their right mind, it’s Mrs. Margeurite Oswald.”

After her death from cancer on January 17, 1981, Marguerite Claverie Oswald was laid to rest in the Rose Hill Cemetery. Her grave was next to her son Lee.

This was adapted from “The Gunman and His Mother: Lee Harvey Oswald, Marguerite Oswald, and The Making of an Assassin” by Steven Beschloss. His writing has been published by The New Yorker, The New York Times, The New Republic and many others. 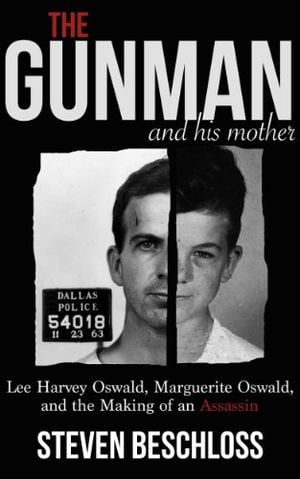 The Gunman and His Mother: Lee Harvey Oswald, Marguerite Oswald, and the Making of an Assassin (Kindle Single)