The image is arresting: a young woman in three-quarter profile, creamy skin, Mona Lisa smile, calm dark eyes. She is perhaps 20. She wears her hair upswept with a cloud of curly fringe, a smart, black-ribbon choker under a lacy, white collar. It’s easy to imagine a story for her, a variation on Jo March or Lizzie Bennet: irrepressible intelligence transcending 19th-century constraints.

If you Google “Elizabeth Blackwell”—the first woman in America to receive a medical degree, in 1849—this image comes up every time. It accompanies articles for Women’s History Month, it illustrates websites dedicated to Blackwell’s achievements, it appears on the cover of at least one biography. It makes a better visual than other surviving Blackwell photographs, all of which capture her later in life, less dewy, more dowager.

It’s a lovely photograph, but it’s not Elizabeth Blackwell.

The original is in the archives of the Museum of the City of New York, catalogued as “possibly Elizabeth Blackwell.” It’s a cabinet card, an albumen print on a postcard-sized rectangle of ivory stock. Flip it over, and there’s a flamboyantly curlicued studio advertisement on the back: “Dana’s Photo-portrait Gallery.” Edward C. Dana, a young photographer on the rise, opened his Sixth Avenue establishment circa 1885. In 1885, Elizabeth Blackwell was 64 years old. The woman in the photo is likely one of her nieces.

Heroines—far more than heroes—are often supposed to look and feel a certain way: pert and peppy but also elegant and effortless, girl-next-door and goddess in one, full of moxie but never shrill. And they’re supposed to be youthful. Old women are witches—they may embody powerful wisdom, but they are never at the center of the story. They’re the ones our heroine consults on the way to her destiny. They don’t come along on the quest.

I only became aware of Elizabeth Blackwell, first woman doctor, and her sister Emily Blackwell, third woman doctor, when I was 44 years old, this despite the fact that I had lived since birth in the city where they practiced, grown up at a proudly feminist girls’ school, and graduated with the intention of pursuing medicine. When I began to investigate the Blackwells in earnest, I found them most often in the children’s biography section: Elizabeth, bright and pretty and triumphant; Emily mentioned only in a subordinate clause.

Moving past the pen-and-ink illustrations of slender ladies with anachronistically modern stethoscopes, I came to know two prickly, complicated women bound together by blood and idealism, not always comfortably. Having wrestled medical degrees from an appalled male establishment, the Blackwell sisters went on to found the New York Infirmary for Indigent Women and Children—the first hospital staffed entirely by women—and then added a Women’s Medical College that was more rigorous and progressive in its curriculum than the medical schools they had attended. Their mission was the promotion of female medical education, but they held divergent views on what it meant to be a woman doctor. Elizabeth used the pen and the lectern more than the contents of her medical bag, seeing her role as a teacher armed with science. Emily was the true practitioner: an obstetrician, gynecologist, surgeon and professor as skilled as any man.

The Blackwells did not apologize for their opinions even if the world disagreed with them, even if they disagreed with each other. They had hungry minds and wasted little energy wondering if people liked them. They reminded me of my most formidable teachers, the razor-sharp, slightly scary ones we held in awe. 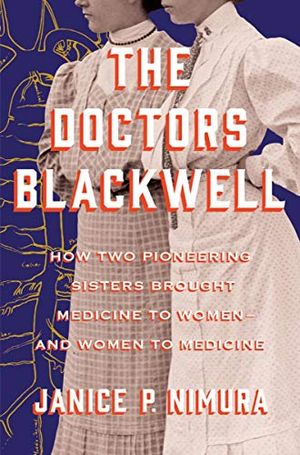 The Doctors Blackwell: How Two Pioneering Sisters Brought Medicine to Women and Women to Medicine

From Bristol, Paris, and Edinburgh to the rising cities of antebellum America, this richly researched new biography celebrates two complicated pioneers who exploded the limits of possibility for women in medicine.

Elizabeth, born 200 years ago this year, was dominant, sublimely confident, startlingly judgmental. An actual portrait taken in her 30s shows her with sunken cheeks and lips compressed in a straight line, her expression and her tailoring equally severe. A close look reveals a subtle asymmetry in her gaze. At the age of 28, while pursuing post-graduate training at a public maternity hospital in Paris, she contracted gonorrheal ophthalmia from an infected patient and lost one eye. She wore a glass prosthetic for the rest of her life.

She chose medicine not because caring for patients was lucrative or particularly satisfying for her, but rather to prove that a woman’s potential was limited only by talent and toil. She proudly announced the establishment of her practice in New York in an era when most people understood “female physician” to mean abortionist, operating in the shadows and in sin. (Elizabeth condemned both abortion and the women who sought it.) She had no objection to fame, but a horror of notoriety; having fought to win the respect of men, she was wary of her own sex. “Oh Milly, what is to be done with the women,” she wrote to her sister. “There are a few strong ones—a sort of exceptional eighth perhaps. If they could be united, it would be a good beginning.” She counted herself and her sister among the exceptional and dismissed most of the rest—even those at the forefront of the emerging women’s movement, whose goal of suffrage she thought perverse. What good was a vote when a woman had not yet liberated her opinions from the control of her menfolk?

Elizabeth recognized Emily (“Milly”) as the most intellectually intrepid of her four sisters and anointed her as follower, colleague, and confidante. Emily—five years younger, understated and pragmatic, vulnerable to doubt but strong enough to push past it—considered her options and accepted the challenge. She was taller and more robust than her sister, just as brilliant but less rigid, eternally in the shadow of Elizabeth’s pioneering fame even while leading and sustaining the institutions they had founded together. Where Elizabeth strove to prove herself as an exceptional woman, Emily yearned to shuck off her gender and make her way in anonymity. “I have often thought that if I followed solely my inclinations I should assume a man’s dress and wander freely over the world,” she wrote. Like Elizabeth, she was not a natural caregiver, though where Elizabeth embraced medicine for ideological reasons, Emily loved the science itself.

The same modern commentators who persist in seeing Elizabeth as a more attractive younger woman tend not to see Emily at all; her portrait shows up in archives and articles chronically mislabeled as Elizabeth. It’s true the sisters resembled each other, but they’re not impossible to tell apart. Emily’s jaw and brow are squarer, Elizabeth’s cheekbones and chin more pronounced. Elizabeth invariably wore a stern expression for the camera; Emily’s gaze is more benign. And then of course there are Elizabeth’s eyes. We do so much looking at women—at their hair, their clothes, their curves—and too often fail to see them.

Even in their own time, Elizabeth and Emily Blackwell often went unseen. They shone as beacons, but with a chilly light; few people drew close enough to know them intimately. It’s no accident that their story is easiest to find in the kids’ section, where their abrasive edges and questionable biases are smoothed away, where they can remain uncomplicated and inspiring—like the alluring young woman in that first photograph.

I started work on the Blackwell story nearly five years ago, in the sunlit confidence that we were about to elect our first female president. As heartening as it is to see Kamala Harris as Vice-President-elect, Americans have yet to vote for a woman as Commander in Chief—which makes the Blackwell sisters even more important. They may not conform to the prevailing image of heroine, but their impact has nothing to do with how they looked. It’s time to put the tough, seasoned, accomplished women at the center of the story, and follow where they lead.