It is a good thing that Louis Zamperini was a runner. And not just any runner, but a 4-minute miler and an eighth place finisher in the 5,000-meter event at the 1936 Olympics in Berlin. Because the endurance the bombadier needed in order to make it home from the Pacific theater was unfathomable.

On May 27, 1943, Zamperini and ten crewmates were searching for a downed aircraft south of Hawaii when they themselves crashed. Two of the engines in their plane, a beat-up B-24 called Green Hornet, had failed. Miraculously, Russell Phillips, the pilot; Zamperini, the co-pilot; and Francis McNamara, the tail gunner survived. The three drifted on rafts, living on albatrosses they killed and feeling sharks rubbing just underneath them. McNamara died on the 33rd day at sea, but, on day 47, Zamperini and Phillips were found and captured in the Marshall Islands, some 2,000 miles from the crash site, by the Japanese. They were taken as prisoners of war and were tortured in a string of camps until being freed at the end of the war.

Zamperini went on to live a long life. His story was told in Laura Hillenbrand's 2010 bestseller Unbroken, and the 97-year-old passed away this July at his home in Los Angeles, before he could see Unbroken, the major motion picture directed and produced by Angelina Jolie that is opening nationwide this week.

The National Archives has in its collection the Missing Air Crew Report detailing the disappearance of the Green Hornet. I recently interviewed Eric Van Slander, an archivist who specializes in World War II era records at the National Archives II facility in College Park, Maryland, about the record. Click on the highlighted portions of the document to learn more. 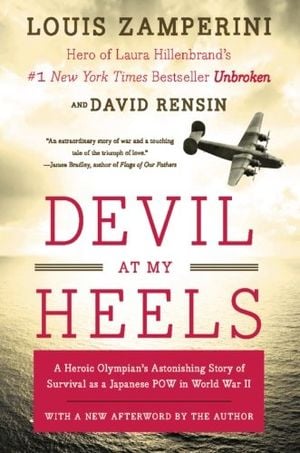 Devil at My Heels: A Heroic Olympian's Astonishing Story of Survival as a Japanese POW in World War II