The True History Behind the ‘1917’ Movie

A story shared by director Sam Mendes’ grandfather, a veteran of the Western Front, inspired the new World War I film 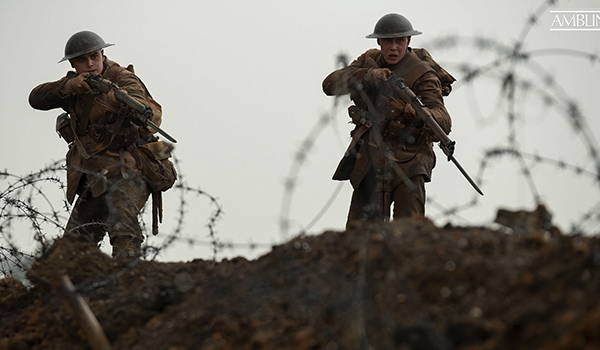 The new World War I drama from director Sam Mendes, 1917, unfolds in real-time, tracking a pair of British soldiers as they cross the Western Front on a desperate rescue mission. Seemingly filmed in one continuous take, the 117-minute epic has garnered accolades for its cinematography and innovative approach to a potentially formulaic genre.

Although the movie’s plot is evocative of Saving Private Ryan—both follow soldiers sent on “long journeys through perilous, death-strewn landscapes,” writes Todd McCarthy for the Hollywood Reporter—its tone is closer to Dunkirk, which also relied on a non-linear narrative structure to build a sense of urgency.

“[The film] bears witness to the staggering destruction wrought by the war, and yet it is a fundamentally human story about two young and inexperienced soldiers racing against the clock,” Mendes tells Vanity Fair’s Anthony Breznican. “So it adheres more to the form of a thriller than a conventional war movie.”

Plot-wise, 1917 follows two fictional British lance corporals tasked with stopping a battalion of some 1,600 men from walking into a German ambush. One of the men, Blake (Dean Charles Chapman, best known for playing Tommen Baratheon in “Game of Thrones”), has a personal stake in the mission: His older brother, a lieutenant portrayed by fellow “Game of Thrones” alumnus Richard Madden, is among the soldiers slated to fall victim to the German trap.

“If you fail,” a general warns in the movie’s trailer, “it will be a massacre.”

While Blake and his brother-in-arms Schofield (George McKay) are imaginary, Mendes grounded his war story in truth. From the stark realities of trench warfare to the conflict’s effect on civilians and the state of the war in spring 1917, here’s what you need to know to separate fact from fiction ahead of the movie’s opening on Christmas Day.

In short: Yes, but with extensive dramatic license, particularly in terms of the characters and the specific mission at the heart of the film.

As Mendes explained earlier this year, he drew inspiration from a tale shared by his paternal grandfather, author and World War I veteran Alfred Mendes. In an interview with Variety, Mendes said he had a faint memory from childhood of his grandfather telling a story about “a messenger who has a message to carry.”

The director added, “And that’s all I can say. It lodged with me as a child, this story or this fragment, and obviously I’ve enlarged it and changed it significantly.”

What events does 1917 dramatize?

Set in northern France around spring 1917, the film takes place during what Doran Cart, senior curator at the National WWI Museum and Memorial, describes as a “very fluid” period of the war. Although the Allied and Central Powers were, ironically, stuck in a stalemate on the Western Front, engaging in brutal trench warfare without making substantive gains, the conflict was on the brink of changing course. In Eastern Europe, meanwhile, rumblings of revolution set the stage for Russia’s impending withdrawal from the conflict. Back in Germany, Kaiser Wilhelm II resumed unrestricted submarine warfare—a decision that spurred the United States to join the fight in April 1917—and engaged in acts of total war, including bombing raids against civilian targets.

Along the Western Front, between February and April 1917, the Germans consolidated their forces by pulling their forces back to the Hindenburg Line, a “newly built and massively fortified” defensive network, according to Mendes.

Germany’s withdrawal was a strategic decision, not an explicit retreat, says Cart. Instead, he adds, “They were consolidating their forces in preparation for potential further offensive operations”—most prominently, Operation Michael, a spring 1918 campaign that found the Germans breaking through British lines and advancing “farther to the west than they had been almost since 1914.” (The Allies, meanwhile, only broke through the Hindenburg Line on September 29, 1918.)

Mendes focuses his film around the ensuing confusion of what seemed to the British to be a German retreat. Operating under the mistaken assumption that the enemy is fleeing and therefore at a disadvantage, the fictional Colonel MacKenzie (Benedict Cumberbatch) prepares to lead his regiment in pursuit of the scattered German forces.

“There was a period of terrified uncertainty—had [the Germans] surrendered, withdrawn, or were they lying in wait?,” the director said to Vanity Fair.

In truth, according to Cart, the Germans “never said they were retreating.” Rather, “They were simply moving to a better defensive position,” shortening the front by 25 miles and freeing 13 divisions for reassignment. Much of the preparation for the withdrawal took place under cover of darkness, preventing the Allies from fully grasping their enemy’s plan and allowing the Germans to move their troops largely unhindered. British and French forces surprised by the shift found themselves facing a desolate landscape of destruction dotted with booby traps and snipers; amid great uncertainty, they moved forward cautiously.

In the movie, aerial reconnaissance provides 1917’s commanding officer, the similarly fictional General Erinmore (Colin Firth), with enough information to send Blake and Schofield to stop MacKenzie’s regiment from walking into immense danger. (Telegraph cables and telephones were used to communicate during World War I, but heavy artillery bombardment meant lines were often down, as is the case in the movie.)

To reach the at-risk battalion, the young soldiers must cross No Man’s Land and navigate the enemy’s ostensibly abandoned trenches. Surrounded by devastation, the two face obstacles left by the retreating German forces, who razed everything in their path during the exodus to the newly constructed line.

Dubbed Operation Alberich, this policy of systematic obliteration found the Germans destroying “anything the Allies might find useful, from electric cables and water pipe[s] to roads, bridges and entire villages,” according to the International Encyclopedia of the First World War. Per the Times, the Germans evacuated as many as 125,000 civilians, sending those able to work to occupied France and Belgium but leaving the elderly, women and children behind to fend for themselves with limited rations. (Schofield encounters one of these abandoned individuals, a young woman caring for an orphaned child, and shares a tender, humanizing moment with her.)

“On the one hand it was desirable not to make a present to the enemy of too much fresh strength in the form of recruits and laborers,” German General Erich Ludendorff later wrote, “and on the other we wanted to foist on him as many mouths to feed as possible.”

The events of 1917 take place prior to the Battle of Poelcappelle, a smaller skirmish in the larger Battle of Passchendaele, or the Third Battle of Ypres, but were heavily inspired by the campaign, which counted Alfred Mendes among its combatants. This major Allied offensive took place between July and November 1917 and ended with some 500,000 soldiers wounded, killed or missing in action. Although the Allies eventually managed to capture the village that gave the battle its name, the clash failed to produce a substantial breakthrough or change in momentum on the Western Front. Passchendaele, according to Cart, was a typical example of the “give-and-take and not a whole lot gained” mode of combat undertaken during the infamous war of attrition.

Who was Alfred Mendes?

Born to Portuguese immigrants living on the Caribbean island of Trinidad in 1897, Alfred Mendes enlisted in the British Army at age 19. He spent two years fighting on the Western Front with the 1st Battalion Rifle Brigade but was sent home after inhaling poisonous gas in May 1918. Later in life, Alfred won recognition as a novelist and short story writer; his autobiography, written in the 1970s, was published posthumously in 2002.

The “story of a messenger” recalled by the younger Mendes echoes the account of the Battle of Poelcappelle told in his grandfather’s autobiography. On the morning of October 12, 1917, Alfred’s company commander received a message from battalion headquarters. “Should the enemy counter-attack, go forward to meet him with fixed bayonets,” the dispatch read. “Report on four companies urgently needed.” Despite the fact that he had little relevant experience aside from a single signaling course, Alfred volunteered to track down A, B and D Companies, all of which had lost contact with his own C Company. Aware of the high likelihood that he would never return, Alfred ventured out into the expanse of No Man’s Land.

“The snipers got wind of me and their individual bullets were soon seeking me out,” wrote Alfred, “until I came to the comforting conclusion that they were so nonplussed at seeing a lone man wandering in circles about No Man’s Land, as must at times have been the case, that they decided, out of perhaps a secret admiration for my nonchalance, to dispatch their bullets safely out of my way.”

Or, he theorized, they may have “thought me plain crazy.”

Alfred managed to locate all three missing companies. He spent two days carrying messages back and forth before returning to C Company’s shell hole “without a scratch, but certainly with a series of hair-raising experiences that would keep my grand- and great-grandchildren enthralled for nights on end.”

How does 1917 reflect the harsh realities of the Western Front?

These descriptions mirror those shared by the men who actually fought in World War I—including Alfred Mendes. Remembering his time in the Ypres Salient, where the Battle of Passchendaele (among others) took place, Alfred deemed the area “a marsh of mud and a killer of men.” Seeping groundwater exacerbated by unusually heavy rainfall made it difficult for the Allies to construct proper trenches, so soldiers sought shelter in waterlogged shell holes.

“It was a case of taking them or leaving them,” said Alfred, “and leaving them meant a form of suicide.”

According to Cart, leaving one’s trench, dugout or line was a risky endeavor: “It was pretty much instant death,” he explains, citing the threat posed by artillery barrages, snipers, booby traps, poison gas and trip wires.

Blake and Schofield face many of these dangers, as well as more unexpected ones. The toll exacted by the conflict isn’t simply told through the duo’s encounters with the enemy; instead, it is written into the very fabric of the movie’s landscape, from the carcasses of livestock and cattle caught in the war’s crosshairs to rolling hills “comprised of dirt and corpses” and countryside dotted with bombed villages. 1917’s goal, says producer Pippa Harris in a behind-the-scenes featurette, is “to make you feel that you are in the trenches with these characters.”

The kind of individualized military action at the center of 1917 was “not the norm,” according to Cart, but “more of the exception,” in large part because of the risk associated with such small-scale missions. Trench networks were incredibly complex, encompassing separate frontline, secondary support, communication, food and latrine trenches. They required a “very specific means of moving around and communicating,” limiting opportunities to cross lines and venture into No Man’s Land at will.

Still, Cart doesn’t completely rule out the possibility that a mission comparable to Blake and Schofield’s occurred during the war. He explains, “It’s really hard to say … what kind of individual actions occurred without really looking at the circumstances that the personnel might have been in.”

As Mendes bemoans to Time, World War II commands “a bigger cultural shadow” than its predecessor—a trend apparent in the abundance of Hollywood hits focused on the conflict, including this year’s Midway, the HBO miniseries “Band of Brothers” and the Steven Spielberg classic Saving Private Ryan. The so-called “Great War,” meanwhile, is perhaps best immortalized in All Quiet on the Western Front, an adaptation of the German novel of the same name released 90 years ago.

1917 strives to elevate World War I cinema to a previously unseen level of visibility. And if critics’ reviews are any indication, the film has more than fulfilled this goal, wowing audiences with both its stunning visuals and portrayal of an oft-overlooked chapter of military lore.

“The First World War starts with literally horses and carriages, and ends with tanks,” says Mendes. “So it’s the moment where, you could argue, modern war begins.”