These Artworks Reimagine the Legacy of the African Diaspora

A new exhibition at the National Gallery of Art in Washington, D.C. showcases 130 works by artists from 24 countries A mirrored map showing North America attached to Africa instead of South America welcomes visitors to the National Gallery of Art’s (NGA) newest exhibition, “Afro-Atlantic Histories.” Created by Hank Willis Thomas, the 2020 artwork—titled A Place to Call Home (African American Reflection)—testifies to the “feelings of connection and detachment that many African Americans have toward Africa,” notes the NGA in a statement. Looking at oneself in the artwork’s reflective surface allows viewers to stake their position in the historical and contemporary racial narratives of the United States.

“[A] mythical connection to Africa is embedded in your identity, but many people go to Africa looking for home and don’t find it because our roots are so diluted there,” says Thomas in the statement. “They also never felt at home in the U.S., where they were born. I wanted to make a place where African Americans come from.”

Thomas’ map is one of more than 130 artworks and documents featured in the Washington, D.C. exhibition, which explores the impact of the African diaspora in Africa, the Americas, the Caribbean and Europe between the 17th and 21st centuries. Broadly defined as the mass dispersion of peoples from Africa, often through forced migration under the transatlantic slave trade, the diaspora has a rich cultural legacy, with diasporic art expressing Blackness in disparate places across the Atlantic.

First exhibited at the Museu de Arte de São Paulo (MASP) in Brazil in 2018, “Historias Afro-Atlanticas,” as the show was called then, explored the Portuguese word histórias, which “can encompass both fictional and non-fictional narratives of cultural, economic, personal or political character,” according to 2021 NGA statement. “The term is plural, diverse and inclusive, presenting viewpoints that have been marginalized or forgotten.”

Like its original iteration, “Afro-Atlantic Histories” argues that multiple histories are at play at any given time—a view that has become increasingly mainstream in recent decades. Though every society has a widely accepted history, alternative narratives omitted from the history books also exist. Some survive through oral traditions, while others are siloed in the communities that experienced them.

“We [have started to] understand history differently in the past 40 or 50 years,” says Molly Donovan, curator of contemporary art at the NGA. “We’re working in different ways to tell histories. It enables us to tell better stories.”

Dismantling the notion that the U.S. was the world’s leading proponent of slavery is a key goal of the exhibition, says Donovan. In truth, of the roughly 10.7 million enslaved Africans who survived the journey to the Americas between 1525 and 1866, around four million (almost 40 percent) ended up in Brazil. Comparatively, some 388,000—about 4 percent—were enslaved in North America.

“It’s about reorienting the viewer, and in order to reorient the viewer one has to, as a curator, orient their own stance and one’s own understanding,” says Donovan.

By exploring the many narratives of the African diaspora, the exhibition encourages visitors to notice the similarities between diasporic communities around the world. Though these people might not share the same language, they have a central experience in common: Under the institution of slavery, they were forced to develop new cultures that blended remembered traditions of their homelands with life in the New World.

“Afro-Atlantic Histories” is split into six thematic sections, including Maps and Margins, Everyday Lives, and Resistances and Activism. In Rites and Rhythms, works such as Pedro Figari’s depictions of Uruguayan Candombe dances and Jaime Colson’s Merengue (1938) document the religious and spiritual practices of Haiti, Brazil, the Dominican Republic, Jamaica, the U.S. and other countries. The diaspora’s multicultural bent is evident in the show’s discussion of Vodou, Umbanda and Candombe, all of which are based on the West African Yoruba religion. As the exhibition notes, many enslaved people practiced Christianity in plain sight but continued following African religious traditions in private. Some worshipped Catholic saints as African deities.

Writing in 2005, scholar John Peffer described African art history as “associated more with a dual sense of place.” The art of the African diaspora reflects the cultures and lived experiences of people estranged from their native land, surviving through faith in the lands where they were enslaved. According to Peffer, diasporas “often represent a historic and traumatic migration, or series of migrations, into the lands of another, which later coalesce into communities self-defined in resistant relation to the host country.”

Through the exhibition, visitors see how the traumatic experience of slavery fostered similar experiences throughout the U.S., the Caribbean and Brazil. Forbidden to live as they would have in Africa, enslaved Africans demonstrated resilience by developing new religions and cultural practices.

Another section of the exhibition, Enslavements and Emancipations, examines how the brutal reality of slavery sparked rebellions and abolitionist movements. It includes diagrams of ships where enslaved Africans were packed below deck in unsanitary conditions on the two-month voyage across the Middle Passage. Approximately 1.8 million people died on this journey; oftentimes, the dead and the dying remained chained to the living until their bodies were thrown overboard.

Restraint, a 2009 etching by artist Kara Walker, similarly speaks to the horrors of slavery. The artwork shows a silhouette of a head, rendered in Walker’s stark signature style, wearing a contraption designed to prevent speaking, swallowing or lying down. Based on an actual torture device, the bridle is outfitted with bells that would have alerted slaveholders to any movement.

The exhibition contains both difficult moments and much beauty. Douglas’ Into Bondage, for instance, embodies the suffering and resilience that often go hand in hand in “Afro-Atlantic Histories.” The 1936 painting depicts men in chains, heading to ships sailing from Africa to the New World. A sense of hope pervades the scene, in which a solitary figure gazes up at a star—perhaps the same one that guided so many enslaved people to freedom.

The Portraits section, meanwhile, celebrates the Black body. A highlight is Barkley Leonnard Hendricks’ George Jules Taylor, an enormous 1972 portrait of a stylishly dressed Black man. The work is intimidating for its size as well as its mastery, with the confident subject’s pose testifying to the spirit of African American people in the face of oppression. Other featured works include self-portraits, which co-curator Kanitra Fletcher describes in the exhibition catalog as a way for Black artists to “configure new roles and ways of understanding their own lives and histories.”

“One can never perceive or portray oneself fully and must objectify the self to render it as an artwork,” Fletcher writes. “In the perception of oneself as something necessarily ‘other,’ however, the artist gains distance and, by extension, freedom to imagine who she is or could be.”

Unlike many other exhibitions centered on African diasporic art, “Afro-Atlantic Histories” moves away from African American culture as the standard. Smaller than its Brazilian counterpart, which featured 450 works by 214 artists, the D.C. exhibition nevertheless offers a new approach to global history—one that contradicts the myth of a singular narrative in favor of multiple. “It’s ... a new world history framework that approaches it not from within national boundaries, which is very much how historiography of Western civilization has been told,” says Donovan. Through the exhibition, we see the people, from the enslaved to the royal, who literally built world cultures on their backs through sweat and toil.

“Afro-Atlantic Histories” is on view at the National Gallery of Art in Washington, D.C. through July 17, 2022. 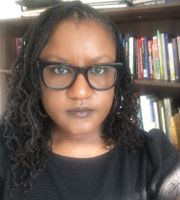