One day last March, Bridget Flynn, a school librarian who lives in Philadelphia, was searching for an old family drawing to print on the invitations to her daughter Rebecca’s bridal shower. As she and Rebecca rummaged through the several generations of family artifacts—letters, photographs, an envelope of hair cuttings—she keeps in plastic bins in her basement, they found a stack of small envelopes tied together with a black shoelace.

Rebecca untied them and began reading the first one:

“Mr Ros, be not uneasy, you son charley bruster be all writ we is got him and no powers on earth can deliver out of our hand.”

Flynn went through the rest of the stack with her husband, David Meketon, a research consultant at the University of Pennsylvania.  They counted a total of 22 letters, all of them addressed to Christian Ross. Kidnappers had taken his 4-year-old son, whose full name was Charles Brewster Ross, and demanded $20,000 for his return.

Meketon googled “Christian Ross” and found that in 1876, Ross published a memoir about the kidnapping. The memoir, available online, includes facsimiles of several of the letters.  As he compared the handwriting in the images to the documents that lay before him, Meketon realized he held America’s first known ransom kidnapping notes.

The letters represented a direct link to a disappearance that had remained unsolved for 139 years. The question was how they had ended up in his basement—and where they might lead.

On July 1, 1874, two Ross sons were taken from their family’s front lawn in Germantown, a northwest Philadelphia neighborhood. The kidnappers released Walter, age 5, for reasons unclear. When Charley failed to return home by nightfall, Christian Ross, a dry-goods merchant, feared the worst. But he struggled to get police help—Philadelphia’s force, only about 30 years old, had no precedent for investigating a kidnapping. At central police headquarters, inside Independence Hall, officers told Ross that drunks probably had taken Charley and would return him once they had sobered up. Three days later, the first ransom letter arrived at Ross’ store in downtown Philadelphia.

Somebody had written the message—ridden with errors in spelling, capitalization and punctuation—in black ink and an unsteady hand. “You wil have to pay us before you git him from us, and pay us a big cent to,” the note read.  “if you put the cops hunting for him you is only defeeting yu own end.” 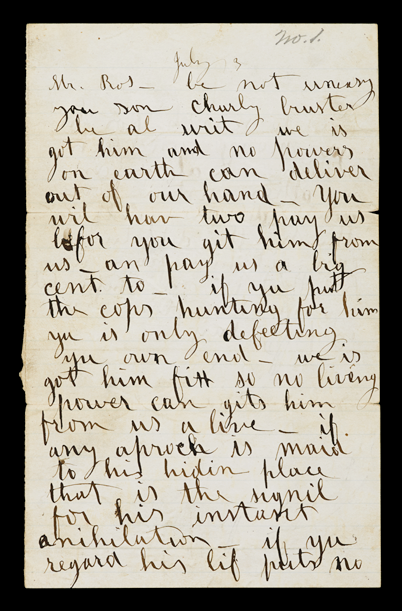 “You wil have to pay us before you git him from us, and pay us a big cent to,” the note reads. “if you put the cops hunting for him you is only defeegin yu own end.” Credit: Freeman's Auctioneers and Appraisers

With this demand, the letter writers recorded the first ransom kidnapping in U.S. history. They told Christian Ross to correspond with them through the personal advertisements of the Philadelphia Public Ledger.

Ross showed the letters to the police, who then rushed to make up for lost time. They advised him to refuse payment, for fear it would inspire copycat crimes, and they posted handbills from Philadelphia to Trenton to alert the public to Charley’s disappearance. The press soon learned about the letters, and concerned parents—wanting to know if their children were in similar danger—demanded they be released. The authorities refused to publish them, but on July 24, the mayor’s office announced a $20,000 reward for information leading to the kidnappers. Telegraphs spread word of the reward throughout the country—and unleashed chaos.

As the country struggled through Reconstruction, Americans united in a national manhunt for a common enemy. But the search also brought out con artists, do-gooders and conspiracy theorists who jumped at the chance to say they had information about Charley Ross. Private detectives competed with police, spiritualists offered their services and parents dressed up their children—boys and girls of every age—in the hope that they could pass as Charley and capture the reward money. In early August, the chief of the Philadelphia police led a search of every building in the city.

By then, the New York police had received a lead. Gil Mosher, a seasoned criminal greedy for the reward, told Superintendent George Walling that his brother William and a friend named Joseph Douglas fit the kidnappers’ descriptions as reported by Walter Ross and witnesses who had seen the men near the boys.  Walling also learned that William Mosher’s brother-in-law was a former NYPD officer named William Westervelt, who had been fired for graft. Walling offered to restore Westervelt’s job if he could contact and spy on his brother-in-law.  Westervelt agreed.  But after contacting the kidnappers through his sister, he began acting as a double agent, informing the kidnappers of police activities.

The New York and Philadelphia police departments searched together for William Mosher and Douglas but did not release their names for fear of public interference. The search lasted five months, during which the kidnappers wrote 23 letters. (Christian Ross’s memoir contains the text of every letter except for one: number 5.  He does not mention why, and this letter is also missing from Bridget Flynn’s discovery). In December 1874, the two suspects died of gunshot wounds after a failed robbery attempt on Long Island. As he lay wounded in front of witnesses, Douglas confessed that he and Mosher had kidnapped Charley Ross—and then died before saying anything more.  After two months of tracking down leads, police turned their attention to William Westervelt.  In the fall of 1875, a Philadelphia jury convicted him of complicity in Charley Ross’s kidnapping.  He maintained his innocence even as he served seven years in Philadelphia’s Eastern State Penitentiary.

Charley Ross never returned home.  During Westervelt’s trial, Christian Ross estimated that more than half a million people had assisted in the search for Charley. He told reporters that those helping him had distributed more than 700,000 fliers and investigated the stories of more than 600 children who resembled his son. Well into the 20th century, men came forward claiming to be Charley Ross, but the Ross family did not accept any of their assertions. Christian and his wife, Sarah, spent the rest of their lives and money looking for their son. They both died of heart failure, Christian died in 1897, at age 73, and Sarah in 1912, at age 79. The five remaining Ross children did not welcome inquiries into Charley’s fate.

After Bridget Flynn found the ransom letters, her husband contacted Alex Bartlett, an archivist at Historic Germantown, the local historical society. Bartlett compared the handwriting in the letters to that in the published facsimiles and said the letters looked authentic. But he wondered about their provenance.

Flynn’s family has lived in northwest Philadelphia since the late 18th century; her house is within walking distance of where her ancestors grew up in Germantown. Flynn knew that her grandmother, “a born storyteller,” was a careful collector who had left behind many family papers. Flynn took custody of them about a decade ago.

The bins sat unexamined in her basement until last March. Along with the letters, Flynn found an original letterpress “Lost” poster imprinted with Charley’s image. Because of this pairing, she wonders if one of her forebears bought the Ross items together as an auction lot. But she still doesn’t know for sure.

Charley’s grandnephew Chris Ross, a nine-term Pennsylvania state representative, says his parents’ generation “didn’t talk about [Charley] much” because the disappearance was “a forbidden subject.”  The family, he says, had no knowledge that any family papers dating back to Christian Ross existed.

James Butler, a professor emeritus of English at La Salle University in Philadelphia and a longtime local historian, has always thought “how very odd” it was that the ransom letters hadn’t surfaced. Their re-emergence now, he says, only “adds to the mystery” surrounding the Ross case. Why, one wonders, would the family ever part ways with their only lifeline to their child?

David Bloom is a vice president and head of the rare-books, maps and manuscript department at Freeman’s Auctioneers and Appraisers, Philadelphia’s oldest auction house. Throughout his 30-year career with Freeman’s, Bloom has seen various pieces of Charley Ross Americana come through its doors: first editions of Christian Ross’ memoir, period reward posters and missing-person flyers. But until David Meketon approached him last spring, he had never heard that the ransom letters might still exist.

Bloom said he listened to Meketon’s description with skepticism but agreed to examine the find because “it seemed promising enough.” When he did so, the paper looked and felt right, as did a quick comparison of the four published facsimiles to their physical counterparts. The handwriting matched, the smudges matched and Bloom found it especially interesting that each letter had a light pencil mark at the top: Someone had numbered them.

Bloom gave the ransom letters an estimate of $3,000 to $5,000 and advised Flynn and Meketon to offer them for sale in November, when Freeman’s put on its annual Pennsylvania Sale.

Historic Germantown received word that a collector was interested in obtaining the letters at auction and lending them to the society. Chris Ross visited the letters at Freeman’s, but “didn’t want to own them” because of a “sadness for all the harm and trouble [they] caused in my family.” Both Ross and the team at Historic Germantown wondered whether bidders would scramble to own a piece of an American first: The letters resulted in not only America’s first recorded ransom kidnapping but also a new state law. In 1875, Pennsylvania became the first state to change the crime of kidnapping from a misdemeanor to a felony.

Freeman’s held its Pennsylvania Sale on November 14.  The Books, Maps & Manuscripts section started at noon and featured the Ross letters, Lot 632, near the end of the sale. The audience had winnowed to about three dozen people.

An online buyer bid first, starting the sale at $1,500. Two bidders then started a war that ended at $16,000. After paying an additional 25 percent premium fee, the winner claimed the letters for $20,000—the same sum (though hardly the same value) that the kidnappers had demanded.

The buyer, who asked to have his name withheld, is the collector with interests in Historic Germantown.  “My main goal [in buying the letters] was for them to remain in northwest Philadelphia,” he said.  Historic Germantown will scan the letters for its digital archive before exhibiting and then storing them in acid-free folders and boxes. Curator Laura Keim says the originals will be accessible to researchers.

James Butler notes that the Charley Ross story illustrates the “indeterminacy of history.” He acknowledges that there must be a logical explanation for how the kidnappers’ letters ended up in a Mount Airy basement. “Something did happen and there is a solution,” he says. “But damned if we are ever going to know what it is.”

Editors' Note: The transcription of the letter originally contained an error, substituting the incorrect "defeegin" for the more accurate "defeeting." It has since been changed.

Carrie Hagen is the author of We Is Got Him: The Kidnapping That Changed America, a 2011 book on the Charley Ross kidnapping.

Carrie Hagen is a writer based in Philadelphia. She is the author of We Is Got Him: The Kidnapping that Changed America, and is writing The Vigilance Committee, the narrative of antebellum Philadelphia's interracial abolitionists.