I was in Paris earlier this year when I was contacted by Smithsonian magazine for an assignment about World War I. Half of my family is from Belgium, so I had learned a bit about the war, but photographing the battlefields gave me the opportunity to dive much deeper.

Although 100 years ago may seem distant now, the war was so significant and severe that it should not be forgotten. How can I use this assignment to refresh our memories?

Before I set out to retrace the Western Front, I asked my parents and my wife about the direct connections that our families had to the war. Although my great-grandfather and my great-uncle fought in the war, they had been hesitant to share their stories, and only 20 years after the 1918 armistice my family was swept up in World War II, and most of the survivor stories weren’t passed down to the next generation.

As I prepared for the trip, I remembered this book of poetry about the First World War that I had found a few years ago in a used bookstore in Washington, D.C.

I wrote some entries from the book in my journal and used the words as inspiration on my travels through Belgium and France.

This poem, underlining the contrasts between nature—in this case a fragile bird—and the horror and gloom of man-made war, inspired me as I documented the remaining traces of the Western Front.

On the front lines, the Western Front ran through France, starting near the Swiss border then cutting west through Belgium to the North Atlantic. At home, I pored over maps and researched information about dozens of locations to decide which sites would have the most meaning and visual impact.

One of the things that stood out to me on my journey was how nature has taken back some of these areas. At first glance, it looks like all is normal on a natural level. There's grass and trees everywhere...

... you'll see what looks like a forest or a field, but on closer inspection you can see that in the foreground are craters from exploded shells and mines.

And then sometimes I’d see a poetic contrast of very old and violent-looking barbed wire with wildflowers growing around it.

I drove through French villages nestled among gently rolling fields of hay. Most of these calm and charming little towns had a small church, a bakery and a few farmhouses.

Then I visited Fleury-devant-Douaumont, the site where a village had been erased by the war. Not one structure remained, only bomb craters. Small plaques marked where there had once been the city hall, the baker and family homes.

The land that was tilled by explosions is now covered with green grass and trees that have grown in the years since the war’s end.

Each village that I visited in France had a monument for the dead, a "Monument aux Morts." Sometimes it was only a tombstone, other times it was a statue of a soldier. The names of those who died in the war are written in stone.

When I stopped to read them, I often found several with the same last name. That always got me—knowing that one family lost both their sons, or uncles or cousins. Many of them were so young—only 17 or 18 when they died. 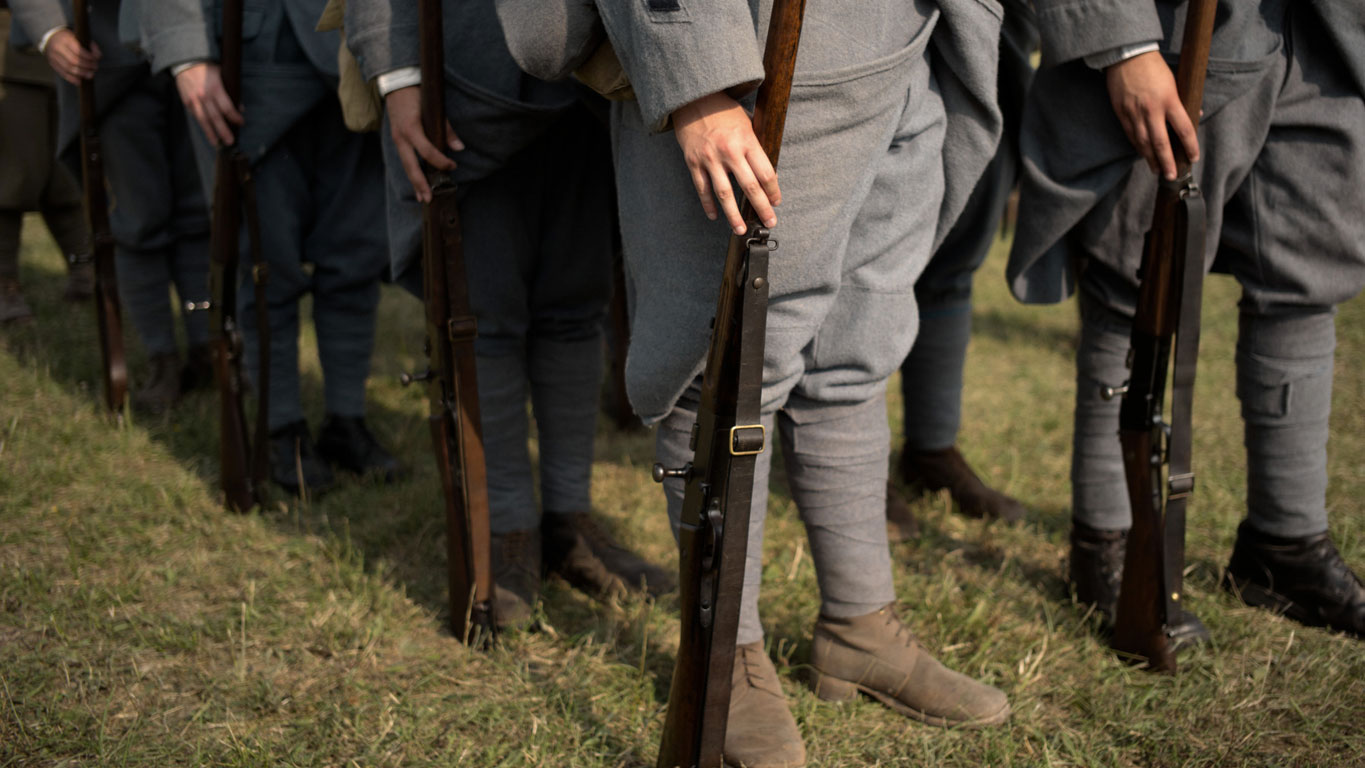 I visited Épernay-Plivot airfield in France, where historical re-enactors dressed as soldiers and nurses from World War I.

When visiting the American cemetery at Meuse-Argonne, what broke my heart was seeing the names of several soldiers who died on November 10, 1918.

The day before the war ended.

At the French National Necropolis at Fleury-devant-Douaumont, the sheer number of dead was numbing to me. How could I wrap my mind around 130,000 dead men at one location? It’s like the entire population of a city.

I learned of the story of the battle near Arras in northern France. Along the front line, thousands of Allied troops tunneled underneath the German positions. They thought the battle would end quickly.

Instead it lasted over a month, and 4,000 men per day died in the fighting. The levels of death were insane, but the front barely shifted as a result.

That was the rule of World War I—an appalling level of bloodshed for very little result. 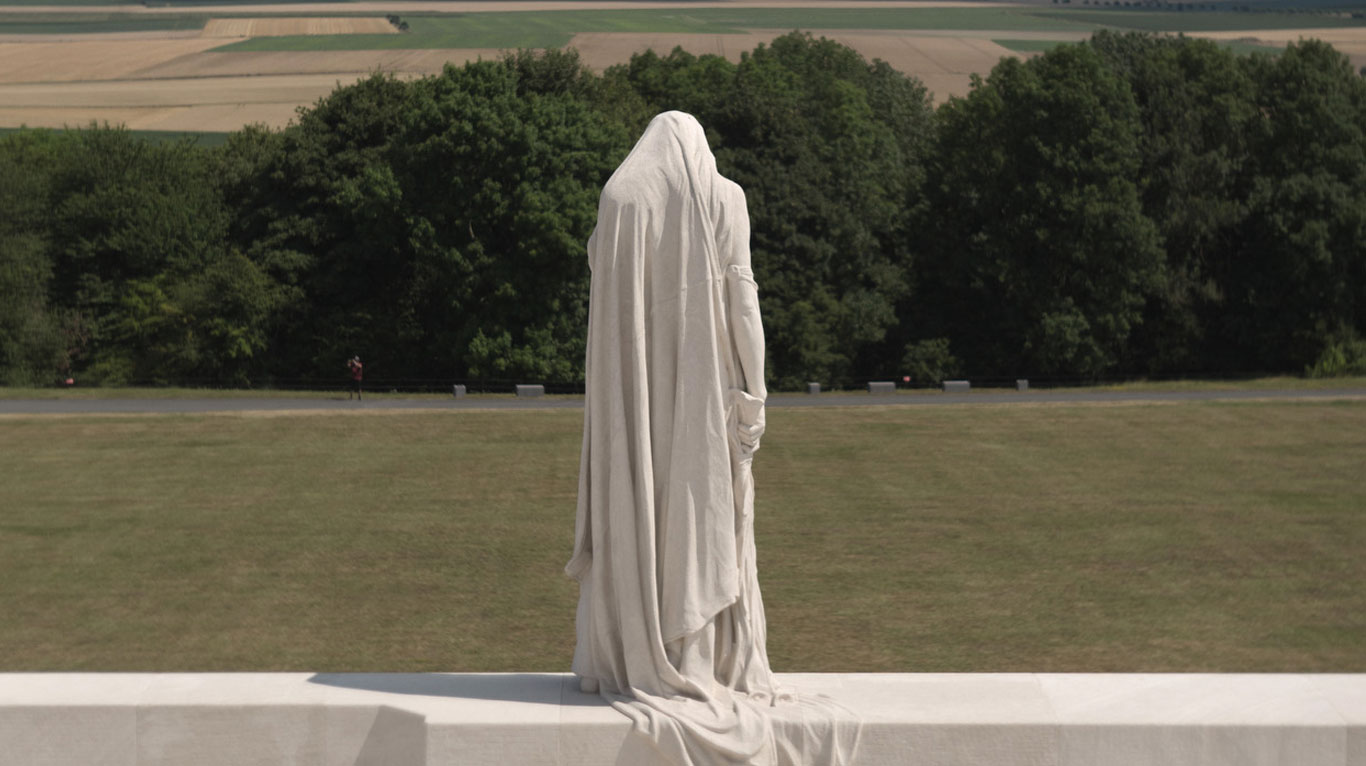 Some of my family fought in the war and survived. As we spoke about the war, my wife, who is French, remembered that she had postcards and photographs from her great-grandfather, Antonin Damoisel.

Here is Antonin, shortly before he served in the war, pictured with his wife, Camille Damoisel.

Written from the front, the postcards date to 1917. In this one, he writes to wish his 12-year-old son, Marcel, a happy birthday.

He sounds fragile and terribly worried that he won’t be there to see his only child grow up. My wife told me that Antonin was exposed to gas during the war, came back in bad health and died shortly after.

Translation of postcard at leftabove

I salute you, Mary, Mother of my childhood.
To my heart, to my arm, give courage.
To everyone I love, give confidence, hope
And let me see them again soon.

Defeat the enemy, lead to glory
Our dear fatherland, give him the victory.
Keep our flag, be it covered with honor.
Holy Virgin Mary, support our ardor.

I love kiss your dear medal,
And like a shield, I put it on my heart.
Then, without fear, I go to the battlefield,
Your image, O Mary, will bring me happiness.
Long live France !

My wife also has a stepfather, and his dad, Joseph Frantz, is still remembered as a war hero in France’s aviation community. In the autumn of 1914, Frantz was the pilot of the first plane in history ever to shoot down an enemy aircraft in flight.

Flying a Voisin III biplane near Reims with his mechanic and gunner Louis Quenault, they shot down a German biplane. Frantz was soon awarded the Legion of Honor, and the French postal service even made stamps commemorating this first aerial dogfight.

Of course, most of those who fought in the war never were memorialized as heroes. Millions of men fought and their names just slipped into obscurity.

On my American side, my great-uncle Albert was drafted into the U.S. Army. My mom said that he came back shell-shocked and refused to talk about his experiences.

On the Belgian side of my family, my great-grandfather Edmond Laureys was a lieutenant colonel during the war in the Belgian Army. Although outmatched by the size and power of the German Army, tiny Belgium managed to defend a small corner of its territory for the duration of the First World War. Between the two wars, Edmond proudly wore his dress uniform and medals to formal events like my grandmother’s wedding. When WWII arrived, the German Army managed to occupy the whole country, and Nazi soldiers were posted inside our family home.

But perhaps the family story that best illustrates the absurd and impersonal scale of the war was that of my great-uncle Louis Serruys. His branch of the family emigrated from Belgium to the United States before the war, and young Louis was motivated to volunteer in the U.S. Army and deploy to Europe to defend his relatives. He fought until Belgian soil was fully liberated, but unfortunately he wasn’t given any leave at the end of the war. He and his unit marched in formation right past his relatives in the streets of Bruges. He was unable to greet them or even wave back. Next he was shipped back to America, disappearing again as just a small part of this huge machinery of war.