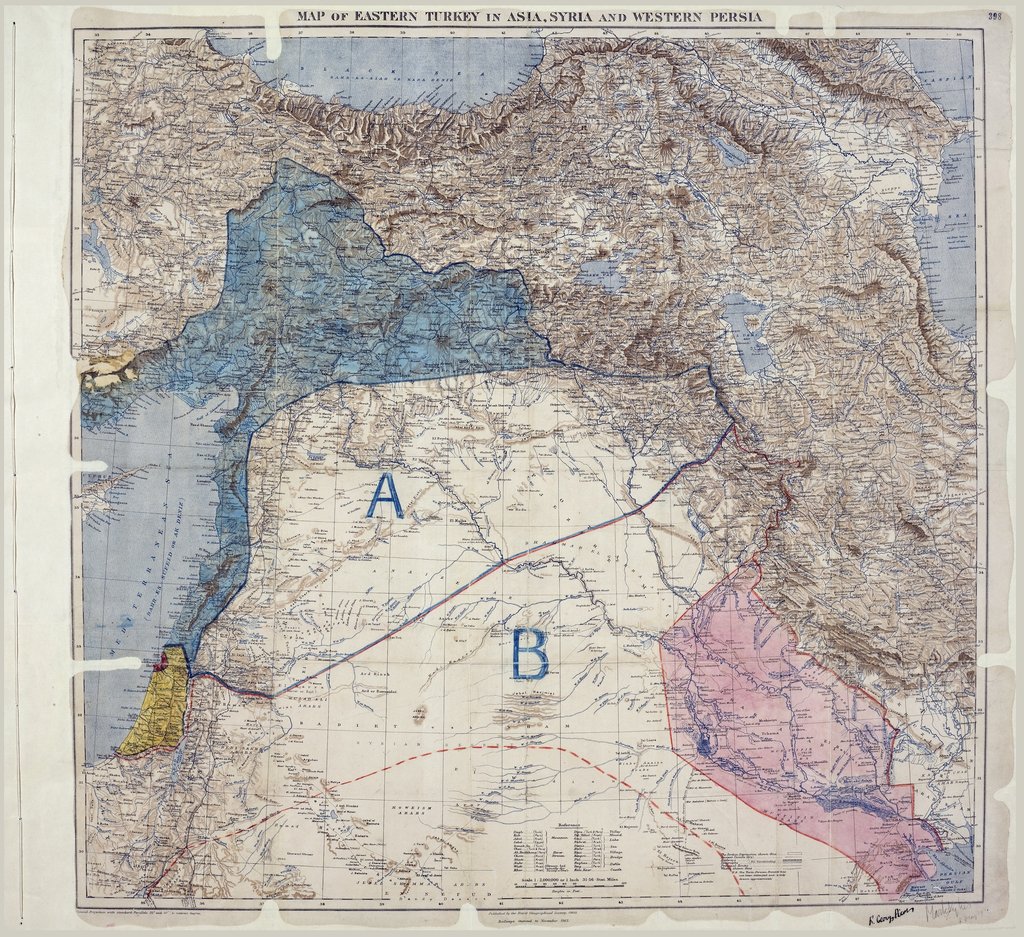 Even before the final outcome of the Great War has been determined, Great Britain, France, and Russia secretly discussed how they would carve up the Middle East into "spheres of influence" once World War I had ended. The Ottoman Empire had been in decline for centuries prior to the war, so the Allied Powers already had given some thought to how they would divide up the considerable spoils in the likely event they defeated the Turks. Britain and France already had some significant interests in the region between the Mediterranean Sea and Persian Gulf, but a victory offered a great deal more. Russia as well hungered for a piece.

From November 1915 to March 1916, representatives of Britain and France negotiated an agreement, with Russia offering its assent. The secret treaty, known as the Sykes–Picot Agreement, was named after its lead negotiators, the aristocrats Sir Mark Sykes of England and François Georges-Picot of France. Its terms were set out in a letter from British foreign secretary Sir Edward Grey to Paul Cambon, France's ambassador to Great Britain, on May 16, 1916.

The color-coded partition map and text provided that Britain ("B") would receive control over the red area, known today as Jordan, southern Iraq and Haifa in Israel; France ("A") would obtain the blue area, which covers modern-day Syria, Lebanon, northern Iraq, Mosul and southeastern Turkey, including Kurdistan; and the brown area of Palestine, excluding Haifa and Acre, would become subject to international administration, "the form of which is to be decided upon after consultation with Russia, and subsequently in consultation with the other allies, and the representatives of [Sayyid Hussein bin Ali, sharif of Mecca]." Besides carving the region into British and French "spheres of influence," the arrangement specified various commercial relations and other understandings between them for the Arab lands.

Russia's change of status, brought on by the revolution and the nation's withdrawal from the war, removed it from inclusion. But when marauding Bolsheviks uncovered documents about the plans in government archives in 1917, the contents of the secret treaty were publicly revealed. The exposé embarrassed the British, since it contradicted their existing claims through T. E. Lawrence that Arabs would receive sovereignty over Arab lands in exchange for supporting the Allies in the war. Indeed, the treaty set aside the establishment of an independent Arab state or confederation of Arab states, contrary to what had previously been promised, giving France and Britain the rights to set boundaries within their spheres of influence, "as they may think fit."

After the war ended as planned, the terms were affirmed by the San Remo Conference of 1920 and ratified by the League of Nations in 1922. Although Sykes-Picot was intended to draw new borders according to sectarian lines, its simple straight lines also failed to take into account the actual tribal and ethnic configurations in a deeply divided region. Sykes-Picot has affected Arab-Western relations to this day.