“Objects talk,” reveals Swiss photographer Henry Leutwyler. “At least, they talk to me.” In his fascinating new photo book, Document, Leutwyler unveils a personal project 12 years in the making.

For over a decade, he’s traveled the world publishing his work in the likes of Vanity Fair, National Geographic and Vogue. Though he’s best known as a celebrity photographer, his photographs in Document showcase a different iteration of his minimalist style. Rather than celebrities, the pages of this book are filled with interesting objects owned by intriguing people from history, pop culture, the arts, and sports. The result is an encompassing and unconventional collection of images ranging from Mohandas Gandhi’s wire-frame spectacles to Bob Marley’s charred-black first guitar to Julia Child’s madeleine baking tray. Seemingly ordinary items assume added significance when their owners’ identities are revealed.

The ultimate control of still life photography holds a certain appeal to Leutwyler compared to portraiture. “When you have a still life in front of you, it’s not going to run away,” he explains, “it’s not going to have an attitude, it doesn’t have a publicist. So you better know what you’re doing.” 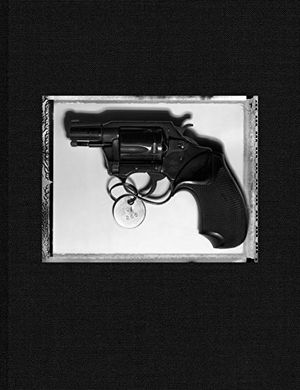 The initial idea of telling stories through people's possessions in Document really coalesced after two particular projects, coincidentally each related to a music icon. Leutwyler was commissioned by the Elvis Presley Estate about a decade ago to shoot a book project, Elvis by the Presleys, for which he spent three weeks in their archives photographing Elvis’ personal effects, including his eyeglasses, gold-plated Beretta and gold-plated microphone.

Later, while wrapping up an assignment for the magazine Mother Jones on gun control, Leutwyler happened upon the .38 caliber revolver used to assassinate John Lennon. It was sitting on a stool at a police precinct, with a 4x5 newspaper clipping from the day the Beatle was murdered. "Sergeant," Leutwyler recalls asking an officer, "Would you mind telling me, is this the gun that killed John Lennon?” It was, and Leutwyler ended up making a photograph of that weapon.

Haphazardly, he had come upon his storyline for Document. “I realized that I could portray people through their objects without photographing them,” explained Leutwyler. “I knew this was the way to do a book.”

Leutwyler, who is now in his 50s, is warm and gregarious speaking on the phone from his Manhattan studio. I can hear the relieved excitement in in his voice when he discusses the book’s release. “Wow,” sighs Leutwyler, and you can almost hear him shake his head. “208 pages took me 12 years. If you divide 208 pages by 12 years it’s a really, really slow process – an expensive, slow process.”

Though the objects speak for their former owners, Leutwyler is the ultimate curator of Document. His love of dance is evident, with the inclusion of ballerina Sylvie Guillem’s pointe shoes and Fred Astaire’s tap shoes. As is his his fondness of pop culture, with Michael Jackson’s iconic sequined glove, comic team Laurel and Hardy’s bowler hats and Han Solo’s blaster. And Leutwyler’s artistic sensibilities are reflected with artist Jean-Michel Basquiat’s sunglasses, designer Massimo Vignelli’s pencil and Andy Warhol’s paintbrush.

Once his project was underway, Leutwyler created a list of personal items to pursue, starting with his childhood heroes James Dean and Jimi Hendrix. “I started to figure out what object from what person would be interesting enough to share with people who believe they know everything on everyone,” he says. And the list continues to grow. “There’s probably 200 images that have not been done yet, which hopefully will become Document II,“ says Leutwyler. “And hopefully not 12 years of work, but maybe six.”

Now that Document is complete, what’s the first object on his wish list for Document II? “Jazz,” answers Leutwyler, who grew up the son of a New York City jazz pianist. “Charlie Parker. John Coltrane. Miles Davis. Dizzy Gillespie. I need to photograph their objects.” Leutwyler feels a intense connection to jazz artist Duke Ellington most of all, since he visited the Duke Ellington Museum with his late father on his first trip to New York City. “I would say the first object is Duke Ellington. Anything. From a cufflink to a piano stool–anything.”

Leutwyler will be exhibiting photographs from Document at the Foley Gallery in New York City beginning November 3.