The Unforgotten: New Voices of the Holocaust

I go on dreaming, dreaming, about survival and about getting fame, in order to be able to tell “the world,”—to tell and “rebuke,” to “tell and to protest,” both seem at present moment remote and unbelievable—but who knows, maybe, perhaps.” —June 11, 1944, Anonymous boy, Lodz Ghetto, Poland

The writer of these lines was far from alone in dreaming that he might one day testify to the brutality he endured at the hands of the Nazis. More than 65 diaries written by young people during the Holocaust have surfaced from Germany, Austria, France, Holland, Belgium, Poland, Lithuania, Hungary, Romania and the Czech lands. Although their reasons for writing varied, many diarists—like the anonymous writer from Lodz—viewed their words as a denunciation, a way to hold the Germans and their collaborators accountable for the unparalleled crimes they committed. These surviving fragments—created by only a tiny fraction of the millions of Jews murdered—are valuable beyond measure, endlessly surprising and complex accounts written inside the cataclysm itself.

What does it mean to read them? What do they tell us and why do they matter? First and foremost, nothing collapses the distance between the reader and the historical past quite like a diary. Written in the moment, as events unfold, it captures the details of daily life that inevitably get lost in later accounts by historians and even survivors. What did people eat and how much? Did they bicker with siblings and parents? How did they respond to outside news of the war? What did the ghetto street look like at night? What was the mood of the ghetto from one day to the next? What were the daily hardships and the occasional reprieves? These insights are rarely found in any other source. In addition, some writers had literary ambitions beyond just documenting their days: They challenged, raged, lamented, grieved, reproached, hoped and despaired, grappling with the biggest questions of what it means to be human in a cruel world.

While adults’ diaries have contributed enormously to our understanding of life during the Holocaust, young diarists offer us something very different but equally valuable. Adolescents are in transition, establishing identity, exploring relationships, discovering what they have inherited and what they will embrace or reject. Teen diarists during the Holocaust faced that developmental challenge against an impossible backdrop, one in which their identities were reduced to their Jewishness, which in turn determined their fate. Young writers in particular struggle with the injustice of this, and with many other things besides: the vulnerability of youth and the loss of parents, the absence of schooling and normal life, the theft of time—the brutal interruption of all that is considered the birthright of the young.

For 25 years, I’ve studied the diaries of Jewish teens in the Holocaust. Recently, as guest curator for an upcoming exhibition at Holocaust Museum Houston, titled “And Still I Write: Young Diarists on War and Genocide,” I’ve read a wider range of young people’s diaries in search of common themes. After the Holocaust, there were solemn promises that the world would “never again” stand by while innocent civilians were murdered en masse. But in the years since, there have been wars and genocides in Cambodia, Bosnia, Rwanda, Darfur, Iraq and Syria, among other places. Diaries written by young people have survived some of these conflicts, too. These writers report on the events of war; they reflect on the way massive forces shape their personal lives; they ask why they must suffer and struggle to survive; and they affirm their humanity while they protest the injustice all around them.

A number of diaries pose fresh challenges for American readers, maybe even cause discomfort and shame. During the Holocaust, Jewish teen diarists often viewed the Allied forces, including the American Army, as their liberators, the source of their deliverance and hopefully their survival. It’s easy to see ourselves as the heroes of those stories. But not every writer saw events from that vantage point.

At the height of U.S. involvement in World War II, young Japanese-Americans were writing diaries from inside government-run internment camps. A teenager named Stanley Hayami was imprisoned at Heart Mountain Camp in Wyoming when he voiced his frustration and despair at the impossible bind he faced. “I don’t see why innocent and good guys have to pay for stuff that the Japanese do,” he wrote in his diary. “Darn it anyhow us loyal Jap. [sic] Americans have no chance. When we’re outside, people look at us suspiciously and think we’re spies. Now that we’re in camp, the Japs look at us and say we’re bad because we still love America. And now the people outside want to take our citizenship away from us as if we’re the bad ones.” Hayami endured the humiliation and deprivation of internment for more than two years before he entered the Army in 1944, sent off to fight for the very country that had unjustly imprisoned him. On May 9, 1945—one day after V-E Day—Hayami’s family learned that he had been killed in action in Italy while aiding two wounded soldiers. He was 19 years old. Hayami was posthumously awarded the Bronze Star and Purple Heart.

In more recent diaries, writers see America in equally complex roles: as bystander, invader and even oppressor. It is not always comfortable, but it is deeply rewarding to read these diaries and shift our perspective. During the Serbian aggression against Bosnians in Bosnia and Herzegovina, America was among the nations that took years to effectively intervene as genocide unfolded. Nadja Halilbegovich, age 13, was keeping a diary in Sarajevo when she was injured by a bomb on October 18, 1992. More than a year later, she wrote in despair: “Sometimes I think that there is no hope and that we are all dying slowly while the whole world watches silently. They send us crumbs of food yet never condemn those who kill us....The aggressors kill children and rape women. The world looks on and perhaps gives us a thought while sitting in their comfortable homes and palaces. Are they unable to see?...WORLD, PLEASE WAKE UP AND HELP US!!!” (In 1995, America finally intervened militarily, along with other NATO forces, and helped coordinate the negotiation of a peace agreement.) Nadja published her diary at 14 and, two years later, escaped to the United States. She now lives in Canada and advocates for children of war.

Another Bosnian diarist, Zlata Filipovic, was only 10 in 1991, when she began her diary with entries on piano lessons and birthday parties. Soon she was cataloging food shortages and the deaths of friends during the siege of Sarajevo. By her final entry in October of 1993, she tallied the lethal impact of one day’s bombing: 590 shells, six dead, 56 wounded. “I keep thinking that we’re alone in this hell,” Zlata wrote. She eventually escaped with her family and now works as a documentary filmmaker in Dublin.

In Syria, a young man using the pseudonym Samer began a diary in Raqqa in 2013 at the suggestion of journalists from the BBC. As ISIS took over and carried out barbaric acts against civilians, he chronicled the airstrike by the Syrian regime that killed his father as well as his own arrest and punishment of 40 lashes for cursing in the street after a neighbor’s beheading by ISIS. Reflecting in his diary, he lamented: “We didn’t believe the international community would stand with its arms behind its back, watching crimes being committed against unarmed people....Even though [it] could clearly see what was going on, it didn’t act.” Samer worked with the BBC to send his encrypted notes out of Syria; later his diary was translated into English and published as a book in Britain and America in 2017. Samer ultimately escaped Raqqa but remains trapped in Syria, a country, like so many others, in the vise of a civil war.

Traditional handwritten, bound notebooks have given way to “diaries” written as blogs, online journals and as entries on Facebook and Twitter. While past diarists often hoped their work might one day be read, today’s writers, steeped in social media, have skipped that step entirely, posting their thoughts for consumption in real time. We may regret that many of these writings aren’t preserved as tangible artifacts with yellowed pages or inky penmanship that bear witness to the authors and the passage of time. Yet how many of those handwritten diaries have been lost forever? For those who write under conditions of uncertainty and danger, technology provides a far greater chance of reaching the audience that will hear and even help them.

During the Iraq War, 15-year-old “Hadiya” wrote from the city of Mosul beginning in 2004. In her IraqiGirl blog, she expressed a fondness for Harry Potter and worried about her grades while documenting the growing conflict. “Last night...I couldn’t sleep because the Americans were bombarding our neighborhood,” she wrote. “What should I say? I have so many things I want to write. But I can’t. Until when must we follow what America says? Until when should we follow their orders? Who is America? Ha! We have the oldest civilization. We have oil. And we have the capability to rule ourselves.” Excerpts from her blog were published as a book in 2009, but she continues to post on IraqiGirl even today. After she escaped Mosul, Hadiya became a refugee in Jordan and moved to Australia when she was granted a humanitarian visa last year.

Technology changes not just the physical form, but also the potential, even the purpose, of a diary. Traditionally, we read the words of those who suffered in past atrocities, knowing—perhaps with some secret relief—that we could empathize but not act. Today’s online war diaries, describing unfolding horrors, are fundamentally shifting the burden of moral responsibility to the reader. Hadiya engaged in direct conversation with her audience. “I received many comments and letters saying that I am not Iraqi,” she wrote after reading some public responses to her diary. “Another one said I don’t deserve the freedom that the Americans are bringing to the Iraqi people. That my view of the war is wrong and I should change it. I’ll tell you what—no one in this world can know what I’m feeling. I respect your view of the American soldiers but it is not you who is prevented from sleeping by the sound of bullets. It is not you who every day is woken up by the sound of bombs. It is not you who hears the rocket falling and doesn’t know if it will be on his house or his aunt’s house or his grandfather’s.”

These digital missives also raise new questions about credibility and authenticity. In 2016, seven-year-old Bana al-Abed tweeted about her ordeal in the sealed-off city of Aleppo, Syria. “I need peace,” read one tweet on September 24. “I can’t go out because of the bombing please stop bombing us,” pleaded another. The family eventually escaped to Turkey, where Bana’s diary was published last fall. Though Bana amassed more than 350,000 followers on Twitter, some questioned whether it was she or her mother, Fatemah, who was the true author. (Bana’s Twitter bio acknowledges that the account is “managed by mom”; Fatemah maintains that the girl is deeply involved in its writing.) There is, of course, no way to know for sure—it is easier than ever to blur the lines of authorship on the internet.

Yet even in today’s jaded world, these young diarists still have the power to jolt us out of our complacency. In dire circumstances, they become their own historians, documenting the oppression and violence that threatens to silence them forever. The survival of their diaries ensures that, whatever else might have been lost, their voices of outrage and protest endure. 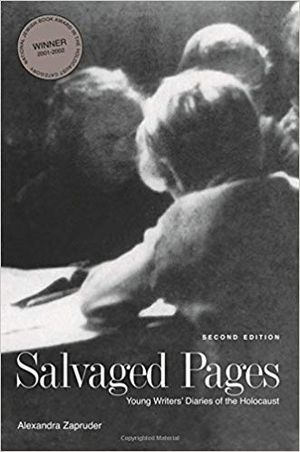 Alexandra Zapruder is the author of Salvaged Pages, which won a National Jewish Book Award, and Twenty-Six Seconds.