David McCullough, a Pulitzer Prize-winning historian and Smithsonian contributor, is known for writing about some of the most famous Americans, including presidents John Adams and Harry Truman. But his new book centers on five men many people have never heard of: the pioneers who settled what was known as the Northwest Territory in the late 18th century.

In the Treaty of Paris that ended the Revolutionary War, Great Britain handed the newly minted United States a huge package of land—a region that includes the current states of Ohio, Indiana, Illinois, Michigan and Wisconsin. With the passage of the Northwest Ordinance in 1787, Congress opened up this swath of wilderness for cheap to compensate underpaid Revolutionary War veterans. That ordinance, championed by Massachusetts minister Manasseh Cutler, also set three sweeping conditions for the territory: religious liberty, free universal education and the prohibition of slavery. Soon after, a group of pioneers, most of them Puritans from New England, set out to establish the first U.S. settlements in this vast expanse. The ordinance also pledged that “the utmost good faith shall always be observed towards Indians.” Although this initial group fostered more peaceful relations with neighboring tribes, the influx of settlers throughout the territory would lead to fierce conflicts until the Native Americans—including the Shawnee, Seneca and Delaware—were eventually forced out of the region.

McCullough’s upcoming book, The Pioneers, focuses on five men, including Cutler, who helped build the first settlement in the region, in a town called Marietta on the banks of the Ohio River. Over years of visits to that river town, McCullough pored over a collection of primary documents stored at Marietta College, including letters, diaries and unpublished memoirs. The resulting narrative follows these early Midwesterners as they come up against great odds to transform their little town into a thriving settlement. Even today, McCullough tells me, we have a lot to learn from the pioneers: “Their belief in honesty, and hard work, and worthy purpose in life, and kindness—all of this is at the core of who we are, and we must never forget it,” he says.

What inspired you to write this book and focus on this period in American history?

A number of years ago, in 2004, I was invited to come speak at the commencement ceremony at Ohio University because it was to be their 200th anniversary. In the process of preparing my thoughts on what I might say, I came to know more than I had known about the history of the university and found it fascinating. Particularly when I found that the oldest building on campus, Cutler Hall, was named for one of the most remarkable men I’ve ever come upon: Manasseh Cutler, who came from Massachusetts, and who was the leading voice for the passage of what was called the Northwest Ordinance of 1787—one of the most important decisions Congress ever made.

The repercussions of that in so many ways are hard to estimate, and yet the people who did this have not really been adequately remembered or celebrated or even presented as the remarkable human beings they were. Most of the characters in this book I’ve written are totally unknown to most all Americans, as they were to me, before I began working on the book. And I think that their memories deserve to be everlasting. It’s such an American story and brings to the foreground so many virtues and senses of American progress of the best kind that we need to remember, now maybe more than ever. 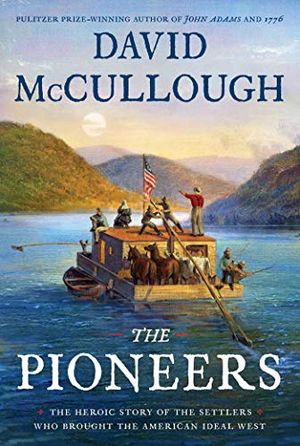 The Pioneers: The Heroic Story of the Settlers Who Brought the American Ideal West

Pulitzer Prize–winning historian David McCullough rediscovers an important and dramatic chapter in the American story—the settling of the Northwest Territory by dauntless pioneers who overcame incredible hardships to build a community based on ideals that would come to define our country.

There are five characters who are the central focus of your book. What drew you to those characters, including Manasseh Cutler, and how did you decide those were the ones that you wanted to center the story around?

Manasseh Cutler was an 18th-century polymath. He was a man who was as brilliant as almost anybody I’ve ever read about. He had doctoral degrees in law, theology and medicine. He was three doctors in one, if you will. He was also almost certainly one of the leading botanists of the time; he spoke several languages; he was a great speaker, and so forth. And he never went and lived [in the Northwest Territory]. He just got it started. But one of his sons, Ephraim Cutler, became a leading figure, and is one of the leading figures of my book.

The other was a notable Revolutionary War general named Rufus Putnam, and another was this man, Joe Barker—a carpenter who eventually became a prominent architect. And then there came a young doctor who arrived later. He was only in his 20s, named Samuel Hildreth, who had a spectacular reach of mind, who was not only a physician and a scientist but became one of the leading scientists of his time.

I had always wanted, my whole writing career, to write a history of a town in which the main characters, all real characters from real life, would be people you've never heard of. I was inspired, I’m sure, by Thornton Wilder’s famous play Our Town. I think one of the lessons of history that is underestimated is gratitude. When I think of how much we owe people like that, to have no interest in them, or know nothing about them, is an inexcusable ingratitude. History is about human beings, it’s not just about facts and figures and quotations.

Like you mentioned, these are all people who are essential to our history but that most people don't know about. Why do you think they've gone unrecognized?

I don't know how this story has not come to the surface before. I'm astonished. It has everything. And there it all was—it wasn't scattered in 14 different places around the country in obscure attics or something. It was all there in perfect condition, looked after by a superb librarian and her staff, on a very beautiful, small campus in Ohio. I don't know if I've ever been happier than I have been when working with that collection.

What was that research process like for you? What was it like being in the same place where your characters had been so long ago?

Well, of course that was the big part of it, too. It’s not only all one wonderful and well-cared-for collection, but it’s right there where most of the story all happened.

I stayed in a fine hotel right on the river, just about 100 yards, if that, from where the first settlers landed. And there’s that magnificent Ohio River. River towns are story towns—I feel that strongly. I grew up in Pittsburgh, where the Ohio River begins, knowing that there were always stories about the river towns. And that’s what history is: stories. We need those stories, and we are better off having them. We can do what we do in life more knowledgeably if we have some sense of history.

Did anything surprise you about these characters’ lives?

I was surprised at how well-read they were. Now keep in mind that these weren't the pioneers as we're often picturing them out on the open plains of the American West. These are the pioneers back where the ancient trees were giant, where foxes and bears and rattlesnakes and all that were part of the life, as were deer and turkeys and squirrels.

These are not pioneers like Daniel Boone, on their own, carrying a long rifle and wearing a coonskin cap. These were people who came out as families, and there was great courage expressed in just doing that. Ephraim Cutler's family came with him when he first came out, and two of his children died en route from disease. It was a high-risk venture. But at the same time, it was also extremely beautiful, and extremely beneficial in the long run. All of them, with only a few exceptions that I know of, thanked their lucky stars that they were being given the opportunity.

Could you talk a little bit about the ways that these pioneers changed our country and where you see the legacy of this settlement today?

They advanced the state educational system as no state ever had until then. They instituted the whole idea of state universities. They demonstrated that slavery was wrong, that slavery was something we could stop and get rid of, if we all joined forces. They enjoyed music and literature. When they came west, they didn’t just bring axes and saws and cooking kettles. They brought books; they brought a love of learning, and it never went away.

Much of that is in the Puritan tradition. This is really in many ways as much a New England story as it is a wilderness of the West story, because virtually all the characters were from New England; they were from Massachusetts and Connecticut. Education was deep in the whole philosophy or attitude of the Puritans. We have something of a misconception about the Puritans; they also liked to sing and dance and have a good time, just like everybody else. And their influence on the whole world of American education is incomparable. That’s why all the first universities were in New England, and still stand so prominently in what matters to our country.

In many ways, all of us are softies compared to these people. And I’m just so very happy that I’ve gotten to know them as I have, and I want others to get to know them too. That’s why I write the books I do. None of them knew what they were in for, and none of them knew whether they would succeed. But none of them gave up. And they succeeded, to our benefit, and we need to learn a lot from them.

Maddie Burakoff is an editorial intern with Smithsonian magazine. She is currently a junior at Northwestern University, where she studies journalism and Spanish.