The face puzzle, a box of wooden jigsaw pieces, looks like a child’s game, a primitive, flattened-out version of Mr. Potato Head. Start with the biggest piece, a half-inch-thick hunk of wood shaped like a head. Place the others where they belong: the eye-shaped piece, the nose, the mouth and several more that together form an ear. Finish it and you have a profile of a bald man with sharp features smiling a tight little smile.

The wooden puzzle might look like fun, but it was anything but that to the men and women who were once required to solve it. The Feature Profile Test, in the collections of the Smithsonian National Museum of American History, was administered to immigrants at Ellis Island in the early 20th century. Those who failed to assemble it correctly could be labeled “feebleminded” and sent back home.

The Feature Profile Test encapsulates the complex feelings America had toward the immigrants of its time. It was a tool for ushering suitable foreigners into citizenship—and for turning others away. It constituted an idealistic effort to be fair—while at the same time being cruelly unjust. Yet it represents an almost benign era in American immigration history—because what followed would be far worse.

New York’s Ellis Island was, from 1892 to 1954, the nation’s main immigration gateway, which some 12 million people passed through. For these new arrivals, who in many cases came from simple rural villages, Ellis Island could be a frightening place—a bedlam of unruly crowds and indecipherable tongues, presided over by grim-faced immigration officers.

Immigrants in the early 1900s were examined for physical and mental illness, questioned about their ability to support themselves financially, and challenged on whether they held radical views. As part of the inquisition, the U.S. Public Health Service administered primitive intelligence tests. “The purpose of our mental measuring scale at Ellis Island,” Howard A. Knox explained in 1915, “is the sorting out of those immigrants who may, because of their mental make-up, become a burden to the State or who may produce offspring that will require care in prisons, asylums, or other institutions.”

It was Knox, a physician, who developed the Feature Profile Test, which he administered from 1912 to 1916. (Knox resigned his post at Ellis Island that year, eventually establishing a practice as a country doctor in New Jersey.) The puzzle represented a progressive reform of sorts. Before it, the public health service measured intelligence with traditional I.Q. tests, whose questions required cultural and linguistic knowledge that many immigrants did not have, causing perfectly intelligent people to test as “imbeciles.” The Feature Profile Test relied on more universal knowledge—around the world, noses and ears are in the same places. And it could be “administered with minimal use of language, ideally by use of pantomime alone on the part of both examiner and examinee,” notes John T.E. Richardson, author of Howard Andrew Knox: Pioneer of Intelligence Testing at Ellis Island.

For all of the democratic impulses behind it, the Feature Profile Test nevertheless could be viewed as an outgrowth of a deplorable ideology. American immigration policy of the time was grounded in eugenics, the pseudoscience of trying to uplift humanity by preventing the “unfit” from having children or, if they lived outside of the country, keep them out.

When Knox administered the Feature Profile Test, the stakes were high, and the conditions far from ideal. Typically, the test-takers had just arrived after a long voyage aboard ship, often in horrific conditions, and they were in a foreign land. They might be sleep-deprived, depressed or ill. And they might never have taken a test before. If they did not complete the puzzle in five minutes, that failure—along with other factors the doctors weighed—could lead to a mother being ripped from her family and shipped back to the Old World. Immigrants were turned back often enough, for a variety of reasons, that Ellis Island earned the nickname “The Island of Tears.” Over a fiscal year ending June 30, 1914, nearly one immigrant per 1,000 of the more than one million examined—957 individuals—were deported as mentally defective.

As crude as the puzzle test may seem today, it reflected the belief that healthy immigrants should be admitted. Within a decade, though, anti-immigrant, eugenic and racist forces would persuade Congress to pass the Immigration Act of 1924, which dramatically cut back immigration of Italians, Eastern European Jews and other groups considered undesirable. The immigrants who were shut out of America—including many Jews who would, only a short time later, try to flee the Holocaust—would have gladly taken their chances with Dr. Knox’s wooden puzzle. Imbeciles: The Supreme Court, American Eugenics, and the Sterilization of Carrie Buck 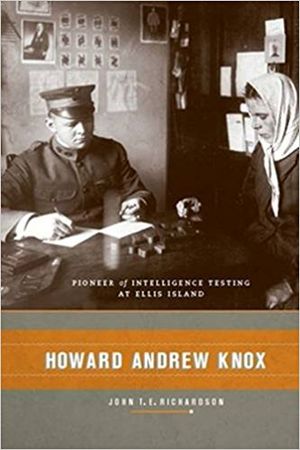