It took only ten minutes for Harvey Ball to create the Smiley face. In 1963, the State Mutual Life Assurance Company in Worcester, Massachusetts, hired him to come up with a design that would help raise the morale of its employees. Ball was an artist formally educated at the Worcester Art Museum School and a trained sign painter. After he presented the Smiley face, the company paid him $45 for his work. Neither Ball nor the insurance company took out a trademark. Before too long, tens of millions of buttons with the iconic image (two black marks for eyes and a black grin on a bright yellow background) were in circulation.

In the early 1970s, the brothers Murray and Bernard Spain secured a trademark for a combination of the face with the phrase “Have a Happy Day,” later changed to “Have a Nice Day.” The rest is history—images and sayings that we are all familiar with. Finally, in 1999, Ball created the World Smile Corporation to license one version of the image. He used the proceeds to help improve the lives of children, and his son Charles said that his father was not sorry that he made so little money off what he wrought. "He was not a money-driven guy, he used to say, 'Hey, I can only eat one steak at a time, drive one car at a time.'"

Ball died in 2001 at age 79, too soon to witness the full flowering on positive psychology and happiness studies, scholarly fields that combine Eastern religions, neuroscience, evolutionary biology, and behavioral economics—but above all represent a shift of focus among some psychologists from mental illness to mental health, from depression and anxiety to subjective well-being. 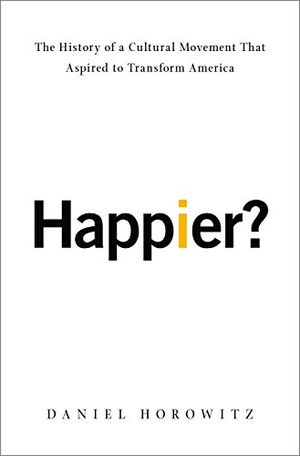 Happier?: The History of a Cultural Movement That Aspired to Transform America

When a cultural movement that began to take shape in the mid-twentieth century erupted into mainstream American culture in the late 1990s, it brought to the fore the idea that it is as important to improve one's own sense of pleasure as it is to manage depression and anxiety.

His own commitments underscore two key findings of positive psychology, insights based on science. Although some of these insights were available before he died, it is unlikely he knew about them—and yet, he lived them. If there was a moment when positive psychology emerged on the American scene with organizational heft, it was in 1998, when University of Pennsylvania psychology professor Martin Seligman delivered the presidential address at the American Psychological Association, in which he defined positive psychology as “a reoriented science that emphasizes the understanding and building of the most positive qualities of an individual: optimism, courage, work ethic, future-mindedness, interpersonal skill, the capacity for pleasure and insight, and social responsibility.”

Harvey Ball didn’t need psychologists to tell him of their discovery of the Helper’s High, the pleasure that a person gets from giving, the basis of the link between altruism and a sense of well-being. Nor did he need to read the research that demonstrated that above a certain level of income ($70,000 is the one most commonly mentioned), additional income provides only marginally meaningful increments of happiness.

As with almost any finding in a new and burgeoning scientific field, claims about the impact of greater income are contested. However, they led to important consequences. The caution that more income above a certain level did not necessarily enhance positivity caused some political activists to call for a more egalitarian distribution of income; studies of the relationship between a nation’s Gross Domestic Product and its citizens’ well-being seem to reinforce that push. The World Happiness Report—an annual survey conducted since 2012—determined that citizens of Finland, the Netherlands, and Denmark report more life satisfaction than do those living in the United States, which has a higher GDP per capita.

Ball would no doubt have evidenced a grin on his own face when in 2015, Dan Price, the head of Gravity Payments, a Seattle credit-card-processing firm, having learned that incomes over $70,000 do not make people appreciably happier, decided to reduce his own salary from $1 million to $70,000 and increase those of his employees to at least $70,000. The move is still paying dividends. Of course, just as international comparisons are controversial, so too was Price’s decision. His brother, who had co-founded Gravity Payments, unsuccessfully sued him.

Rarely have academic findings so quickly influenced a culture. Some of this is coincidence, representative of how experimental findings and cultural change occur simultaneously but independently. In the mid-1990s, Oprah Winfrey reconfigured her show to shift from a focus on personal problems to opportunities for personal growth. Positive psychology might have gained significant traction under different conditions, but television evangelism, TED talks, and the proliferation of apps and websites devoted to aspects of positive psychology and self-improvement, along with Oprah’s enterprises, greatly accelerated and amplified the field’s reach. Support from private foundations and government agencies also helped launch, build, and define their presence, inside and more notably outside university walls. So, too, did opportunities to spread happiness via positive coaching and positive institution building.

While some assertions of positive psychology can be questioned—there are those who say its practitioners has moved too quickly from experimental findings to bold assertions, as well as those, relying on the works of Marx and Foucault, questioning its politics—certain insights are indeed significant. Investigations underscore the connection between physical health and mental well-being, the importance of social relationships, what we can (our perspectives) and cannot (our genetic composition) control, and the benefits of character strengths such as grit and compassion.

Ball’s influence, too, has been pervasive. In January 2005, Time Magazine placed multiple Smiley faces on its cover and announced that inside readers could learn of “The Science of Happiness”—and answers to why optimists live longer, whether God wants us to be happy, and if joy is in our genes. In January 2009, Psychology Today put a Smiley face on its cover, and announced that with the number of books on happiness growing from 50 published in 2000 to 4,000 published 8 years later, a “happiness frenzy” had arrived. “Herein,” the cover story promised, “we report the surest ways to find well-being.” Then in July 2016 Time offered a special edition, on “The Science of Happiness” with no less than 15 smiley faces—one with a halo, one with two hearts, and one with a blinking eye. Inside were “NEW DISCOVERIES FOR A MORE JOYFUL LIFE,” including an emphasis on relationships, meditation, and exercise.

Had Harvey Ball lived to see these covers, he likely would have smiled.