“The sailor from the merchant ships was in those days known to America as a bum,” the former mariner and author Felix Reisenberg wrote. “He was associated with rotgut whiskey, waterfront brawls and quickie strikes that held up big passenger ships at New York, New Orleans and San Francisco . . .”

The era was the earliest stages of the United States’ involvement in World War II, and Nazi Germany was already bringing the war right to the nation’s shores – with shocking results. U-boats devastated merchant shipping off the U.S. East Coast and Gulf Coast, attacking vessels within sight of beaches in Virginia, North Carolina and Florida, and at the mouth of the Mississippi River. America was too undermanned and ill-equipped to defend its own shoreline. U-boats used the glow of American coastal cities to silhouette merchant ships for torpedo strikes, like ducks in a carnival shooting gallery.

On those ships were not military personnel but merchant mariners -- civilian volunteers with the U.S. Merchant Marine, hauling vital war cargo for the Allies. Merchant mariners were the supply line that provided virtually everything Allied armies needed in order to survive and fight on foreign battlefields. The seamen had no military standing or government benefits, but they possessed an unusual variety of courage and gave their lives for their country as valiantly as those in the armed forces did.

Surviving a U-boat attack often meant running a gauntlet of dangers, including fire, explosions, icy water, sharks, flaming oil slicks and long odysseys in open lifeboats. “You were taking a chance, that’s for sure,” recalled Jack Rowe, a merchant mariner from tiny Gwynn’s Island in Mathews County, Virginia. “But a lot of people were taking chances. You couldn’t just say, ‘Why me?’” 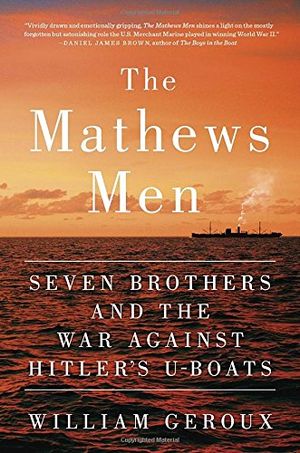 The Mathews Men: Seven Brothers and the War Against Hitler's U-boats

Standing lookout on a merchant ship was nerve-racking, especially around dawn and dusk, when the colors of the sea and sky merged into a gray haze, and any ripple of motion or flash of color might be the plume of a torpedo. “Occasionally a man will get the jitters and will be noticed walking the deck at night when he should be asleep,” recalled mariner Raymond Edwards. Once a torpedo struck, every moment became precious and every decision irreversible. “Even two seconds could mean the difference between life and death for any member of the crew. Running in the wrong direction might cut a sailor off from all means of escape. Jumping overboard at the wrong spot or at the wrong instant might easily cost a life. If a sailor is lucky enough to be alive after a torpedo hits his ship, it takes quick thinking and fast action to get him off the ship and into a lifeboat. Many are saved by sheer luck.”

The U-boat war was particularly unforgiving to merchant mariners. The Merchant Marine suffered a higher casualty rate than any branch of the military, losing 9,300 men, with most of the losses occurring in 1942, when most merchant ships sailed U.S. waters with little or no protection from the U.S. Navy. In March 1942 alone, 27 ships from six Allied nations were sunk off U.S. shores. Statistically, America’s coastal waters were the most dangerous, the scene of half the world’s sinkings. The experience of being torpedoed was so common that the president of the Boston Seaman’s Club founded a “40-Fathom Club” for those who had survived it. “I hope the membership won’t become too large,” he added, but it grew larger every day as rescue ships brought oil-soaked survivors to the docks at Halifax, Boston, New York, Norfolk, Morehead City, Miami, and Havana. Many of the mariners who survived torpedo attacks went right back to sea, often sailing through the same perilous waters, only to torpedoed again. One mariner was torpedoed ten times.

Despite their sacrifices, the members of the 40-Fathom Club were viewed by the American public with some ambivalence. Mariners were in such demand that shipping companies had lowered their standards and filled out crews with drunks, idlers, thieves, brawlers, and card sharps. The Merchant Marine’s image was further eroded by the presence of Communists in the maritime unions, although most mariners had no interest in radical politics.

But they were deplored by some Navy leaders for refusing to bend to military discipline. Other critics complained the mariners’ wartime bonuses raised their pay higher than that of military men— ignoring the facts that mariners received no government benefits, paid income taxes, and earned money only when their ships were at sea. If their ships were torpedoed, they stopped getting paid the moment they hit the water. They were off the clock when swimming for their lives. And their civilian status would shut them out of a lifetime’s worth of military benefits including health care, money for college and low-interest loans.

Not everyone piled on the Merchant Marine. President Franklin D. Roosevelt praised mariners in speeches, and his wife, Eleanor, credited them with “supreme courage” and suggested they be issued uniforms. Helen Lawrenson, a writer for Collier’s magazine, waded into a dingy seamen’s bar in Greenwich Village and was charmed by a group of mariners who went by the names of Low Life McCormick, No Pants Jones, Screwball McCarthy, Foghorn Russell, Soapbox Smitty, Riff Raff, and Whiskey Bill. Ten of the twelve mariners she met had been torpedoed at least once, and one of the other two complained, “I feel so out of place. I’m a wallflower, a nobody.” Lawrenson wrote that the mariners cut decidedly unromantic figures, guzzling “vast and formidable quantities of beer” while belting out sea ditties with raw lyrics. Beneath the surface, however, she found them intensely patriotic, casually fearless, and wise to the workings of the world. “They were the best informed, the most widely traveled, and the most truly sophisticated men I have ever met,” she concluded.

The New York Times characterized merchant mariners as the war’s unsung heroes: “No one steps up to the bar to buy them drinks. No moist-eyed old ladies turn to them in the subway to murmur ‘God bless you.’ The cop on the beat, gentle with the tipsy soldier or the unsteady gob [Navy man], is apt to put his nightstick to the britches of a merchant sailor who has tippled heavily in the town’s bars to celebrate his rescue from the sea.”

Most of the mariners who sailed against the U-boats are gone now. The few thousand who remain have come to regard Memorial Day as a celebration that has never fully included them. But it’s still not too late to remember, belatedly, how much we owe them.