London Mayor Boris Johnson grew up with Winston Churchill. That is, his parents would often quote the British Bulldog around the house. So when Churchill’s estate asked Johnson to write a biography to commemorate the 50th anniversary of Churchill’s death, the mayor agreed. We spoke with Johnson about Churchill’s legacy and his new book, The Churchill Factor.

In The Churchill Factor, you quote a source as saying that Winston Churchill was the greatest Briton of all time. What made Churchill so great?

The sheer scale of his achievement and in particular, in being the only man who could possibly have saved Britain and indeed western civilization in May 1940 from a catastrophe that would have disgraced humanity.

You write that when you were growing up, your father would recite Churchill quotes. Can you recall any in particular?

He would recite some of the famous lines from [Churchill's] great wartime speeches. And I think it was my mother who used to tell us jokes about Churchill. You know, the famous one about when he’s in the lavatory and he’s told, someone comes to him and, the Lord Privy Seal has got a message for him. And he shouts out, ‘Tell the Lord Privy Seal that I’m sealed in the privy, and I can only deal with one shit at a time’…That turns out, to my amazement, to be true. Or at least partly true.

Do you have a favorite Churchill quote?

There are so many. His gift for language was so incredible…The great story about when the chief whip comes to tell him about some minister who’s disgraced himself on a park bench. Some Tory cabinet minister is caught on a park bench at 6 o’clock in the morning in February with a guardsman, which is a total disgrace. And obviously the party machine starts to think he’s got to resign and the news of this is brought to Churchill in his study in Chartwell. And he doesn’t turn around from his desk and the chief whip’s relating this unhappy event, and Churchill says after a long pause, “Do you mean to say that so and so was caught with a guardsman?” “Yes, prime minister.” “On a park bench?” “Yes.” “At 6 o’clock in the morning?” “Yeah, that’s right.” “In this weather?” “Yes, prime minster.” “By God, man, it makes you proud to be British.”

But aren't some of those great quotes fake?

That’s the trouble. I heard that one from his grandson, whether or not that’s a substantial source, I don’t know…When [politician] Bessie Braddock told him he was drunk, he certainly did say, “Well madam, you’re ugly, but I’ll be sober in the morning.” I’m afraid that is true, and very rude. [Experts believe that Churchill got that line from a W.C. Fields movie.]

What makes his quotes so memorable?

He loves reversing word orders…chiastics. So, “It’s not only the beginning of the end, but the end of the beginning.” Or, “I’m ready to meet my maker, whether or not my maker is ready to be meeting me.” Or, “I’ve taken more out of alcohol than alcohol has taken out of me.” “We shape our places and then they shape us.” He’s using the same device. 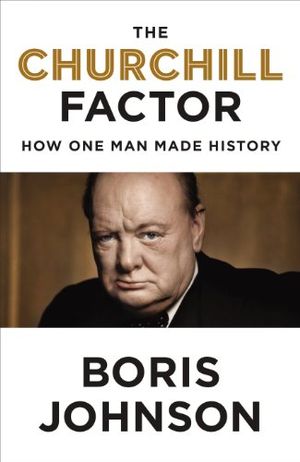 The Churchill Factor: How One Man Made History

Praise for Johnson's Life of London "A sparkling blend of history, biography, and geography . . . Johnson's exuberant paean makes a persuasive case that genius breeds genius." -The New York Times Book Review "Boris Johnson is Britain's most popular politician. He is also its wittiest-and most erudite. . .

He was always thought to be a bit over the top until events themselves became a bit over the top. And there was only one man who could rise to the level of events, and that was Churchill, and he found the words that suited the time. And he did it by mixing up Latin and English words very brilliantly…He would swoop from the flowery Latinate words to the very short, punchy Anglo-Saxon words.

With so much written on Churchill, how did you manage to write something new?

There have been very few books recently that have tried to bring him to a wider audience, and tried genuinely to explain what made him the man he was. I think there’s been such an abundance of Churchill scholarship and "Churchilliana," that no one has really tried to bring things together and to explain why he was the guy he was and also how he impacted on history and put it in an accessible way. That was what I think the Churchill estate felt they needed as we came up to the 50th anniversary of his death. Because in Britain, certainly, his memory is fading, and although everybody knows who he was, everybody knows what he did in 1940, there are aspects of his life that are now being lost and forgotten. And so the estate and Churchill 2015, this organization, we’re all very keen to try and make him as widely known as possible…I’m proud to say [the book] is selling a huge number of copies, at least in Britain, which is obviously I think more to do with the subject than with the author.

Thankfully, I had a lot of cooperation from the Churchill estate, from a brilliant guy called Allen Packwood, who runs the Churchill Archives Centre, and a wonderful, wonderful researcher called Warren Dockter. Dr. Dockter, as he's notably called. Warren and I used to wander around. We've been around the battlefields of the First World War, we've been to the war rooms, we've been to [Churchill's] painting studio. It’s just been incredible fun. I managed to carve out hours here and there in my job as mayor and it’s been fun just to walk around and share ideas with Warren.

Like Churchill, you’re a British journalist-turned-politician. In what ways have you tried to emulate him?

The truth is, lots of journalists and politicians try pathetically to emulate [him], but all of us fall so very short. He casts a very long shadow over the whole thing…I’m a journalist of sorts and I’m a politician of sorts, but it’s nothing on the same scale as Churchill. He wrote huge numbers of books. He produced more than Shakespeare, more words than Dickens, and indeed more than both of them combined. He won a Nobel prize [for literature]. He was the highest paid journalist of his time. So as a journalist he’s hard to match and as a politician, certainly. It’s extraordinary. He was 64 years in House of Commons. He held virtually every great office of state. He was indispensable in winning the First World War, the Second World War. I mean, Christ.

He smoked 250,000 cigars. I think I’ve probably in my life smoked fewer than 100, so it’s pathetic. Any comparisons are ludicrous.

You’re the keynote speaker at the next International Churchill Conference. What makes this 50-year milestone since his death so significant?

I think he reminds British people of a certain quality of greatness, and I think people are interested in this idea of what makes somebody great...So Churchill 2015 is an opportunity to reflect on those values and continuing global importance.