At the Iraqi Site of Assur, Ancient History Stands at Risk of Destruction

In its time, the Assyrian capital faced waves of invasions and abandonment. Now a small team of archaeologists are protecting it from more modern threats 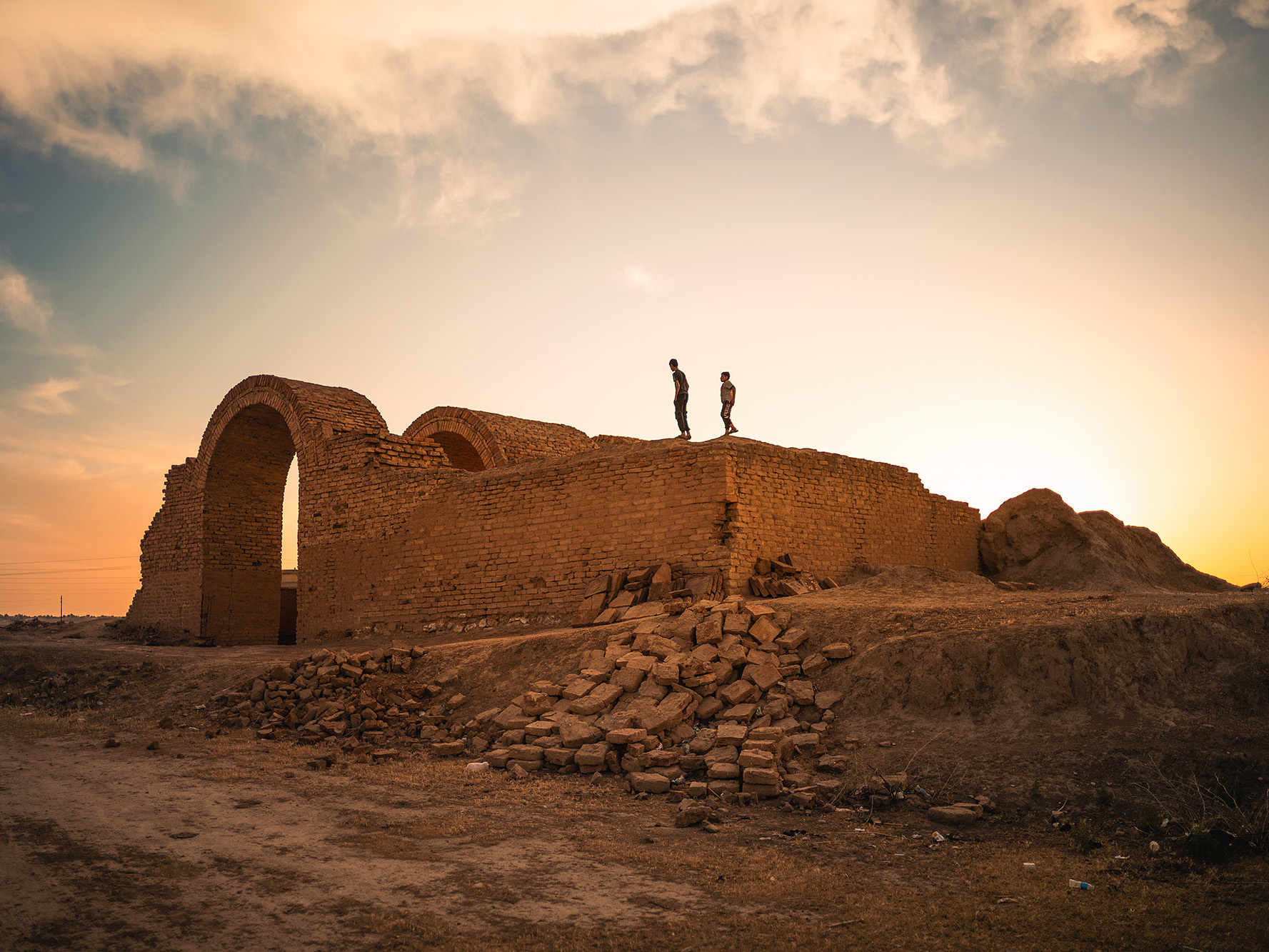 On the west bank of the Tigris, less than a mile downriver from the town of Sherqat in northern Iraq, a wedge-shaped rocky outcrop presses the blue ribbon of the Tigris into a sharp southward bend. Bursts of green crop fields cling close to the water, but in the distance is an unbroken expanse of beige. At the base of the crag I arrived at the perimeter walls of a tired-looking building with barred windows and an armed guard. This was the office of Salem Abdullah, archaeological director of the ancient city of Assur, which once thrived on this rock as the capital of the Assyrian Empire.

Abdullah, who was raised in a nearby village, has a long connection to Assur. His father worked here, where he died of a heart attack among the ruins, and since 2001 Abdullah has worked here too. “My relationship with this place is above a job,” he told me. “It is like family. I think of this place like my grandmother. Come, and I’ll introduce you.”

We left the office under a blazing summer sun, stepping over the remains of mud-brick walls and slowly climbing as we crossed the city. A hot wind kicked up ancient soil. The site measures only a square mile, but walking it made it feel larger, even sprawling. Abdullah avoided the dirt road that cut through the center, instead picking a path straight over the ruins. He wore a button-down shirt and gray polyester suit but scrambled over low walls and trenches with ease.

We stopped at the edge of an escarpment. The Tigris tumbled by, roughly 85 feet below. To our right a crumbling ziggurat rose from the lip of the cliff. “This area was the temple of Assur,” Abdullah said, shielding his eyes from swirling dust. “The most important place in the whole city.”

The Assyrian Empire grew out of the founding of the city-state of Assur in the third millennium B.C. Between the ninth and seventh centuries B.C., it was the most powerful empire the Near East had ever seen, encompassing Mesopotamia, Anatolia and parts of Egypt and the Levant. Assur, the empire’s first capital, was believed to be the physical manifestation of the deity for whom the city was named, and the temple his eternal residence. But it was also a wealthy hub for regional trade, positioned along one of the main caravan routes, and it formed an especially lucrative trading relationship with Anatolia, in what is now Turkey. Much of what we know about the city’s early flourishing comes from a remarkable collection of more than 23,000 clay Assyrian tablets discovered at the Turkish site of Karum Kanesh, 600 miles away.

As I looked with Abdullah across the site, the ancient city took shape before my eyes. Ruins coalesced like a blueprint into housing districts, temple walls and occasional monumental buildings. Most dramatic was the ziggurat, which is some 85 feet tall and once stood at least twice as high. More than 4,000 years old, it was part of a temple complex dedicated to the god Assur. In antiquity its six million mud bricks were covered with sheets of iron and lead and inlaid with crystals. Now the great mound looked as if it were melting, with dried mud settled like candle wax around the base.

“Only a fraction of all this has ever been excavated,” Abdullah said. “There were 117 Assyrian kings. When these kings died, they were buried here.” But to date only three royal graves have been identified. “Where are the rest?” He paused. “They’re here, under our feet.”

Assur was first excavated at the turn of the 20th century, when a German expedition established the city’s boundaries by cutting a series of trenches. The archaeologists recovered thousands of cylinder seals and baked clay tablets, some carved with cuneiform inscriptions written in the second millennium B.C., which detailed religious rituals, business transactions and other subjects. But in recent decades, archaeologists have worked at the site only intermittently. “For Iraqis, it’s expensive,” Abdullah said. “The government can’t afford it.” The last major excavation concluded in 2002. Abdullah estimates that 85 to 90 percent of the site remains unexplored.

The challenges are numerous. For a start, it’s nearly impossible to secure the site. A mesh fence runs along to the road, but many sections have been flattened or removed altogether. And while a visitor technically requires a ticket, without staff to enforce the rule that system hasn’t worked for 30 years. Instead, residents of Sherqat treat Assur like a local park, wandering in for picnics. “In spring you can’t see the ground,” Abdullah said, referring to the volume of trespassers and the litter they leave behind. He stressed that local people would be less likely to damage remains if they knew more about the place and its value, but given the conflict and instability of recent decades there has been little opportunity for education. There is looting too. Every time it rains, topsoil washes away and artifacts—pot- sherds and even cuneiform tablets and statuettes—emerge on the surface of the ground. Although Abdullah believes Sherqatis respect the site too much to steal, it wouldn’t be difficult to pick up a few things and traffic them on the black market.

We walked west, to where three broad arches of the Tabira Gate glowed like bronze in the amber light of early evening. The structure is thought to date to the 14th century B.C. Though the gate is still the best-preserved monument at the site, it sustained heavy damage in 2015 when ISIS militants, having conquered the area, blew a hole in the structure. In 2020, three years after the area’s liberation, a joint project between the American University of Iraq-Sulaimani and the Aliph Foundation, a group that works to protect cultural heritage in war zones, carried out reconstruction work on the gate. By the time I visited, the contemporary mud bricks had bedded in nicely.

Still, Abdullah remains anxious about threats to the site. His greatest worry is the planned construction of a dam 25 miles south, at Makhoul. The dam was first proposed in 2002. The following year, Unesco named Assur a World Heritage site in danger, cautioning that the reservoir could flood numerous nearby archaeological sites. The project was halted by the overthrow of Saddam Hussein, but, with fears of regional water shortages, the government in Baghdad revived the plan. In April 2021, workers laid a cornerstone, and excavators and other construction vehicles have since appeared at the site.

Khalil Khalaf Al Jbory, head of archaeology at Tikrit University, estimates that more than 200 archaeological sites near Sherqat are at risk of flooding. Assyrian sites, constructed primarily of mud, would be lost forever. He also pointed to what he called a “social disaster,” with tens of thousands of people facing displacement. “The government is not listening,” Al Jbory told me. “Not to the academics, or geologists, or anyone. It’s very dangerous, and very risky.”

Abdullah had not lost hope, but he agreed that Assur’s future was dire unless something could be done to alter the plans. “When I say this is my grandmother, I mean that I also see her wrinkles,” he told me. “She needs help now.”

Emily Garthwaite and Leon McCarron received financial support to work on this story from the Amersi Foundation and the Abraham Path Initiative.

Photojournalist Emily Garthwaite is based in Iraqi Kurdistan and focuses on humanitarian and environmental stories.

Leon McCarron's new book is Wounded Tigris: A River Journey Through the Cradle of Civilization.