During the first days of spring, Kurds celebrate Newroz, their traditional New Year. In Erbil, the capital of the autonomous region of Iraqi Kurdistan, festivals draw crowds into the streets. Women wear beaded head scarves and long, sequined dresses, gold like the sun on the Kurdish flag. Men, some with guns tucked ceremoniously into wide gray belts, join hands and dance in loose circles. The pulse of Kurdish pop music mixes with chants of “Long Live Kurdistan.” At such times the flag-bedecked city seems close to what it dreams of becoming: the capital of a nation-state for the Kurdish people.

Kurds, an ethnic minority established in the region for thousands of years, have large populations in Turkey, Iran, Iraq and Syria. They share history and language but have never had a country of their own. That fact has shaped Kurdish identity for generations. Recently, though, Iraqi Kurds, who number about five million, seemed destined for independence. The Kurdistan Regional Government, known as the KRG, administers to a territory roughly the size of Switzerland and has its own military. A robust Kurdish-language media includes newspapers and TV networks. “The Kurds deserve a better future,” KRG foreign minister Falah Mustafa Bakir told me in December.

Iraqi Kurds have a long history of oppression—by the Ottomans, by the British. When Saddam Hussein was in power, Kurdish fighters, called peshmerga, launched insurgent attacks from the mountains. Saddam’s forces razed villages and imprisoned and tortured tens of thousands of Kurdish rebels and civilians. In 1988, he launched an infamous chemical weapons attack that killed thousands.

Then, last year, Iraqi Kurds found themselves at war, defending their homeland against the advancing forces of the Islamic State, also known as ISIS. Kurdish families sent sons and husbands to the front lines; businesses closed; investors withdrew. In August, U.S. air strikes helped shield Erbil from attack, but months later the city remained shaken. The fighting has underscored the Kurds’ sense of isolation; even the U.S., which supports Kurdish military efforts against ISIS, objects to Kurdish independence on the grounds that it would break up a unified Iraq. Meanwhile, a dispute with Baghdad over oil revenues left the region painfully short of cash, and when Masoud Barzani, the KRG president, stated the region’s intention to hold a referendum on independence from Iraq, relations with Baghdad were further strained. By winter’s end, Iraqi Kurds felt safer, but wary.

On the spring-green hills outside of Erbil this past March, families picnicked and flew kites in a quieter show of holiday spirit. But there was resolve, too. This year’s festival would be “commemorated in a different way,” said Kurdish politician Barham Salih. It would be a “Newroz of defiance.” 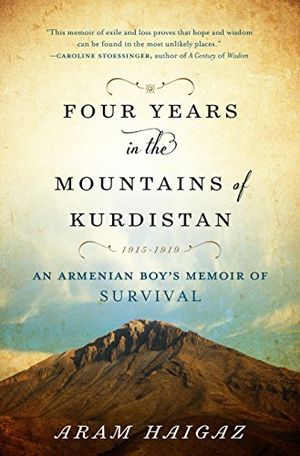 Four Years in the Mountains of Kurdistan: An Armenian Boy's Memoir of Survival

Armenian Aram Haigaz was only 15 when he lost his father, brothers, many relatives and neighbors, all killed or dead of starvation when enemy soldiers surrounded their village. Aram spent four long years living as a slave, servant and shepherd among Kurdish tribes, slowly gaining his captors’ trust. He grew from a boy to a man in these years and his narrative offers readers a remarkable coming of age story as well as a valuable eyewitness to history.

Based in Istanbul, Jenna Krajeski covers the Kurdish minority in Turkey, Syria and Iraq. Krajeski, who has received grants from the Pulitzer Center on Crisis Reporting, has published in Slate, Harper's, the New Yorker and the Atlantic.