Fighting to Be American

For centuries immigrants who served in the military could become American citizens. But are the women and men pictured here among the last? 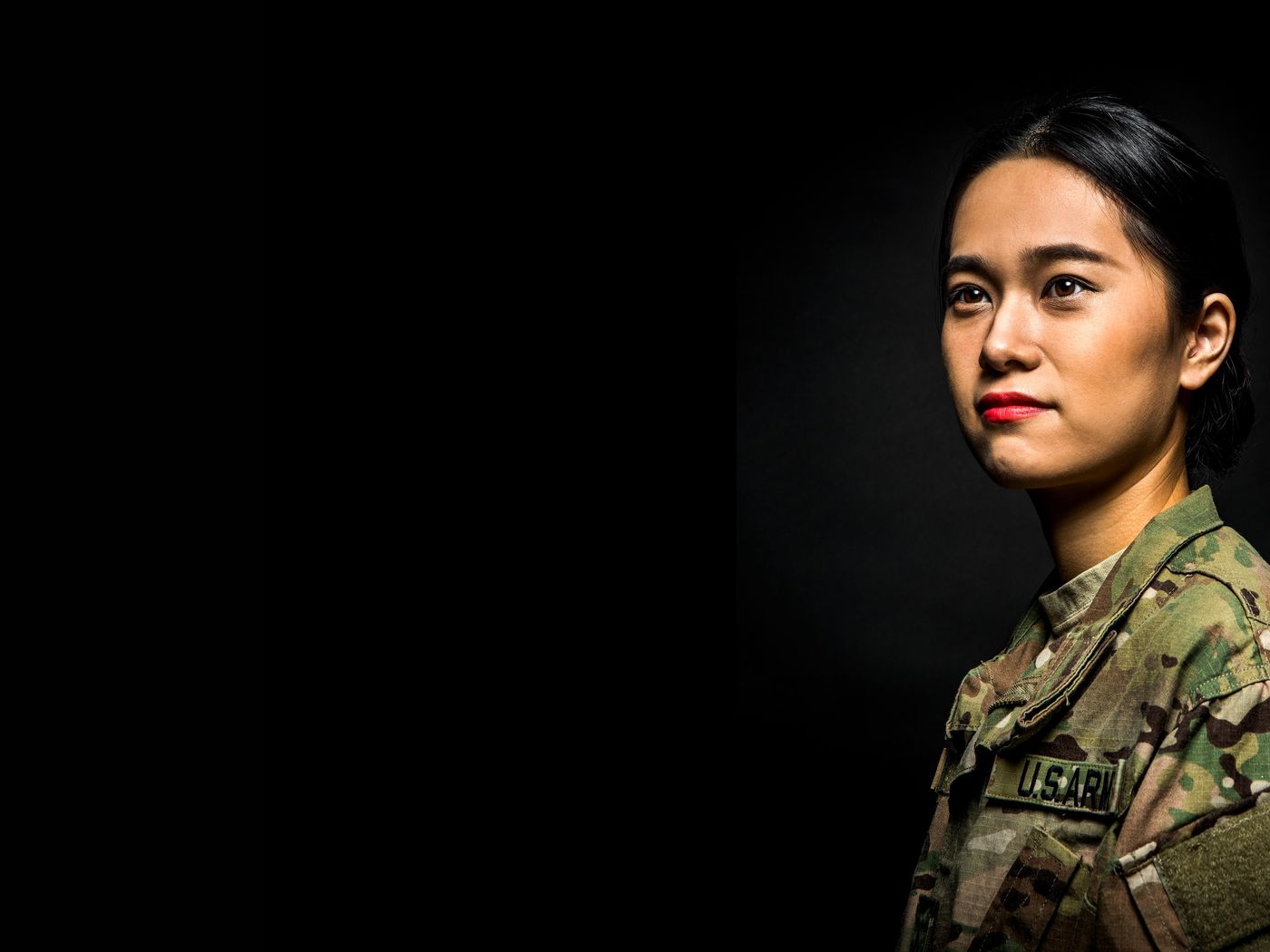 On a sweltering summer morning in downtown Los Angeles, more than 8,000 men, women and children made their way to the L.A. Convention Center. With street vendors hawking an array of citizenship-related merchandise (including fast-selling embossed covers for naturalization certificates), parking lot attendants whistling and waving towels to woo motorists, and groups tailgating with breakfast burritos and iced coffees, the festive atmosphere felt more like the run-up to a football game than a legal proceeding.

Among the thousands of people who would take part in that day’s two successive swearing-in ceremonies and become naturalized U.S. citizens were 25 who had already made a big commitment to the nation as service members—individuals who had taken an oath to protect the rights of U.S. citizens even though they themselves did not have those rights.

The United States has a long history of immigrants serving in the military, from the Revolutionary War on. While military service has never been a guarantee of citizenship, it has often led to it. Immigrants made up nearly one-fifth of America’s armed forces during World War I. Today an estimated 20,000 noncitizen immigrants serve in the U.S. military.

Many of the service members at the Los Angeles ceremony acknowledged that the promise of citizenship contributed to their decision to enlist. (To join the military, an immigrant must possess a permanent resident card, or “green card,” live in the United States and hold a high school diploma or GED.) But there were other reasons as well. Marine Cpl. Kevin Alvarez, a native of Colombia, said that international events are what finally motivated him to sign up. “I started seeing what was going on with refugees. There were Syrians trying to get across a body of water to Greece and they ended up drowning. It really resonated with me, and I decided I wanted to be in the Marine Corps. I wanted to help.”

Army National Guard Pfc. Jesus Collazo, who was born in Mexico, said that his lifelong goal was to be in the U.S. military and that potential citizenship played no role in his decision to volunteer. After graduating from high school, in Fontana, California, where he’d lived since he was 5, he tried to enlist in the Army, but was told he couldn’t because he was not a legal permanent resident. “That’s when I found out I wasn’t a U.S. citizen,” says Collazo. “It was a slap in the face. I didn’t know I wasn’t a citizen until I was 17.” He gained lawful residency ten years later when he married a woman who is a U.S. citizen. He joined the Army three weeks later.

It wasn’t until decades after serving in the Marines during the Vietnam War that Nick Warren, who had emigrated from Greece as a boy, even considered becoming a citizen. “Citizenship never crossed my mind. My life was fine. What was the point?” But when Warren, a truck driver, discovered the federal government had imposed stricter requirements in 2017 to maintain his commercial Class A driver’s license, he began the citizenship application process. “I wanted to keep my job. That was my motivation.”

As the thousands of people representing 128 countries filed into the convention center for the two ceremonies, the military members, most in uniform, were escorted to seats in the front row. Many were surprised by the preferential treatment. Marine Cpl. Bong Cho, a native of South Korea, appreciated the gesture but played down the event itself: “I don’t really consider this to be a big day. When I swore in as a Marine, that was a big day. That changed my life forever.”

For Ifeanyichukwu Okoro, a specialist in the Army Reserve who grew up in Nigeria, the day brought an overwhelming sense of relief. He is part of a special program, Military Accessions Vital to the National Interest (MAVNI), authorized in 2008 during the George W. Bush administration. The initiative recruited immigrants with valuable foreign language or medical skills by offering expedited citizenship in return for military service. But the Obama administration introduced additional requirements in late 2016, and the Trump administration announced in late 2017 that the program had been suspended. (MAVNI participants who filed for citizenship before then remained eligible, but their status is often unclear. Some have been discharged.) Unlike other immigrants serving in the military, MAVNI recruits have no green card prerequisite; Okoro said the program’s discontinuation left him “in limbo,” with no defined immigration status to fall back on if his citizenship were denied. The uncertainty lasted nearly a year before his application was approved. “I feel like I can start my life again. It’s been really tough. To say it’s been stressful would be an understatement. And it’s not just me. There are thousands of MAVNIs going through this. Now my stress will be having to see them go through it, too.”

Changing immigration policies also created difficulties for Army Reserve Pfc. Xiao Meng Sun during her two-and-a-half-year application process. When her father died in China in 2016, she didn’t attend his funeral there, because she feared the new immigration restrictions would prohibit her from re-entering the United States, regardless of her military status. “I was devastated,” she said.

The Trump administration has attempted to impose additional hurdles for lawful permanent residents (green card holders) who want to serve in the military. Those efforts have thus far been blocked by the courts.

Once Federal Judge Martin Barash administered the oath of allegiance and spoke about their new responsibilities and privileges, he singled out each service member by name (the only new citizens offered this recognition), and the crowd responded with standing ovations.

For Okoro, this show of appreciation was particularly heartwarming, given the unusual circumstances for immigrants in the military. Until that moment, he admitted, “It bothered me that I served my country, but I didn’t have all the rights of citizens.”

As the ceremony concluded, the military members were asked to stand again, and Judge Barash came down from the stage and spoke with each one privately while the thousands in the hall sat patiently for almost 15 minutes. Now citizens, the service members were the first to leave, marching out to more applause. Warren, who had insisted that he was becoming a citizen only to keep his truck-driving job, appeared quite emotional, pursing his lips and squinting as he stared forward intently. “I didn’t expect to be moved like that,” he said, holding his naturalization certificate. “I couldn’t believe the applause we got. The whole thing, it was really special.”

Christie Hemm Klok is a photographer whose work has appeared in The Atlantic and WIRED.

Robb Bradley is a freelance journalist based in Los Angeles.