By 30 B.C., the aspiring Roman dictator Octavian had dispatched all the meaningful enemies who stood between him and absolute rule over the fraying Roman republic. Octavian, the young man named by the assassinated Julius Caesar as son and heir in his will, had long been consolidating power while hunting the conspirators who stabbed Caesar to death on the floor of the Senate 14 years earlier.

Already, a half-dozen of the assassins had fallen. In October of 42, the forces of Octavian and Mark Antony, Caesar's former deputy, triumphed over those of Marcus Junius Brutus and Gaius Cassius, the two men who had led the plot, at Philippi. In 35, allies of Octavian and Antony captured and executed Sextus Pompey, heir to Pompey Magnus—Julius Caesar's political brother-turned-arch-nemesis—whose naval forces had been harrying them. Once they had eliminated their shared enemies, of course, Antony and Octavian turned on each other. In September of 31, Octavian's forces routed those of Antony and Cleopatra at the Battle of Actium. No one left, it seemed, could challenge Octavian's absolute power. Thus, the assassins who sought to thwart one dictator inadvertently paved the way for another.

Yet at least one thorn remained: a seaman named Claudius Parmensis, the last living participant in the plot against Julius Caesar. Parmensis had taken refuge in Athens, where he wrote poems and plays, enjoyed literary acclaim among the Athenians and kept one ear pricked at all times to the steps of an approaching assassin.

The history of the end of the Roman Republic—the sweeping battles on land and sea, the poignant historical ironies and above all the iconic men who shaped the course of history—is well known. Less widely known is the fate of the “minor” assassins of Caesar: those who played important roles in the plot, and throughout the ensuing civil wars, but who don't make a big splash in Shakespeare's Julius Caesar or Antony and Cleopatra. In his new book, The Last Assassin: The Hunt for the Killers of Julius Caesar, Peter Stothard, former longtime editor of the London Times and the Times Literary Supplement and the author of several books about the ancient world, rescues these minor men from historical obscurity and uses their fates to tell the most page-turning account in recent memory of this otherwise well-trodden history. 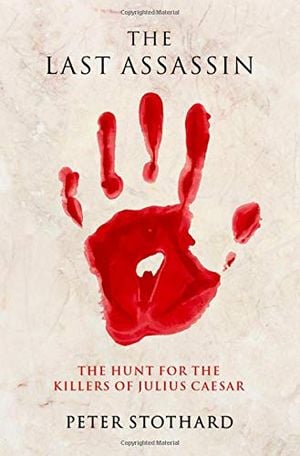 The Last Assassin: The Hunt for the Killers of Julius Caesar

The Last Assassin dazzlingly charts an epic turn of history through the eyes of an unheralded man. It is a history of a hunt that an emperor wanted to hide, of torture and terror, politics and poetry, of ideas and their consequences, a gripping story of fear, revenge and survival.

Claudius Parmensis' name will be unfamiliar even to those who know a fair bit about the fall of Rome's nearly 500-year-old republic and the beginnings of its imperial phase. Yet the story of this marginal figure reveals a great deal about the bigger changes of the period, as Stothard elegantly demonstrates. Stothard uses the tale of Parmensis—“one of the lesser wielders of the daggers on the Ides of March, one of the common herd of conspirators,” as he writes in the book—to evoke the ways that ordinary citizens throughout the Mediterranean would have experienced or understood the extraordinary events unfolding all around them.

“The history of the major men has been told so many times,” says Stothard. “It's just full of straight lines. If you look at the same event from the point of view of the smaller people, it makes you see the bigger players in a new way. The picture looking up from the bottom, or from the side, can often get you closer to the experience of people who were there on the spot than pretending that you're Julius Caesar or Brutus.”

Parmensis was one of these “smaller people,” a back-bencher in the plot against Caesar who managed to outlast his 18 fellow assassins, outliving Brutus and Cassius by 12 years. Yet he shared a philosophy with many of his fellow plotters, namely the enlightened, anti-superstition school of Epicureanism, which held that the gods, if they existed at all, were far away and not interested in human affairs, and that people should use their reason to moderate their passions, thereby avoiding pain and achieving inner peace—a fashionable philosophy among the educated classes of Rome during this period. Stothard vividly narrates how Epicureanism served as a mobilizing philosophy among the assassins, even as they argued over whether the true Epicurean would go so far as to assassinate Caesar, who was, after all, a Roman consul.

Stothard says this philosophical dimension to the assassination and ensuing civil wars sometimes gets overlooked.

“To what extent were you justified in getting rid of a tyrant? How bad did a ruler have to be before you were justified in committing the country and half the world to civil war?,” Stothard says, posing the questions that animated the plotters. “There were people with very similar views to Gaius Cassius and Cassius Parmensis who said that no matter how bad Caesar was, civil war was worse, and the best thing to do was just retreat to your garden, if you could afford it, settle down and concentrate on your personal peace. There were other people with very similar views who said if someone like Julius Caesar is in charge of the whole world, you could never get personal peace.”

Not that all the plotters were quite so high-minded. “For some, it was pure personal pique," Stothard says. “‘Caesar gave away my land to his mistress’; or ‘Caesar didn't help me get a job I should've gotten’; or ‘Caesar didn't give me money that I thought he should've given me.’ But they were in league with people who'd thought through, in a very complex way, what kind of future they were justified in trying to achieve or prevent.”

Stothard says one “tangential influence” that partly inspired him to focus on Parmensis came from an unlikely source—the exiled Russian oligarch Boris Berezovsky, who brought up Parmensis during a conversation in London in 1998. Known as “the Godfather of the Kremlin” and once considered Russia's second-richest man, Berezovsky had helped boost the 2000 presidential run of his former protégé Vladimir Putin but soon ran afoul of the new president and moved to the United Kingdom for his safety, where MI6 reportedly foiled at least one murder plot against him. (Berezovsky had also been an ally of Alexander Litvinenko, another exiled Russian oligarch, who was assassinated via polonium poisoning in 2006.)

“[Berezovsky] was one of those Russian exiles who was in permanent fear of assassination,” Stothard tells me. “And he was an oligarch—not a group noted for devotion to the classics—so he didn't seem a very promising person to give you ideas about ancient history.” Nonetheless, Berezovsky had developed a fascination with the fate of Parmensis, and wanted to talk to Stothard about it; the Russian understandably identified with this ancient figure who evaded a dictator's vengeance for 14 years. In 2013, 12 years into his own exile, Berezovsky was found hanged in his bathroom. “Many thought he had been assassinated,” Stothard says. The coroner said he was unable to offer a conclusive verdict about how the death had taken place.

While Stothard is careful not to make any pat comparisons between Roman history and politicians in today’s world, he can't help hearing an echo of Julius Caesar's rhetoric in certain precincts of American politics. To him, President Donald Trump’s successful populist strategy in the 2016 election came straight from “the ancient playbook.”

As for Parmensis, he discovered, like Berezovsky, that living in public view during exile carries risks—even in Athens, which was then full of men like Parmensis who had been on the losing side in the ongoing civil wars. Toward the end of his exile, Parmensis was beset by nocturnal visions of a vengeful monster lurking outside his gates. Summoned by their frightened master night after night, his slaves would reassure Parmensis that no sinister figure stood at the gate. Until one day there was.

Quintus Attius Varus, a loyalist to Octavian, arrived in Athens in the summer of 30 B.C. and promptly removed Parmensis' head from his body. The assassins were dead. The world they had unwittingly created was just beginning.