At age 15, Herschel Grynszpan was just another Jewish refugee fleeing Nazi Germany for safe haven in pre-war France. Like the 50,000 others that crossed the border to outrun Adolf Hitler’s reach, Grynszpan received a cold reception in his new country. Anti-Semitism was on the rise; Jewish refugees lived in the poorest parts of cities or were prevented from entering the country at all. The Munich Pact of September 1938 meant France was going to great lengths to prevent war with Germany—and that meant appeasing the Führer.

By age 17, however, Grynszpan was perhaps the most famous Jew in the world. After receiving word that his family had been forcibly removed from their home in Germany and deposited at the Polish border, Grynszpan sought revenge. The morning of November 7, 1938, Grynszpan bought a gun and went to the German Embassy in Paris. He didn’t have a clear target—he just wanted to make a point the world couldn’t ignore. When he was ushered into the office of a young diplomat named Ernst vom Rath, Grynszpan shot him without even knowing his name. He willingly submitted to arrest by the French authorities, and immediately made a statement about the treatment of Jews at the hands of the Nazis.

But Grynszpan’s plan backfired horrifically. The murder was used by Hitler and his minister of propaganda Joseph Goebbels as justification for the violent riots of Kristallnacht, which started just two days later. According to the Nazis, Grynszpan’s actions proved the Jews of the world would stop at nothing to destroy Aryan Germans. The only reasonable action was to attack the Jews first. 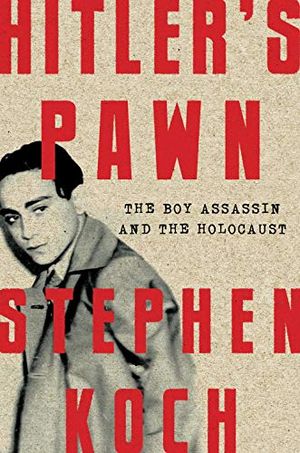 Hitler's Pawn: The Boy Assassin and the Holocaust

A remarkable story of a forgotten seventeen-year-old Jew who was blamed by the Nazis for the anti-Semitic violence and terror known as the Kristallnacht, the pogrom still seen as an initiating event of the Holocaust.

The assassination and the years-long game of cat and mouse that came next is the subject of a new book by writer Stephen Koch. Hitler’s Pawn: The Boy Assassin and the Holocaust follows Grynszpan from French prison to German concentration camp as the Nazi regime shuttled him from place to place in the hope of using him as a set-piece in their farcical trial against “world Jewry.” Grynszpan was initially held for 20 months without indictment in French prison, sharing his story with the world as a media darling. But once the war broke out in 1939, Grynszpan lost some of his appeal—at least to the Allied Forces. For the Nazis, he was still an enticing prisoner to be used in a propaganda trial against the Jews. And when France fell to Germany, Grynszpan was quickly handed over.

Yet even as he was interrogated and sent from one prison to another, the young man managed to thwart the Nazis’ plan. Grynszpan reverted to a lie that transformed his political assassination into a crime of passion, fabricating a gay relationship with vom Rath in order to discredit the victim and the Nazis more generally. Even knowing their prisoner was lying, the Nazis feared the smear so much that case never went to trial.

Although Grynszpan succeeded in preventing a trial from going forward, all traces of him vanish after 1942. Whether he was murdered by the Nazis at that time or later has continually been debated. Historians have generally claimed the Nazis killed him before the end of the war, as no trace of him ever appeared afterwards. In 2016, archivists even claimed to have found a photo of Grynszpan from 1946, at least a year after he was supposed to have been dead, but even that isn’t definitive proof of what happened to him.

To learn more about this little-known figure and his role in the World War II, Smithsonian.com spoke with author Stephen Koch, who relied on research by European scholars to write his story.

What parallels do you see between this story and the murder of the Archduke Franz Ferdinand in World War I?

I did certainly think about the Sarajevo event. And 1938 was only 24 years after the event in Sarajevo. All of Europe, which was still shell-shocked from World War I, would have thought of it, too. The key difference between the two killings is that Ernst vom Rath was not a particularly important diplomat. He was not the archduke. Hitler wanted to get the impression out there that it was the ambassador that Herschel had come to.

But it’s hard to overestimate the degree to which people in Europe feared the return of the slaughter of the First World War. First of all, the shooting was actually an isolated incident. It would now be absolutely forgotten if Goebbels and Hitler had not decided to use it as their pretext for Kristallnacht. By a grotesque irony, it accomplished what Herschel set out to do— alert the world to the criminality of the Hitler regime.

Would Hitler have preceded with Kristallnacht without someone to blame it on?

Yes. One of the important things about Hitler’s expansionism and his more outrageous actions was that he always wanted some pretext and was prepared to have the Gestapo create a pretext when necessary so that he could say something was causing an intense reaction on the part of the German people.

Why did Hitler think he needed to justify his regime’s actions to the world?

Hitler wanted to look like a head of state, and heads of state were not supposed to set up riots that killed people. Hitler did his best to look like he was a mere bystander at Kristallnacht and it had all been Goebbels’ idea.

His expansionism was always based on the idea that he had some kind of claim on the countries he invaded or took over. These pretexts were usually pretty ridiculous, but nonetheless, his propaganda machine would emphasize it tremendously to convince the German people. He wanted people to believe that he was, as the leader of a resurgent newly powerful Germany, asserting German rights in the world.

Did the Nazis actually believe their own propaganda? That Herschel was a pawn of some Jewish conspiracy?

It’s one of the most extraordinary paranoid fantasies maybe in modern history. But take the two functionaries who were in charge of organizing propaganda and policy around Herschel — Friedrich Grimm and Wolfgang Diewerge. Both of those men had previously come together in an incident in which in Switzerland, an important Nazi had been assassinated by a Jewish fellow named David Frankfurter. They seized on this as an example of world Jewry trying to destroy German resurgence. But the fact is that these “Jewish crimes” on a large scale were entirely paranoia.

Herschel Grynszpan was fully aware of what he was doing when he shot vom Rath. How did that affect him later on?

Herschel was torn himself in a way that defined the rest of his life. On the one hand, he felt he had done something almost heroic, something wonderful, something that had helped wake up the world to evil. On the other hand, he was horrified by Kristallnacht and that he was used as the pretext. He fasted and prayed every Monday for the rest of his life in penance for having been used in this way and also for having murdered an innocent man.

How did the world reaction to his crime?

He was used by Goebbels and German propagandists as part of a huge anti-Semitic fantasy and he was used by anti-Nazis like [American journalist] Dorothy Thompson and many others as an example of a tragic child who had been driven to a rash action by Hitler’s crimes. Thompson said, “I want higher justice for this boy.” Isn’t it possible to understand why this child did something that was politically foolish and maybe even immoral, but why he did it after the persecution that has family had been through?

Those divided feelings had an impact on the trial, too. Can you talk about why it was delayed in France?

Georges Bonnet, as foreign minister, had a fear [of the outcome]. Let’s say Herschel is tried and acquitted. Hitler would be enraged. Let’s say Herschel was tried and sent to the guillotine. The world would be enraged. Bonnet didn’t see any way of handling it that was a winning hand. So he did everything he could to stop it. As time went on and Hitler’s reputation went steadily down [in France and elsewhere], it looked more and more like Herschel would be outright acquitted.

France gave Grynszpan to the Gestapo after their country fell to the Nazis. How did Herschel’s attitude change between his imprisonment in France and when he was taken to Germany?

[At first] Grynzspan wanted to make his case honestly—that his people were being persecuted and that he was protesting.

Then, after he was captured by the Germans, he had to remove himself from history, make himself invisible again, which is what he set out to do [by lying about the relationship he had with vom Rath so the Nazis wouldn’t go forward with the trial]. That’s the heroic part of it that I find very touching. We don’t even know how he died, but we do know he died forgotten. No one cared about Herschel Grynszpan anymore.

Is there one theory that you think is more probable for Grynszpan’s death?

I tilt toward, without certainty, the idea that he survived late into the war. [Nazi war criminal] Adolf Eichmann’s testimony at his Jerusalem trial was that he met Grynszpan late in the war. That was not 1942, that was more like 1944. Another German official said he knew that the case was never dropped but periodically reviewed.

The mystery is, why does everything in the German record stop, vanish, after the decision to put the kibosh on the trial in May of 1942? Eichmann said his associates interrogated Herschel and filed a report, but there is no report in the files.

What do you hope readers get out of the book?

First of all, a tragic story. A kid did something that he hoped would be right and heroic, and it turned against him. A kid who was used for evil purposes then found a way to defeat an evil purpose. Herschel Grynszpan is in the history books usually for maybe five lines, and that’s the end of it.