On June 4, 1919, the U.S. Senate followed the U.S. House of Representatives in passing what would become the 19th Amendment, which removed “sex” as a legal basis for denying citizens the right to vote. One triumphant woman—then known as Helen Hamilton Gardener—rushed to attend the signing ceremony. After all, she’d planned it—down to purchasing the fancy gold pen that Vice President Thomas Marshall and the Speaker of the House Frederick Gillett would use to endorse the amendment before sending it off to the states for ratification. Flash bulbs captured her standing proud, and her image appeared on front pages across the nation. Days later, Gardener craftily arranged for the Smithsonian Institution to recognize the achievement with an exhibition on the suffrage movement, a first in the entity’s history.

Gardener hadn’t begun the century as the high-ranking member of the National American Woman Suffrage Association (NAWSA) she’d become by 1919. Rather, she had made a name for herself as a writer, lecturer and “freethinker” who crusaded for divorce reform and raising the age of sexual consent for girls. (In 1890, it was 12 or younger in 38 states.) Her iconoclastic career was rooted in personal experience: Born Mary Alice Chenoweth, at the age of 23 she’d been pilloried in Ohio newspapers for having an affair with a married man. Rather than retreat in shame, she changed her name, moved to New York City and spent the rest of her life challenging the sexual double standard.

While close friends with leading suffragist Elizabeth Cady Stanton, Gardener didn’t initially join NAWSA because she objected to the group’s use of religious arguments and alliance with the Woman’s Christian Temperance Union. But by 1910, the organization’s message had shifted, and Gardener quickly became NAWSA’s “most efficient volunteer worker in Washington” and their “diplomatic corps,” organizing marches, delivering congressional testimony, and lobbying members of Congress and President Woodrow Wilson behind-the-scenes. 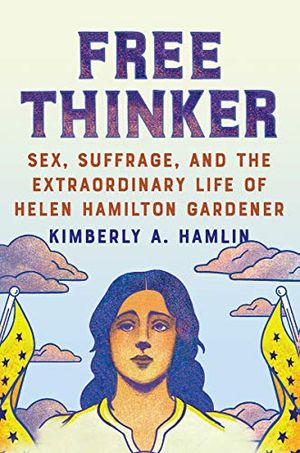 Free Thinker is the first biography of Helen Hamilton Gardener, who died as the highest-ranking woman in federal government and a national symbol of female citizenship. Opposed to piety, temperance and conventional thinking, Gardener eventually settled in Washington, D.C., where her tireless work proved, according to her colleague Maud Wood Park, "the most potent factor" in the passage of the Nineteenth Amendment.

After the “Susan B. Anthony Amendment” (named after the famed suffragist) passed Congress, most of Gardener’s fellow activists turned their focus to securing ratification in the required 36 states. Gardener, on the other hand, remained in Washington as a one-woman office for NAWSA.

Her first challenge was to figure out where to place the many relics displayed at NAWSA’S shuttered D.C. office, known as Suffrage House. Gardener understood the political power of storytelling, that the stories we tell about our past shape our present and our future. She feared that if the United States failed to commemorate women’s rights activists, future generations of women would be hampered in their efforts to participate in democracy and attain true equality.

A week and a day after the historic Senate vote, Gardener secured an introduction from the White House and reached out to William Ravenel, the administrative assistant to the secretary of the Smithsonian at the time, to inquire about donating a portrait of Anthony, along with other suffrage memorabilia. The previous year, curator Theodore Belote had turned down the very same portrait, noting “this is of no special interest to the Division of History. It might be regarded as a desirable addition to our series of portraits of noted Americans but exhibition space is in demand.”

But when Gardener’s letter arrived just days after the amendment’s passage, the historic value of a portrait of its namesake had evidently become apparent. Curator William Holmes claimed that the painting was not of sufficiently good quality to adorn the art galleries but suggested that it would fit in the Smithsonian’s history collections, since “Miss Anthony’s life forms a most interesting episode in the history of woman’s place in the nation.” (Today, these items reside in the collections of the Smithsonian’s National Museum of American History; some will be on view in the new “Creating Icons” exhibition.)

Securing women’s place in American history had long been a NAWSA priority. In 1909, its education committee had surveyed history and civics textbooks to see how women were rep- resented. The committee chair ruefully reported that textbooks conveyed the point that “this world has been made by men and for men.” NAWSA also distributed volumes of Elizabeth Cady Stanton, Susan B. Anthony and Matilda Joslyn Gage’s the History of Woman Suffrage to schools and libraries across the country hoping to influence how U.S. history was taught. Gardener saw the Smithsonian exhibition as another way to secure women’s rightful place in American memory.

In addition to the portrait that hung in the NAWSA office, many of the movement’s most prized artifacts had come to Gardener via Lucy Anthony, Susan’s niece, and Lucy’s partner, Anna Howard Shaw, the former NAWSA president, whose health was failing. (She would die later that summer, several months before she would have been eligible to cast her vote.) The two women asked Gardener to find a suitable home for these heirlooms. By the end of June, Gardener had compiled the items for the Smithsonian donation, including: the red shawl that Susan B. Anthony wore at suffrage conventions, a copy of the 1848 Declaration of Sentiments and Resolutions, the table on which Stanton drafted the declaration, photos of the congressional signing ceremonies and the gold pen Gardener had purchased for the momentous occasion. Lucy Anthony expressed great hope for the exhibit Gardener was working toward, describing it as “a crowning glory to everything.”

Gardener’s initiative ran contrary to the directive given by NAWSA president Carrie Chapman Catt, who had wanted the Anthony portrait given to Washington D.C.’s Corcoran Gallery. Gardener explained to her colleagues the unique mission of the Smithsonian to house the nation’s most important artifacts. Seeing a portrait of the signing of the Declaration of Independence had convinced her that the Smithsonian “was the place for our Thomas Jefferson’s portrait.” Gardener’s aim was to make suffrage history tangible to the thousands of “men, women and children, from all over the world, now and in the future” who would come to the Smithsonian to “gather inspiration and to come close to the great leaders of America, through seeing what they looked like, and what they were, and what they had, and what they did.”

In her correspondence with Ravenel, Gardener detailed very specific conditions about the placement and significance of the donation. She insisted that “above all else this exhibit be kept all together in the most suitable place you can prepare for it, because these few things that we now have sent will not be the end of the historic collection to show the origin and development of the greatest bloodless revolution ever known,—the achieving of political and financial independence by one-half of the people without a drop of blood being shed.”

And she emphasized, more than once, that the exhibit represented the work of the National American Woman Suffrage Association. The exhibit must never mention or be associated with, she instructed, the National Woman’s Party (NWP) led by Alice Paul. The animosity between NAWSA and the NWP stemmed from their opposing approaches to the shared goal of federal suffrage. The NWP took more militant and partisan action, campaigning against all Democrats, picketing the White House and even going on prison hunger strikes. The NWP’s strident advocacy, inspired by British suffragettes, often foiled NAWSA’s comparatively moderate efforts (including Gardener’s behind-the-scenes lobbying and use of social connections) and alienated the Wilson White House, which Gardener charmed her way inside. While Paul and Gardener had worked side-by-side to orchestrate the landmark 1913 suffrage march, Paul and her group of suffragists (decisively not “old fogeys,” she wrote) officially split with NAWSA the following year. Both groups played instrumental roles in passing the 19th Amendment, yet Gardener’s exhibit presented a slanted history, with one faction representing the entire movement and leaving out women of color entirely.

In 1920, months before the 19th Amendment was ratified by the states, the exhibit “An Important Epoch in American History” debuted at the Smithsonian. Gardener told Lucy Anthony that she did not think they could have had better placement within the museum, but privately confessed, “I do think that the Smithsonian matter will never be finished and done right until they understand it and its meaning better than they do now.” Men seemed to understand history in terms of war; they underestimated and misunderstood the stakes and sacrifices of what Gardener called the “greatest bloodless revolution.”

Five years after suffrage activists had secured the 19th Amendment, Gardener was busy with her work as the highest-ranking and highest-paid woman in federal government as a member of the U.S. Civil Service Commission. She remained preoccupied, however, with how history would remember the suffragists. She pushed the Smithsonian to update the exhibit to include a portrait of Stanton and unsuccessfully lobbied Ray Stannard Baker, President Wilson’s official biographer, to “make plain” that Wilson was “the only President who ever turned his hand over to help women in their long struggle for emancipation.”

If presidential historians would not remember suffrage, Gardener hoped at least that younger women would. At the NAWSA “Looking Backward” luncheon in April 1925, Gardener delivered what would be her last public speech, “Our Heroic Dead.” First, she announced that merely calling the roll of the movement’s deceased leaders would take more than her allotted time. But she was tempted to do so because so many of the pioneers’ names were already unfamiliar to “the workers of today.” Gardener reminded her audience that the earliest women’s rights leaders faced the “hardest of all tests to bear”—opposition from fathers, husbands and sons. After having braved public scorn and overwhelming obstacles, these intrepid women endured “constant opposition at their own firesides.”

Gardener pondered how suffrage would be remembered and what it would take for women’s rights leaders to assume their deserved place in the nation’s collective memory. In the early 20th century, civic leaders had rushed to honor Civil War veterans, Union and Confederate, in a host of statues, parks, and monuments, including the Lincoln Memorial, which had been dedicated in 1922. And much of Washington’s existing landscape paid tribute to the Revolutionary heroes. Gardener contended that Lucretia Mott, Susan B. Anthony, Elizabeth Cady Stanton and Lucy Stone were “the George Washington, the Thomas Jefferson, the Alexander Hamiltons of the woman’s revolution.” It did not occur to her to include the names of the pioneering African American women she had encountered, such as Mary Church Terrell and Ida B. Wells. Where were the public shrines to these women? Who would pay homage to them?

During the ratification drive, the NWP had commissioned sculptor Adelaide Johnson to create a new statue depicting Anthony, Stanton and Mott for inclusion in the Capitol building. After tireless lobbying, this statue, known as the Portrait Monument, was displayed in the Capitol rotunda for just one day before being moved to the area known as “the crypt” of the Capitol. (In 1996, women raised the money to finally move it back upstairs.) For decades, the limited Smithsonian exhibit that Gardener had orchestrated remained the principal public tribute to the suffrage movement.

"Creating Icons: How We Remember Women's Suffrage" is now on view at the Smithsonian's National Museum of American History in Washington, D.C.

Kimberly Hamlin is the James and Beth Lewis Professor of History at Miami University (OH) and the author of Free Thinker: Sex, Suffrage, and the Extraordinary Life of Helen Hamilton Gardener and From Eve to Evolution: Darwin, Gender, and Women’s Rights in Gilded Age America.