Inside the Rosenwald Schools 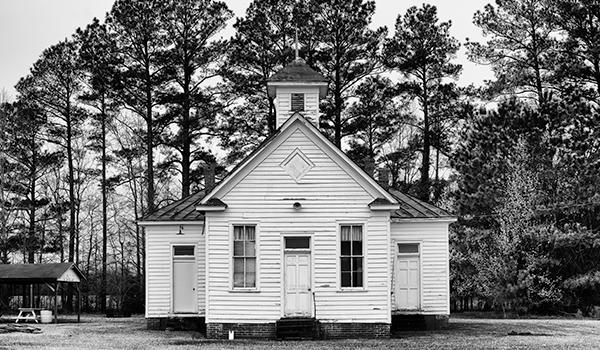 Little more than a century ago, deep in America’s rural South, a community-based movement ignited by two unexpected collaborators quietly grew to become so transformative, its influence shaped the educational and economic future of an entire generation of African American families.

Between 1917 and 1932, nearly 5,000 rural schoolhouses, modest one-, two-, and three-teacher buildings known as Rosenwald Schools, came to exclusively serve more than 700,000 black children over four decades. It was through the shared ideals and a partnership between Booker T. Washington, an educator, intellectual and prominent African American thought leader, and Julius Rosenwald, a German-Jewish immigrant who accumulated his wealth as head of the behemoth retailer, Sears, Roebuck & Company, that Rosenwald Schools would come to comprise more than one in five Black schools operating throughout the South by 1928.

Only about 500 of these structures survive today, according to the National Trust for Historic Preservation. Some schools serve as community centers, others have restoration projects underway with the support of grants from National Trust for Historic Preservation while others are without champions and in advance stages of disrepair. Eroding alongside their dwindling numbers is their legacy of forming an American education revolution.

Photographer and author Andrew Feiler’s new book, A Better Life for Their Children, takes readers on a journey to 53 of these remaining Rosenwald schools. He pairs his own images of the schools as they look today with narratives from former students, teachers, and community members whose lives were molded by the program. A collection of photographs and stories from the book are also set to be featured in an exhibition at the National Center for Civil and Human Rights in Atlanta, later this spring.

When Feiler, 59, first learned of Rosenwald Schools in 2015, it was a revelation that launched a nearly four-year journey over 25,000 miles throughout the southeast where he visited 105 schools.

“I'm a fifth-generation Jewish Georgian and a progressive activist my entire life. The story’s pillars: Jewish, southern, progressive activists, are the pillars of my life. How could I have never heard of it?” says Feiler, who saw an opportunity for a new project, to document the schools with his camera. A Better Life for Their Children

That the schools’ history is not more widely known is in large part due to the program’s benefactor. Rosenwald was a humble philanthropist who avoided publicity surrounding his efforts; very few of the schools built under the program bear his name. His beliefs about the philanthropic distribution of wealth in one’s own lifetime contributed to the anonymity, as his estate dictated that all funds supporting the schools were to be distributed within 25 years of his death. Many of the former students Feiler met with were unaware of the scope of the program, or that other Rosenwald Schools existed outside of their county, until restoration efforts gained national attention.

As Feiler outlines in the book, Rosenwald and Washington were introduced by mutual friends, and Washington lobbied Rosenwald to join the board of directors at Tuskegee Institute, the Alabama university for African Americans he co-founded. They began a lengthy correspondence about how they might collaborate further and soon focused on schools for black children.

Washington knew education was key to black Americans rising from generations of oppression. His memoir, Up From Slavery, inspired many, including Julius Rosenwald, who was impressed with Washington’s zeal for education as it aligned so closely with his own beliefs.

In the Jim Crow South, institutionalized segregation pushed rural black students into poor public schools. Municipal education expenditures were a small fraction of monies spent on educating similarly situated white children. In North Carolina alone, the state only spent $2.30 per black student was spent in 1915 compared to nearly $7.40 per white student and nearly $30 per student nationally, according to research by Tom Hanchett, a Rosenwald Schools scholar and community historian.

“Washington saw group effort as key to real change in America,” says Hanchett. “Education is one way to harness powerful group effort. If everyone can read and write, they can work together in a way they could not previously. The schools themselves were ways to bring not just children together but entire communities that were geographically dispersed.”

Rosenwald felt, too, that rural America held great promise. “Rosenwald had to think broadly about who Sears’ customers were,” says Hanchett, “The advent of rural free delivery by the U.S. Postal Service had dramatically increased Sears’ base from in-store shopping to catalog-based procurement. Having rural customers made Rosenwald more aware of the disenfranchisement for blacks, especially in education.”

Out of this collaboration came the thousands of schoolhouses across the South, which lived up to Washington’s aspirations of community togetherness for a generation. In 1954, when the U.S. Supreme Court ruled in Brown v. Board of Education that race-based segregation in schools was unconstitutional, Rosenwald schools began to consolidate with white schools over time and most of the structures were lost.

Feiler’s initial photoshoots began with exterior images, yet the schoolhouses themselves only revealed part of the story. “By far the most emotionally rewarding part of my experience was meeting people who attended, taught, and are devoting their lives to saving these schools,” says Feiler.

One of the most compelling anecdotes Feiler shares is from an encounter on his very first school visit to Bartow County, Georgia. There, he met Marian Coleman, 74, who attended grades 1 -3 at the Noble Hill School from 1951 to 1955, when the school closed. Reborn in 1989 as the Noble Hill-Wheeler Memorial Center, the former schoolhouse serves as a black cultural museum and features historical aspects of black culture in Bartow County. For 21 years, Coleman served as the center’s curator, a position now held by her niece, Valarie Coleman, 44.

Coleman’s great-grandfather, Webster Wheeler, led the effort to have Noble Hill built in 1923 with Rosenwald funds. Having left Georgia for Detroit as part of the Great Migration that saw a post-WWI exodus of black farmers from the rural agricultural South move to northern cities for higher paying industrial jobs, he worked for years as a carpenter for the Ford Motor Company. Wheeler returned home upon learning of the Rosenwald grant from family correspondence. Feiler’s photograph captures the two Colemans inside the center, holding a photograph of Wheeler that he had sent to family back home marking his arrival in a new land of promise.

Coleman recalls that even in the 1950s, the school had no electricity or interior bathroom, though nearby schools for white children had modern facilities. “I was aware other [white] schools had different standards,” says Coleman, who went on to become an elementary school teacher herself. “Many times, our parents weren't able to buy materials we needed. We had books from the white schools after they were finished with them.”

A sense of community made the greatest impression upon Coleman as a child. “My parents would always plan special things for us,” says Coleman, “There were fundraising dinners for the development of the school and folks made quilts that were raffled off. We knew they were interested in us having a better education.”

To Feiler, the connection between Rep. Lewis and the Rosenwald schools made sense; he had lived in the congressman’s district for many years. “Lewis embodied the conscience of American optimism,” he says. “Education was always a high priority to his legislative agenda.”

Feiler asked Lewis to bring readers into his Rosenwald School classroom, Dunn’s Chapel School in Pike County, Alabama, to share how his education there shaped his life. “I loved school, loved everything about it, no matter how good or bad I was at it,” Lewis writes in the book’s foreword. “Our school had a small library, and biographies were my favorite, stories that opened my eyes to the world beyond Pike County.”

Siloam School, a one-teacher classroom in Mecklenburg County, North Carolina, built around 1920, is captured by Feiler in evident disrepair, its pine siding decaying and foundation melting into a soft earthen slope. Sixty black children were registered here in 1924, according to the Charlotte Museum of History, which has undertaken an ambitious project to restore the schoolhouse as an interpretive education and community center. “Preserving Siloam School will provide context to this difficult history and a place to interpret it,” says Adria Focht, the museum’s president and CEO. “Once restored, the school will return as a community space and place for conversation, dialogue, and progress to help build a stronger, more equitable and just future.”

Like all Rosenwald Schools, Siloam’s architectural plan followed a highly prescribed manner and was developed at Tuskegee Institute as part of the Rosenwald Schools program. Detailed school plans dictated everything from the schools’ physical orientation—north- or south-facing to allow for all-day sunshine through large windows—to the color of the walls—cream or eggshell—to encourage calm and learning.

The guidelines were devised under the stewardship of architect Robert Robinson Taylor, who before becoming a professor at Tuskegee was the first black student enrolled at Massachusetts Institute of Technology and the nation’s first accredited black architect. (Taylor’s great-granddaughter, Valerie Jarrett, a former senior advisor to President Barack Obama, sat for a portrait posing with a sheet of commemorative U.S. postage stamps honoring her ancestor.)

“The story of education as a central focus of civil and human rights is an important framework for helping people understand their role in the culture, in society, and their and political and economic rights,” says Calinda N. Lee of the National Center for Civil and Human Rights. “Education is fundamental to being able to advocate for individual rights and work in solidarity with other people. This story is part of what is so compelling about [Feiler’s] work.”

Perhaps no building showcases that dynamic more than Sumner County, Tennessee’s Cairo School, built in 1922. Frank Brinkley, 79, attended Cairo School grades 1-8 from 1947 to 1958, where his father, Hutch, served as the sole teacher and principal for 23 years. “I always loved math,” he says. “When I was in 7th and 8th grade, my father let me teach and help the 1st graders with their arithmetic and math lessons.”

He continued being a teacher on through adulthood, instructing high schoolers and adults in science and mathematics. “At that time, about the only position blacks could hold in education was teaching school,” says Brinkley. “Father encouraged all his children and wanted it known that if you went to Cairo School, you were good students academically. He took a great deal of pride in knowing all six of his children graduated from college.”

Feiler’s portrait of Frank and his younger brother, Charles Brinkley Sr., embodies the dignity, pride and honor these men feel about the school serving as a vehicle to shape their family’s lives. All of Hutch’s 10 grandchildren would also continue on to college.

“I still have chills when I go back to the school,” says Brinkley. “I feel how far we have come, yet we still have a long way to go. While we are standing the shoulders of giants, our heads are still below the water.”